Fables are real. And, exiled from their worlds by (initially) unknown Adversary, they live in our world. Mainly New York, as usual ;), but not only. Centuries ago a huge army started to conquer one world after another (in a kind of multiverse where every legend has its place, and Earth acts as an Amber of sorts, the core reality where mundane people live, creating and remembering stories*). Many Fables were killed, most subjugated, some serve the new regime, but some escaped to Earth – and dream of regaining what they lost. They formed a government of sorts, with HQ in NY, and they live among us. At least those of them, who can maintain human-like form, the rest live on animal farm in the wilderness of New York State countryside.

*Willingham uses popular system, where the strength of belief in something influences its power. Popular Fables are really powerful, forgotten – decline in time.

Yes, so the comics are great, and I also recommended most of the spin-offs. The novel occupied its place on my shelves for a few years, but I’ve only read it recently. Not that I was worried it would be bad – there just always was something else. Now I’ve read it and I’m quite happy about it, but convinced Willingham should stick to comics.

END_OF_DOCUMENT_TOKEN_TO_BE_REPLACED

I love Fables by Bill Willingham. It’s one of my favourite comics ever and the only multi-volume comic book series I own a complete set of – although I’m almost there with Thorgal (3 volumes missing from the main story, spin-offs aren’t that good so they don’t count), and I will own entire Sandman one day, it’s just that this version is too expensive…

Anyway, I love Fables and (almost) all of its various extras (with exception of Jack of the Fables, main character’s a dick). The main story has 150 issues/22 volumes and I haven’t read the final one yet – I plan a great re-read before that, any time now. Then, apart from Jack of the Fables, there is Fairest, short series focused on female characters, two-volume spy thriller Cinderella and stand-alones 1001 Nights of Snowfall and Werewolves of the Heartland. Also, an album of selected covers, encyclopaedia, novel and computer game. I have it all. 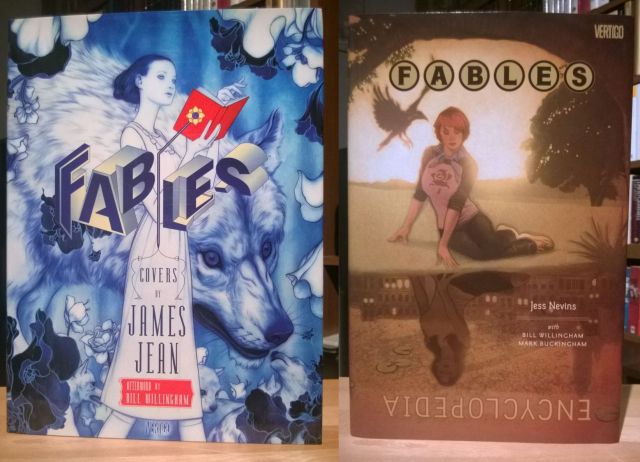