We’ve been doing many TAGs recently, but we found it’s a nice way to collaboratively write something fun quickly 😉 We still have a few we wanna do, this time – it’s the Real Neat Blog Award – many thanks to Lashaan of Bookidote for the nomination! We will be using his set of questions, so remember – there are no stupid questions, and answers are our sole responsibility 🙂

1. If you could do something better than you’re already doing right now, what would it be?

Piotrek: Organizing my time. I don’t have too much to do, just a bit more than I used to – and there goes good bit of my reading time, and, sadly, most of my blogging time. Less politics, less FB, better concentration – should help, if I find the willpower 😉

Ola: Surfing. Achieving zen-like peacefulness in the middle of the week. Watercolor painting. I could go on and on, but that’s enough work for now 😀

END_OF_DOCUMENT_TOKEN_TO_BE_REPLACED

Tad Williams is a writer I’ve mentioned here a few times, and I reviewed his breakthrough trilogy, Memory, Sorrow, and Thorn. It got three posts altogether, so it’s clear I liked it. Having been published between 1988 and 1993, it’s one of the links between earlier post-tolkienian fantasy represented by authors like Brooks and modern, grimmer epics from Martin to Abercrombie. George R.R. claimed Williams had been an influence on The Song of Ice and Fire and it is quite possible, because despite Memory… predates Game of Thrones by eight years. So, the blurb you’ll see in a moment on the cover is not as annoying as many other of dozens upon dozens of GRRM’s stamps of approval.

It’s not the most sophisticated of fantasy series and lacks some of the shades of grey so important to books fashionable today, I admit, but it’s a well written story happening in a rich world. I particularly liked the important role given (closely based on Earthly examples) religion, something astonishingly rare in a genre where miracles actually do happen… and the elves, unusually alien and complicated. And the protagonist were likeable, and actually good people… does not happen that often now.

END_OF_DOCUMENT_TOKEN_TO_BE_REPLACED

I’ve reviewed the first two books not long ago and read the rest since then. To be honest, I do not have much to add. Most of all, I want to express my firm opinion, that the final book (in paperback edition divided into two parts) is just as good as previous ones and delivers a satisfying conclusion to the story. 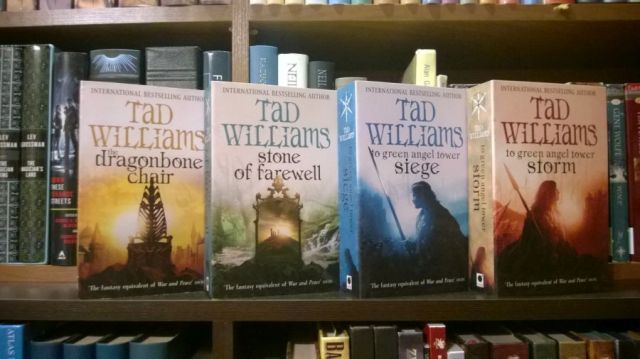 So it is a solid epic fantasy, building heavily on what came before, mainly Tolkien, without his depth, but still rich in the worldbuilding department. Characters rather simple, but not simplistic, likeable, and psychologically realistic enough. Brutal reality of war, the price non-combatants pay for ambitions of leaders… I’ve mentioned all that before.

I consider it one of the best post-Tolkienian farmboy-to-hero stories. Well thought-through by the author, aptly written, more mature than most of its contemporaries. I imagine it was rather innovative when published first, and it’s still a very pleasurable read. Williams is definitely better than Jordan or Brooks, more fashionable writers of comparable stature I’ve read lately.

END_OF_DOCUMENT_TOKEN_TO_BE_REPLACED

Memory, Sorrow and Thorn by Tad Williams. One of the solid series from the times when the Epigoni of Tolkien produced countless fantasy epics deprived of the depth of The Trilogy, but sometimes smart and fun. Sometimes catastrophically, mindbogglingly boring, like The Wheel of (too much) Time. Often though, more then a decent read for our troubling times. Grimdark I have on the news 😉

I’m halfway through, so it’s not a review of the entire series, but I’ve read enough to say a few thing and, lets be honest, I might like it, but it’s not going to surprise me too much.

END_OF_DOCUMENT_TOKEN_TO_BE_REPLACED 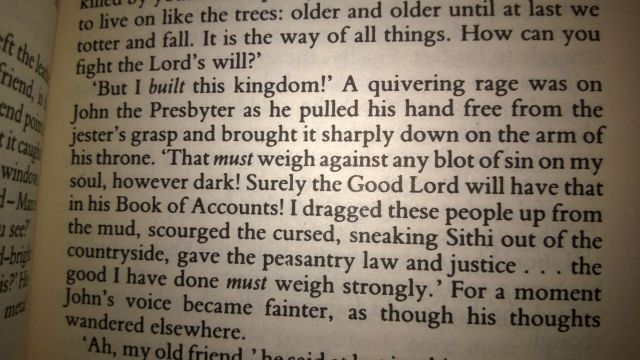 It seems to be a sentiment commonly held by history’s prominent rulers. Half the great churches, mosques and other temples were build to bribe gods, and great kings were convinced that common transgressions against morality will be forgiven in return for all they’ve done to further their deities earthly power.

Yes, I’m reading Memory, Sorrow and Thorne, series I’ve had on my shelves for six years. And I like it a lot, safely predictable, but great fun. Oldschool fantasy they don’t write any more. A caveat – I can’t guarantee I won’t change my mind, I’m only 50 pages in…