Buoyed by the success of our Deadly Bookish Sins tag we decided to even out the playfield – and created a corresponding Bookish Heavenly Virtues tag 😉 We had a lot of fun writing the questions and answering them, and now we hope you’ll enjoy reading them – and, if you do, we invite you to participate in the tag as well :).

CHASTITY: Which author/book/series you wish you had never read?

Ola: Aaand we start with a bang 😉 The two that most easily come to mind are Patrick Rothfuss’ The Name of the Wind (DNFed around the junkie dragon mark and I only wish I threw it down sooner) and Justin Cronin trilogy (DNFed within first 100 pages of the third installment – what a waste of time). I’m usually pretty lenient when it comes to books, as they are in fact someone’s years of hard work and dreams. But I absolutely abhor waste of time on things I dislike, as the theory of alternative costs plays in my mind different scenarios of what I could have done with that precious resource, and the two examples above represent exactly that.

Piotrek: It’s a hard one. I usually only go for books I can be sure to enjoy at least a bit, and some of the really terrible ones I revenge-reviewed, so it was not a waste of time, was it?

One case where I could have saved the time and read something else, even at a cost of not having a vitriolic review to write, was the Iron Druid Chronicles. Details – in the linked review 😉 but I have to say, the more time passes, the more I’m convinced it’s a case of urban fantasy tropes tortured inhumanely for no good reason.

END_OF_DOCUMENT_TOKEN_TO_BE_REPLACED

Thy story is a marvelous one! If it were graven with needles on the corners of the eye, it would serve as a warning to those that can profit by example.

A Cold War era spy thriller/horror/love story, centered around the life of the infamous Soviet spy Kim Philby, where French, American, British and Soviet secret services are viciously fighting for access to a supernatural power – djinn, or nephilim, or fallen angles, residing in remote wildness of Arabian deserts. And the famous Mount Ararat. So, in short, if you want to know why USSR fell in 1991, read Declare ;).

Tim Powers did it again. He found a nexus of happenstance, coincidence, inexplicable historical facts, and, diligently digging around through archives and his own subconscious, created an improbable, but inherently logical explanation to it all. One that involves Thousand Nights and One Night, T.E Lawrence, British Secret Service, Mount Ararat and Dead Sea scrolls, as well as baptism in Jordan River, a disgraced nun, an inhabited fox, the vagaries of Heaviside Layer and a colony of djinn.

END_OF_DOCUMENT_TOKEN_TO_BE_REPLACED 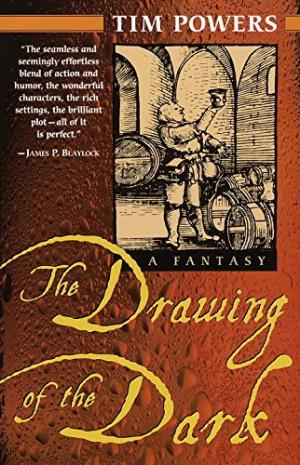 One of the first of Tim Powers’ books, it bears all the marks of what later became his unique style. It will come as no surprise then that The Drawing of the Dark is a crazy, fast-paced story full of magic, inexplicable occurrences and concurrences, tackling themes as disparate as metaphysical rebirth, production of beer, detailed instructions of what to do with a dead hunchback, a band of Vikings marooned on Donau canals, and a close loving look at mythology – this time strictly Western European.

The Drawing of the Dark is set in the year 1529, mostly in Vienna, at the height of Turkish invasion. The dominant part of the plot centers around a Vienna-based Zimmerman Inn, a former Christian cloister built on a Roman fort’s ruins, raised on even older Celtic brewery ruins, now a well known pub and hotel  producing its own, highly valued beer. The owner of the Inn, a very old, black-clad man calling himself Aurelianus, hires in Venice a battered, middle-aged Irishman, a veteran of many battlefields, a grizzled drunkard named Brian Duffy. Another BD, you may notice, if you’ve read The Anubis Gates ;). Duffy’s journey south is fraught with bizarre events and near-death experiences, from the materializing of a Bacchus tavern somewhere on the streets of Trieste, through the assistance of mythical creatures on Duffy’s passage through the Alps, to a sudden attack of winged monsters on the shores of an Alpine lake. If I am allowed to say one thing about Powers’ undeniable love of Alps, I’d say it’s pretty damn impressive. The description of the mountain views is powerful and poignant – it seems that Powers really has a streak of Romanticism hidden somewhere deep inside.

END_OF_DOCUMENT_TOKEN_TO_BE_REPLACED

The last book from my Summer Reads list, winner of the World Fantasy Award, nominated for Hugo, Nebula and Locus for 1982. I actually had it all summer, and started reading it, bit by bit, sometime in September. But it’s a huge book, 538 pages in really small print, and I managed to finish it only recently (a couple of weeks ago, to be precise). In some respects it reminded me, albeit only vaguely, of Tim Powers. There is that similar sense of uncanny in the real world, hidden in plain sight, not mentioned or noticed simply because most people don’t have the necessary apparatus (both physical and mental) to find it out. However, in more respects Little, Big reminded me of Susanna Clarke and her brick of a book, Jonathan Strange & Mr. Norrell. Crowley’s work is similarly meandering and slow, and pacing itself with infinite patience (which I, regrettably, don’t possess :P). But it’s also somehow… accruing, contrary to Clarke’s novel, where things just happen in a given order; accruing not as much in the area of action (there’s almost none), but more in the sphere of sense. It actually builds itself up from the foundations set in the beginning – explaining the inexplicable, casting light on the shadows that seemed impenetrable – which, slowly and incrementally, makes the final result all the more appealing.

As you can see, that long and meandering style is contagious. I will try to keep my sentences short from now on, but I can’t vouch for the success of this endeavor :).

END_OF_DOCUMENT_TOKEN_TO_BE_REPLACED

January is a somewhat tough month for me – preparing exams, checking them, the paperwork related… It takes a lot of time and, in consequence, much less is left for reading. And so it took me a while to finish Perdido Street Station – not because it was boring, but because I didn’t have time to read it. But here I am, the book finished, exams waiting to be checked, and a review due today ;).

Perdido Street Station is Miéville’s second novel, first set in the Bas-Lag world, and a mammoth of a book (880 pages). It’s urban fantasy/steam punk/alternative reality something born from a really wickedly bright, and/or stoned, mind. It won several awards, Arthur C. Clarke Award for 2001 being the most prominent. It is the perfect example of New Weird. New – to some extent, but Weird – all the way.

END_OF_DOCUMENT_TOKEN_TO_BE_REPLACED

A novel about time-travel set in Regency London, with mad Egyptian sorcerers, hordes of murderous beggars, an evil clown, a dwarf, clones, the Mameluke, fiery ifrits, body-changing werewolf, a young woman posing as a man, Romantic poets and a band of Gypsies. Sounds good? It definitely should :).

The Anubis Gates has plots within plots within plots. It starts innocuously enough, in contemporary England, with a discovery made by an extremely reach eccentric J. Cochran Darrow. Darrow, terminally ill, desperately looks for a way to cure himself. Instead, he (or rather a team of scientists employed by him) discovers gates in time. There is a finite number of them, leading to a finite number of points in the past and future, and they are ruled by a set of immutable, physical rules. Nonetheless, they make time-travel possible. What the famous tycoon does with this breathtaking discovery?

He invites rich people for a trip to a live Coleridge lecture, which the poet delivered in 1810.

END_OF_DOCUMENT_TOKEN_TO_BE_REPLACED

Yes, it’s Wednesday and I’m back from vacation 🙂 Time for a review!

Tim Powers doesn’t write much, and even though he started writing a long time ago, back in seventies, the list of his novels is rather short. His most known novel is Anubis Gates. Have you heard of it? I haven’t, till a few months back ;). Powers is not a very well known writer, but after reading The Stress of Her Regard I believe that this is a problem that should be remedied as soon as possible.

Why? Because The Stress of Her Regard is an exceptional book. Intriguing, fascinating, visceral (literally!), terrible and amazing, and written with remarkable precision. The real and the fantastic are joined together seamlessly, which is all the more astonishing because Powers bases his books on real past events. He focuses on a certain point in time, on certain real, famous characters and the real events that they have taken part in, and around those historical facts he builds a fantastical story. In short, he artfully supplies us with a supernatural cause of historical processes and occurrences. In The Stress of Her Regard the real background are political events in Europe in the early XIX century – and in that setting we become witnesses to the lives of English romantic poets: Shelley, Byron and Keats. According to Powers, all their obnoxiousness, weirdness and irrationality should be ascribed to the fact that all of them were victims of another sentient race on Earth – the nephilim, a vampiric form of life based on silicon instead of carbon. Our guide in this subtly altered, subverted world is Michel Crawford – a Navy doctor, obstetrician and a fellow nephilim victim. We see the world through his eyes, and we witness up close all the temptations, rewards and costs of vampiric addiction.