Naomi Novik’s books have been reviewed here before – her Temeraire series was given a thorough once-over and emerged quite victorious 😉 I think Napoleon and dragons were the main lure for Piotrek ;). But the novel that woke real interest in her, at least in Poland, was Uprooted, a classical fantasy tale with witches and wizards, and with openly advertised Polish roots. Fragments of it had been even read on the national radio this summer, which is a rare occurrence enough, especially for fantasy books.

Novik spun her tale from the many Polish fairy tales she had heard as a child – she is of Polish descent and although her first language is English, she was careful to keep the Polish names of people and things into her story (paying more attention to how they should sound than look, which I imagine made the pronunciation much easier for English-speaking readers!  ;))

It a classic story of a hero(ine) of modest background but an enormous talent, discovered by a reluctant, close-mouthed and seemingly distant mentor who, although he had been doing pretty well on his own for over a century, now finds himself in a desperate need of her help. Well, it’s not even his fault, as she is simply destined to great things and he happened to be on her way. A debilitating curse of a Special Snowflake Syndrome. Do I seem sarcastic? Just a tiny bit, I assure you.

END_OF_DOCUMENT_TOKEN_TO_BE_REPLACED

“Patrick O’Brian with dragons, and it works like a charm”, Chicago Tribune apparently wrote about Novik’s Temeraire series. That’s certainly the plan. Sometimes it comes close. Sometimes – not really. Ladies and gentlemen – I give you In His Majesty’s Service, collected edition of books 1,2 & 3 of the famous “Hornblower on a dragon” series. Books based on idea so awesome, Peter Jackson wanted to film it. 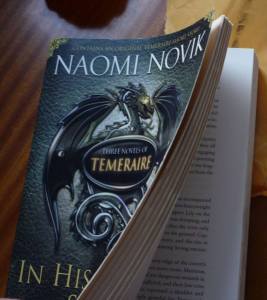 I’ve read the omnibus, but I’ll score each book individually, I judge them very differently.