Brent Weeks seems to have as many die-hard fans as critics; and the number of both is not insignificant. His bestselling Lightbringer series, of which The Black Prism is the first instalment, consists of five books. And what books these are! Each is over 600 pages long, and the last reaches nearly a 1000 pages 😉. In other words, a huge time investment for busy bookworms such as us. Is it worth reading? Or at least starting?

The short answer is yes, but it is not an unequivocal yes. It’s not a game-changing literature, or a piece of art that will forever alter your understanding of reality. It’s not without its faults. And yet, The Black Prism is a well-written book, with a creative, complex magic system, a rich set of believable (well, mostly 😉) characters, and some highly enjoyable plotting. There’s lot of action, and plenty of blood and gore and cruelty, steeped in a thick sauce of political intrigue, treachery, side switching, heroic efforts, and spiced with variedly successful attempts at humour – generally, all what you have come to expect from epic fantasy.

So, what is it about? In a land ravaged by a civil war, in which brothers fought against each other with sorcery and sword, a tenuous peace is threatened once again by discontent, ambitious princes. In the world of Lightbringer the power comes with magic. And magic comes in many different colours. Literally; magic is dependent on the perceived light spectrum, and magic users are divided into groups based on their colour affinity: which hue can they harness to create luxin, a versatile substance exhibiting different properties depending on its base colour. There are as many types of luxin, and its creators, as there are colours in the rainbow – plus both ends of the spectrum, ultraviolet and sub-red. As magic is an indispensable element of the world of Chromeria, magic users are widely sought after and respected, increasingly so when they can use more than one colour; and a person able to wield all seven hues is called Prism.

END_OF_DOCUMENT_TOKEN_TO_BE_REPLACED

This turned out to be one of the more difficult reviews to write for me. Everybody and their uncle seems awed by Kuang’s debut novel, which reimagined the history of 20th century China into a vengeful fantasy of violence. The Poppy War was one of the rare books bound to become a bestseller, with publishers outbidding each other for the rights to the book. The enthusiasm was not without merit: for the reader from Western sphere of influence, Kuang’s novel presents an undeniably attractive image of China, fueled in equal measures by the elements of Chinese mythos already popularized in Western pop-culture and by the impression of mystery surrounding China as a fabled, distant land. The mythos, and stereotypes, are fairly easy to enumerate: martial arts’ prowess, Chinese zodiac and a large pantheon of demigods and demons, feng shui rooted in a belief of holistic spirituality, snippets of a heroic age long gone, when emperors ruled and Great Wall and Silk Road were built, and a vague concept of a collective social outlook, linked to Confucius. Add to it Sun Tzu’s Art of War, Ang Lee’s Crouching Tiger, Hidden Dragon, DreamWorks’ Kung Fu Panda series and Disney’s Mulan, and maybe some bits and pieces of more contemporary information regarding Chinese communism coupled with the evidence of the irrefutable economic success, and the vision of China in popular culture is more or less complete.

END_OF_DOCUMENT_TOKEN_TO_BE_REPLACED

If Quentin Tarantino and Guillermo del Toro ever had a child who was an empath with deep, abiding love for Africa and penchant for intimate, graphic violence, his name might have been Marlon James. Black Leopard, Red Wolf elicits quite extreme reactions from readers – from hate to confusion to appreciation to love – and after reading it I no longer find this surprising. It is indeed a visceral, shockingly brutal and sometimes outright nightmarish journey through atrocities and evils, real and imagined. When James writes that there are two pages in this book that his mother is not allowed to read, I feel I know exactly which two pages he talks about; and they are horrifying in the portrayal of the most intimate, vengeful violence. And yet Black Leopard, Red Wolf is also a book describing with heartbreaking detail the fleeting, protean essence of happiness; the capriciousness of fate and coincidence; the twisted, uncanny ways of human heart. At 620 pages of dense, challenging prose Black Leopard, Red Wolf is James’s absolutely stunning tour de force; a classic Bildungsroman set in the mythical neverwhen of pre-colonial Africa, where monsters prowl the land and sometimes hide behind human eyes, where humans take on animal forms, where magic is ordinary, and miracles are everyday occurrences, but where human kindness is rarer than gold.

END_OF_DOCUMENT_TOKEN_TO_BE_REPLACED

First a blog-related question – how do you like the new layout? I am, I have to admit, on a fence, but it is refreshing 🙂 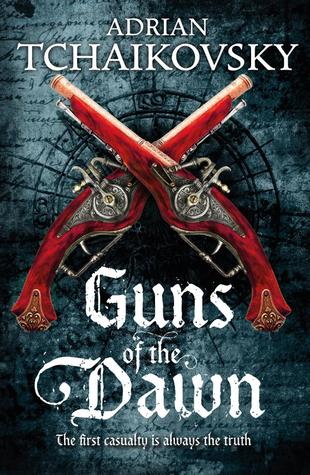 Title: Guns of the Dawn

A book bought by me immediately after it was published, read and reviewed by Ola, and now I also finally got around to reading it. Ola’s original post is in Polish, as was often the case in our early days, so I’ll recapitulate, and maybe one day she will translate the whole thing.

Ola liked it, with 9/10 I’ll say she loved it. Sense and Sensibility in Vietnam was her title, and what followed were comparisons to Platoon, Full Metal Jacket and Apocalypse Now. And Shadows of the Apt, obviously 😉 Conclusion is, that the book is as well written as Czajkowski’s other novels, and keeps the reader interested up to the very last page.

In general, I agree, but I’m not as enthusiastic as Ola had been.

I agree, we do have a likeable heroine, Emily Marshwick, a copy of Austen’s protagonists, a daughter of impoverished nobility trying to stay afloat in a dilapidated family manor in a society that reached early industrial age – while preserving magic and strong monarchy. She’s pragmatic, self-reliant, smart, prideful and quite a bit prejudiced. It was light, not as fresh as Austen’s prose 200 years ago, but very entertaining.

END_OF_DOCUMENT_TOKEN_TO_BE_REPLACED

Piotrek: When I first heard the news in 2017 I was excited. Ola proclaimed:

Now we’ve both seen the first season, meditated on it for a while, and it’s time for our verdict 😉 We both like the books, a lot, so it’s not going to be a cool review of a random genre TV show. I definitely will be measuring it against my high expectations and a clear vision of who Geralt is and what world he has his adventures in. And against one of the best computer RPGs ever.

And boy, am I conflicted… It’s good they did it, there are many great things about the show, including most of the actors, but the story is butchered in a way that simply does not work for me. That is not to say I won’t be watching next season, there’s not that much solid fantasy on tv.

The problem starts with the first important decision Lauren Schmidt Hissrich had to make, about the show’s structure. Books start with many stories, two volumes of them, concentrating on Geralt and his adventures, often shared with Jaskier/Dandelion. It’s episodic, although some wheels are put in motion that will determine events volumes ahead. Yennefer appears, but is not yet one of the protagonists. Ciri is too young to really matter. The show, by starting the story with three separate timelines, gives us two heroines that are just as important as the hero, and gives us insight into their origins that we only glimpsed at reading the saga. The idea is good, execution flawed. Before I discuss the flaws, let me tell you what I think we missed, and I would miss it even if Hissrich’s idea was executed seamlessly.

Sapkowski’s short stories, stories I value more than the novels, introduced his world in a pretty comprehensive way. Culture, history, religion, politics, prejudices, brewing conflicts that will later erupt into wars. Nilfgaard is mentioned, but not visited, and we get to see the shades of moral grey of this universe before we’re told to hate the big bad. Sapkowski created a post modern cycle, where the bigotry of our own world was the main target. Here we got a cliche about the coming Nazis. I’d argue it’s because there was no time to get to know “our” side. One of the victims of that simplification is Cahir, reduced to a stereotypical Hitlerjugend officer. Whatever you think about the later seasons of the GoT, it’s early episodes showed how to present a complex fantasy world on screen with depth that is simply missing here. Ola? 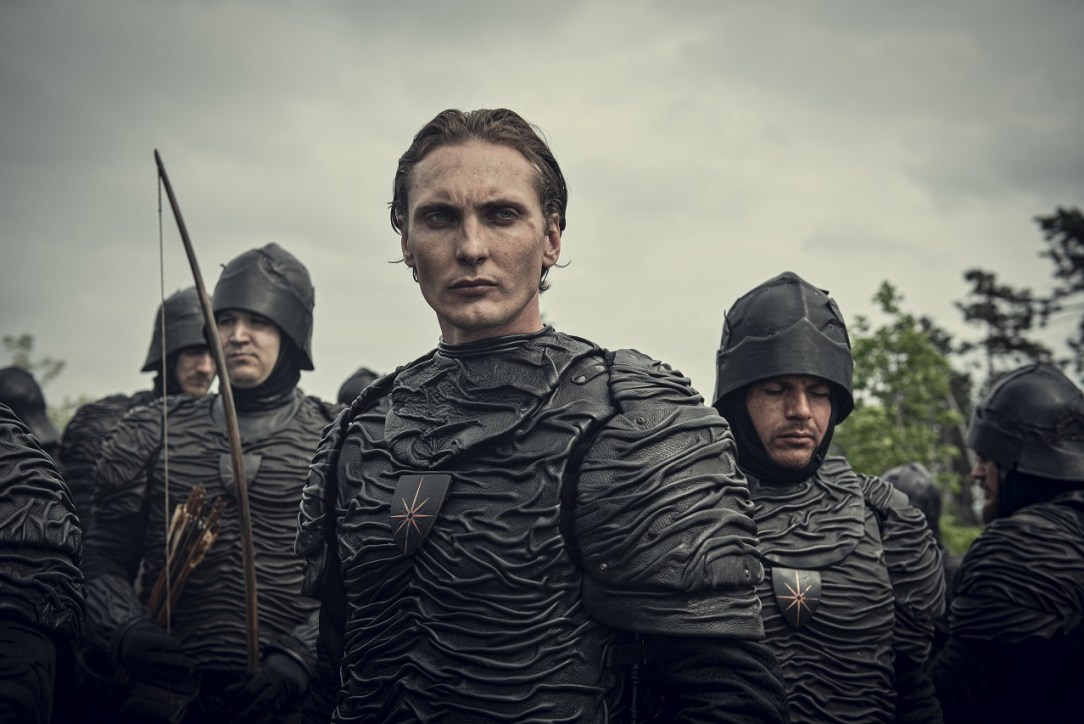 Ola: That’s one mighty rant ;). And an unfortunately justified one, I might add.