We discussed books highlights of 2019, now it’s time for movies and TV-series. A few of the favourites and a few of the disappointments in both categories, to round up the past year in media :).

I haven’t had much time for movies and series. I’ve watched a nice mix of old and new, and enjoyed quite many of them – though only few made a lasting impression. The absolute winner in this category is…

END_OF_DOCUMENT_TOKEN_TO_BE_REPLACED

Our first foray into the worlds of our childhoods ended with a sad conclusion that some things age badly. Today, we present you with an animated series from quarter a century ago that still delights our cynical older selves.

Also, our second DC post in a row, what’s going on??

Batman: The Animated Series originally aired from 1992 to 1995 and consisted of 85 episodes, unevenly distributed between Season One (65) and Season Two (20). This frequently awarded series is still considered one of the greatest superhero animations, and started many further animated DC Series, way before MCU.

Piotrek: In the world of animations, I had to wait till recent Spiderman to see a Marvel piece to rival this one. And it is, so far, one feature film, whereas Batman: TAS was consistently brilliant for 85 episodes!

Ola: And let’s not forget that it also paved way for some really good animated Batman movies targeted for a more mature audience – a rather rare situation in American animation industry, usually focused on kids. I can heartily recommend Batman vs. Robin from that batch, based on Snyder’s Batman: the Court of Owls storyline.

END_OF_DOCUMENT_TOKEN_TO_BE_REPLACED 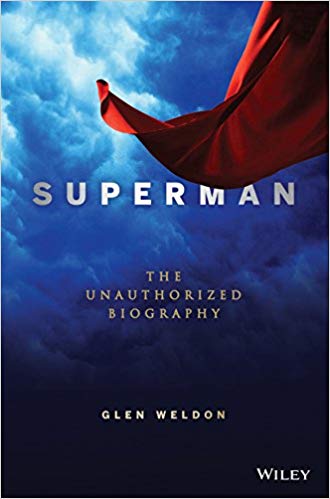 There’s one main reason for my recent incommunicado, and it’s life. Unpredictability of life has been discussed extensively elsewhere, so I’ll refrain from wallowing in self-pity and/or bragging and instead take care of the topic of this post :).

Superman. The Unauthorised Biography by Glen Weldon is a hefty book, worthy of the enviable long life of one of the most famous comic book characters (he’ll be 81 this year!). I freely admit, I have never been a rabid fan of Superman, nor even a dedicated one. Superman just seemed too super, too powerful and too idealized to engender any warmer feelings in me – especially in comparison to the morally ambiguous, brooding character of Batman.

But Weldon’s book, impressive in its thoroughness, fanboyish love and respect for the source material, actually got me to appreciate Supe’s character and – especially – his cultural significance, predominantly for the American society.

END_OF_DOCUMENT_TOKEN_TO_BE_REPLACED

Where do I start? Maybe with the hype concerning Tom King as the new Wunderkid of DC Comics, one of the few authors who allegedly could take the post-Rebirth Batman and put some life into the character nearing its permanent retirement age (80 years next May!). Tom King’s approach was supposed to be ‘cerebral’, his stories realistic and full of suspense. Maybe some of them are – I am not to judge, since I’ve read only the one and I don’t intend reading any other. Because, in short, The War of Jokes and Riddles was a smelly pile of horseshit.

Let’s start with the art, because later on it will be one long rant. Art is mediocre at best, with Riddler inexplicably beefed up and Joker looking like a drawing of himself from some really bad old comics. Batman and Selina look correct if quite generic, and that’s probably the best I can say about them. The main problem I have with Janín‘s art is that it lacks dynamics, and the eyes of the characters seem dead. They make faces, all right, but nothing reaches their eyes. The panels depicting the war don’t really make much impact – they are there, and they show what happened. Maybe I’m spoiled by other artists, I tend to choose my comics carefully knowing there’s a lot of fluff and a lot of trash out there.

END_OF_DOCUMENT_TOKEN_TO_BE_REPLACED

Thank gods for libraries! Because if I’d bought this, driven by nostalgia, authors’ fame, or some misplaced need for adventure, or a revisit of the universe before HBO’s TV series scheduled for next year, I’d have been furious. All right, I knew the Watchmen prequels were a shameless money grab, there was no doubt about it. But I also hoped for some kind of tribute, a homage, or a thoughtful reimagining of the ideas and social commentary presented by Moore and Gibbons in the story and characters from Watchmen.

Need I say more? I probably ought to 😉 So, first things first, Moore’s and Gibbons’ Watchmen are on my list of favorite graphic novels of all time. Gritty, subversive, digging deep into the American superhero mythos and collective identity, Watchmen became at once the grist and the mill of the pop culture, simultaneously giving it lasting imagery and the tools to analyze it. We should probably do a Two-shot post on Watchmen here at Re-Enchantment, but because our views on the work of Moore and Gibbons are very similar, there wouldn’t be much suspense or tension. We might only have some differences of opinion regarding certain characters and plot devices (the fated pirate story, ekhm…), but our overall reviews would be quite alike.

I have been circling around Before Watchmen for a while now, at first dismissing this idea as a blatant and ill-conceived effort to capitalize on Moore and Gibbons’ work – and DC’s already done more than enough bad things in this regard. However, when I saw the Comedian/Rorschach book in my local library, I decided to finally give it a chance and overcome my prejudice – after all, I thought, Azzarello of 100 Bullets and Batman fame wouldn’t butcher Moore’s ideas.

I couldn’t have been more wrong.

END_OF_DOCUMENT_TOKEN_TO_BE_REPLACED

I had a long break from blogging, because, you know, life 🙂 But now I’m finally back and I can happily present to you my first Batman drawing, a result of a recent in-house geeky challenge with certain strict rules: pencils as a chosen drawing technique and Batman portrayed up front 😉 So here we go!

There’s been a lot of talk about Wonder Woman, very favorable reviews (one of them, by Piotrek, on this blog), fan hype and critical acclaim. The movie’s heyday is already past, with Justice League on screen and other superhero movies crowding the benches. So why do I come back to it now?

Well, probably partly because I’ve been recently reading Moses Finley’s seminal work, The World of Odysseus – very highly recommended to anyone interested in ancient Greece. And partly because the movie sits like a thorn in my side, its popularity and acclaim, when confronted with its painfully stereotypical message, truly baffling.

Wonder Woman has been hailed as the first superhero movie with a woman as a lead. This is surely something laudable? After all, thanks to this movie we’ve read about subversive feminism and whatnots, discussed chainmail bikinis as a source of empowerment or subjugation, depending on one’s stance, and so on. Even Gloria Steinem took a stand, saying the film was very good, although noting at the same time that she “may be desperate – […] just happy that the Amazons had wild hair”. It’s been called the best of DCU movies so far, and while it in itself is not a big feat, it definitely forces comparison to other movies. It all seems highly beneficial to a summer flick which on its own is rather mediocre. We’ve all probably heard the voice of reason, saying, “it’s not perfect, but better this than nothing”, “it’s a step in right direction”, “I’ve seen worse”.