As we’re nearing the release date of the second season of The Mandalorian, the highly acclaimed space western series and the only thing that valiantly stands between Star Wars and the abyss of total, disgraceful annihilation, we’ve decided it was high time to review the first season 😊.

The Mandalorian came to the TV screens as a surprise pet project of Jon Favreau, for a long time associated mostly with Marvel and their cinematic universe. Favreau and Dave Filoni, known best for his long-time work with Star Wars franchise (particularly the animated series SW: Clone Wars and SW: Rebels), worked long and hard on a new live-action series that would explore the SW universe immediately after the events of The Return of the Jedi.

Ola: Hmm, I wonder why is that? Is it possible they weren’t fans of the new Star Wars movies Disney so horribly botched? 😀

When you watch The Mandalorian, the answer to this question quickly becomes obvious. The new series pays direct homage to the very beginnings of the Star Wars franchise, revisiting old places and old themes in a way that remains respectful, very self-aware, and wonderfully nostalgic while simultaneously offering new perspectives, immensely better CGI and slicker storytelling – not to mention the exploration of the more mysterious elements of the lore, such as the Mandalorians, the nature of the Force, or even the species of Yoda. It’s clear that the series is a creation of devoted fans, a heartfelt tribute to a phenomenon that had significantly influenced not only the imaginations of many generations of movie goers but also the Western popular culture in general.

Piotrek: Yes, definitely, I won’t argue with you on that. The Mandalorian is my favourite recent addition to the Star Wars universe and one of the best SF shows I’ve seen recently. We both hated the new trilogy, even if I enjoyed its first instalment. This show was great in itself, and also developed the lore in interesting ways. Now they just need to remove most of the new feature films from the canon 😉

END_OF_DOCUMENT_TOKEN_TO_BE_REPLACED

In anticipation of the new season of The Mandalorian, the only thing that stands between Star Wars franchise and a demeaning, protracted death by thousand Reys, here’s my watercolor version of the eponymous character :D.

You can enlarge the image by clicking on it.

Expect the review of the first season soon!

Wow. I can’t believe I hadn’t written this review before. In fact, I was so certain that I had, that in the end I checked my blog and Goodreads… twice 😉. And indeed, I hadn’t. Well, better late than never, so here it is.

With book 4, Asher is faced with the ultimate threat to any self-respecting series – getting lost within the intricacies of his own plot and the ever-growing cast. And in Polity Agent he must indeed juggle many pieces and characters, all working independently or semi-independently from one another, all moving in separate directions, all motivated by different things. We have agent Cormac, undergoing changes he doesn’t understand and is not comfortable with; he is becoming (or fears becoming) more machine than a man, and while all the changes are apparently necessary as elements of the life-saving procedure in the aftermath of the Skellor’s attack that almost killed Cormac in Brass Man, he still resents being stripped of choice. We have our magnificent bastard, Mister Crane; what he’s up to is anyone’s guess, but it’s always a wonder to watch him reassemble himself through unending iterations. We have Mika, still deeply engaged in her Dragon research, but also increasingly engaged in a relationship with Cormac; and of course, we have the Dragon. As enigmatic as Mister Crane, the Dragon spheres and their aims remain a mystery.

We also have plenty of AIs, from the nearly omniscient Jerusalem to the rebellious King of Hearts to Jack Ketch who renamed himself to “Not Entirely Jack,” and to the bloodthirsty, adventurous war drone Arach; there’s more, and they all seem increasingly divided and not entirely benevolent. Just take a look at the Legate, an emissary of the Jain technology: imagine Lang’s Metropolis upgraded to Terminator 2 and hell-bent on the destruction of Polity.

We have also Orlandine, a haiman (a meld of human and AI) tempted by the poisoned fruit of Jain knowledge. And last but not least, there is Horace Blegg and his particularly dangerous secret; let’s not forget Sparkind Thorn and Scar, the dracoman. Shall I go on? I believe that by now you get the gist: Polity Agent boasts of a plethora of characters and places and motivations, and is definitely not a good place to start one’s adventure with Asher’s universe. Start with Gridlinked, and slowly make your way through Line of Polity and Brass Man before you attempt either Polity Agent or the fifth and final installment, The Line War.

END_OF_DOCUMENT_TOKEN_TO_BE_REPLACED

Were I in the habit of creating titles for my reviews, this one would be Smoke Bitter or The Too Long Goodbye with Mercy Thompson. At 12 books the series has long outlived its merit – at least for me. With the benefit of hindsight, it is now clear to me that Briggs’s flagship series should have ended with Fire Touched, book #9, or even Night Broken, book #8. To be honest, the last one I really enjoyed was number 7, Frost Burned, and afterwards the series became a slippery slope of ever less imaginative plots and lamer jokes. And more fawning over oh-so-beautiful Adam. Well, whatever else I can say about Smoke Bitten, it had these three elements in spades.

If you know Mercy Thompson series, you know it’s an urban fantasy set in the more rural part of Washington (the state), and the main protagonist is a young woman with complicated parentage – her father is the Coyote, Native American spirit of mischievousness (which by book 12 has been elevated to “chaos”) and she’d been raised by a werewolf pack in a remote part of Montana. But even if you don’t know anything about it, you can easily pick up book #12 and start reading, because about a half of the novel is a detailed rehash of what had happened before. I realize that authors of long series are always faced with the dilemma of keeping their books streamlined and focused on the new plot lines while keeping the readers in the loop. I’ve seen many solutions to the problem, all slightly imperfect – from not making it easy and believing that by book N-th the readers are already invested enough to know what’s going on, to a short synopsis at the beginning, to a list of characters with descriptions, to info-dumping at every opportunity.

END_OF_DOCUMENT_TOKEN_TO_BE_REPLACED 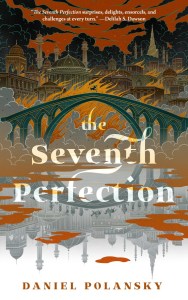 Daniel Polansky is known mostly for his Low Town grimdark trilogy. I read, and admired, his 2015 novella The Builders; a gritty and incredibly bloody tale of a group of small animals hell-bent on revenge. Think The Wind in the Willows x Reservoir Dogs (yes, I know. And yes, it works!) In The Builders I found that Polansky has a perfect feel of the limitations and opportunities inherent in shorter literary forms – though, frankly, almost 200 pages used to be a full novel, not a novella 😉. Suffice to say that when I saw The Seventh Perfection available on NetGalley, I jumped on it headfirst (or maybe teethfirst?).

And that’s the best way to approach this novella, in my opinion: don’t read blurbs, avoid spoilery reviews (yes, it’s self-defeating, but this one doesn’t contain spoilers, so it doesn’t count! :D) and be prepared to be surprised. But also, be prepared to shoulder at least some of the burden of understanding what in the world is going on – because Polansky surely and gleefully doesn’t make it easy for his readers. The Seventh Perfection is a reading challenge. A very welcome, and an extremely rewarding one, I might add. It’s written exclusively in the second person perspective, and each chapter presents a new point of view (there are very few recurring characters) – which might be overwhelming, but is also immensely enjoyable: all characters have their own peculiarities and their own unique voices, and, most importantly, their own agendas.