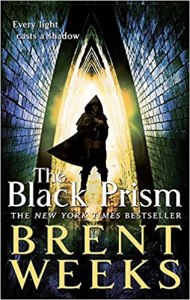 Brent Weeks seems to have as many die-hard fans as critics; and the number of both is not insignificant. His bestselling Lightbringer series, of which The Black Prism is the first instalment, consists of five books. And what books these are! Each is over 600 pages long, and the last reaches nearly a 1000 pages 😉. In other words, a huge time investment for busy bookworms such as us. Is it worth reading? Or at least starting?

The short answer is yes, but it is not an unequivocal yes. It’s not a game-changing literature, or a piece of art that will forever alter your understanding of reality. It’s not without its faults. And yet, The Black Prism is a well-written book, with a creative, complex magic system, a rich set of believable (well, mostly 😉) characters, and some highly enjoyable plotting. There’s lot of action, and plenty of blood and gore and cruelty, steeped in a thick sauce of political intrigue, treachery, side switching, heroic efforts, and spiced with variedly successful attempts at humour – generally, all what you have come to expect from epic fantasy.

So, what is it about? In a land ravaged by a civil war, in which brothers fought against each other with sorcery and sword, a tenuous peace is threatened once again by discontent, ambitious princes. In the world of Lightbringer the power comes with magic. And magic comes in many different colours. Literally; magic is dependent on the perceived light spectrum, and magic users are divided into groups based on their colour affinity: which hue can they harness to create luxin, a versatile substance exhibiting different properties depending on its base colour. There are as many types of luxin, and its creators, as there are colours in the rainbow – plus both ends of the spectrum, ultraviolet and sub-red. As magic is an indispensable element of the world of Chromeria, magic users are widely sought after and respected, increasingly so when they can use more than one colour; and a person able to wield all seven hues is called Prism.

As the most valuable and dangerous weapon/religious symbol in the world, the Prism (there should be always only one, and their powers have a neat expiry date, so that there aren’t many possibilities of Prism Wars – or are there? 😉) usually sit tight in their tower and use their powers only sparingly, in accordance with the decisions of a bureaucratic political body representing all satrapies (“The Spectrum,” consisting, again very neatly, of seven “Colours,” one for each province) and the White – the official governing The Spectrum. Lost yet? Don’t worry, it gets wonderfully more muddled from there! Moreover, this all is actually quite pertinent to the plot…

…which I’m not going to summarize here; suffice to say that once again the world is in danger, and heroes and villains of different hues will once again try to save or destroy it. Or maybe, just maybe, change it a teeny-tiny bit upon discovering that not all old stories are true – and not all of them are false.

The big cast of characters is at times a huge draw, and at times an annoying contrivance. I’d say that for a first book in a series there might be too many of them, both for the readers and for the author. And by this I mean that while Weeks tried very hard to differentiate his protagonists, not all of them came out equally fully fleshed or believable. I guess for those who read The Black Prism it won’t be much of a surprise if I say that the most annoying and weirdly unconvincing of the bunch was the one who’ll supposedly play a much bigger role in the subsequent instalments – Kip. I’m sorry, but either Weeks was an extremely awkward teenager with absolutely no preservation instinct, or he forgot most of what he ever knew about being a teenager in the first place. Kip, at least in The Black Prism, is a two-dimensional character whose outline has been vigorously shaded to imitate 3D. His social skills are on the level of a five-year-old; his brick-a-brac of knowledge buttressed by astounding feats of deduction far surpasses the limits of what a teenager from a forgotten village could have ever learned, even with a genius of a military general for a mentor. Kip is a mosaic that doesn’t hold up well to scrutiny; and yet, his adventures are if not outright gripping, then at least entertaining.

My favourite character in The Black Prism is by far Gavin Guile. Burdened with many secrets from the time of war, haunted by a seriously problematic family, plagued equally by political unrest on the fringes of his domain and by unreasonable expectations of his faithful subjects, and yet maintaining a sunny, guileless (yeah, I know) façade for the sake of peace in the realm, he is more than meets the eye. But the vaunted Prism Guile, totally, enthusiastically overpowered at the beginning of the novel, actually manages to grow during the events of The Black Prism, becoming a much more nuanced, and convincing, character.

Karris is not bad either, though with Karris we fast approach another Lightbringer problem: a weird (and I mean it!) fixation of the author on female bodily functions. I really don’t know what Weeks tried to achieve by writing extensively about menstruation issues; if he wanted to raise awareness of it among his readers, more power to him, though I’d say he chose a rather strange venue for that. But as much as I’d love to believe this was his motivation, I did not notice any similar effort with regards to men, be it prostate problems, balding, difficulties with erection, inability to talk about feelings or whatever other biological male stereotype comes to mind. No. Only the female reproductive system was scrutinized and fixated upon. And yes, over 600 pages is a lot of space, and I’m sure it could be used for many purposes, but this particular fixation was completely off kilter with regards to the novel’s plot.

As for the plot itself, it could have been more logical; too many happy – or unhappy – coincidences played an excessive role in the shaping of the novel’s events, getting the sprawling book toward the author’s end goal with enviable speed, but also a lot of head scratching (at least in my case). Despite this, it is deeply immersive; the pace of the book is punishing, as the realm-changing events happen one after another within just few months (though it feels like days; I had to check the timeline online to make sure it was longer than a few weeks 😉).

I’ll be frank; The Black Prism was the first book of 2020 for me, but it took me quite a while to make my mind about it. And, to write that review, it also took Dave’s urging. As much as I appreciated the worldbuilding and the intricacies of the spectrum-based magic system, which after first misgivings actually grew on me, I can’t overlook the heaviness of Weeks’s style, or at the deficiencies of the plot, at times plodding, at times illogical. After finishing The Black Prism I simply needed a break from Chromeria and its inhabitants. That said, however, I enjoyed the first instalment in Weeks’s Lightbringer series; and I’ll definitely read the next book, The Blinding Knife.