The final installment in the final (at least for now) trilogy in McClellan’s flintlock fantasy series set in the Powder Mage universe, Blood of Empire had to face a slew of high expectations – and I’m happy to say the book meets quite a few of them. After setting the stakes in Sins of Empire, ramping up the pressure in Wrath of Empire, Blood of Empire takes some of the action to another continent entirely, into the heart of the Dynize, while at the same time providing a satisfying array of battles and revolutions in Fatrasta. In short, Blood of Empire offers a fast-paced, high-stakes entertainment and provides an enjoyable conclusion to the Gods of Blood and Powder trilogy.

The source of McClellan’s success in the second Powder Mage trilogy lies in my opinion in the creation of a well-composed set of varied, likeable and believable characters. There’s nobody as charismatic and intriguing as Tamas, and let’s be honest – if I were to read a whole book about Taniel, I’d sooner throw it out (shooting myself is out of the question, I have honed my preservation skills to perfection :P). That said, the team of Mad Ben Styke, spy-turned-revolutionary Michael Brevis, and – surprise, surprise – angry wallflower-turned-able general Vlora Flint tries their best to even the field, and they actually come close. It doesn’t hurt that they have a superb supporting cast, with Olem, Ichtracia, Celine, Yaret, Orz and Etepali.

McClellan must have realized that Vlora’s development in previous installments left something to be desired, because this time he actually devoted a lot of space and time and effort to her story, making her character if not outright likeable, then at least believable and well-balanced. Her trauma, anger and desperation, the ugly parts of her that she tries – and sometimes fails – to suppress, her pain and the heavy burden of responsibility toward her compatriots and her army – all of these made her surprisingly my favorite character in this installment. Vlora’s growth is all the more striking for the fact that here she finally grows up to be herself – no longer in the shadow of her father or brothers, she becomes her own person. It’s not a painless process, and not without sacrifices, but hers is the most rewarding story arc in Blood of Empire.

Michel Brevis also did some growing up in this installment, and it was nice to finally see him appreciate and learn to accept all the aspects of his shadowy work, and not only beating himself to death with his guilty conscience. His choices, though seemingly small, had surprisingly far-reaching repercussions, and his story arc was ultimately the most twisted and unexpected, pushing him into some very exposed, dangerous places. And once again, his presence allowed for some cool urban guerrilla scenes and revolutionary fights in all their bloody infamy, so hats off to Michel and his Landfall crowd! 😉 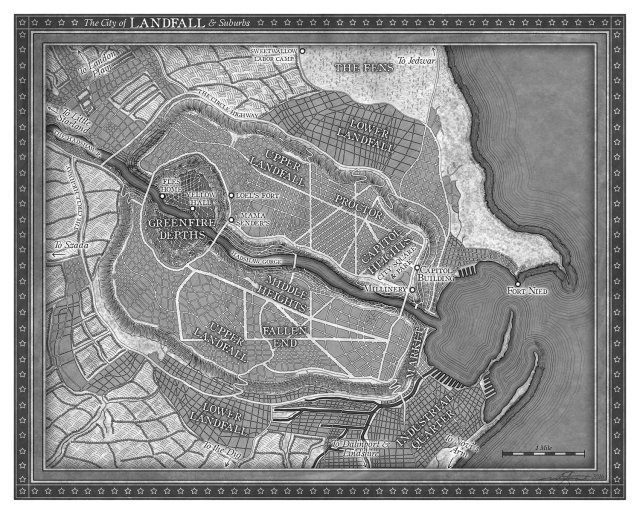 Ben Styke remained very much himself, and while he was also shown as reluctantly maturing and accepting some of his responsibilities, his development arc was more of a sketch: all bold lines, monochrome, and not much shading. While his story had a lot of potential, playing out in a completely new environment, I didn’t feel it managed to reach it. Dynize is shown in patches, the slavery-based society not much different from the democratic Fatrastan one, and in some aspects – at least from Styke’s point of view – actually better, as slaves are seemingly quite happy with their fate. I feel there was a promise of an interesting historical/political discussion there, alas – not realized. We’re left only with a very superficial image of “not all Dynize are bad.” Bad apples are everywhere, granted, but not everywhere they get to organize a major invasion and thousands of blood sacrifices with the blessing and support of the majority of the population.

Styke had a lot on his plate in this installment, and while I’ll always enjoy reading about Ben’s antics, and his peculiar worldview, his role as an accessory for Pole unfortunately diminished his appeal a bit. I don’t think that by now it comes as a surprise to anyone – but I’ll say it again: in my opinion, the biggest weakness of the Fatrastan trilogy is the presence of the characters from Tamas’s trilogy. As a result of previous events, they’ve already started as overpowered. As such, in Gods of Blood and Powder trilogy Taniel and Ka-poel are not changed at all, doggedly continuing in their dreadfully boring, groan-inducing roles of saintly liberators with god-like powers. I’d even go as far as to complain that they regressed (Taniel with a sword? Seriously?). Yes, the Chosen One trope was indeed heavy-handed here and, frankly, took away a lot of my enjoyment.

And here we come to my main critique: the Gods of Blood and Powder trilogy seems to at least partially contradict The Powder Mage trilogy; suddenly, attaining godhood is not so bad, provided the right guys do it. Benevolent autocracy of a superpowered figure becomes an outcome we should all cheer and feel happy about, and Tamas’s revolution gets dialed down to a revenge quest of a wronged man. Well, I’m for one quite irritated by this turn of events (and that’s an understatement!). An enlightened despot is still a despot, and while democracy is not without its faults, trading it for autocracy can hardly be presented as a better choice. But the political repercussions of this outcome are obviously and conveniently missing from Blood of Empire, as they would have to come after the “happily ever after.” Which, all things considered, is rather surprising – after all, McClellan had spent a huge amount of this trilogy on political matters, so it would be fitting to devote a bit more thought to that particular choice of resolution. Adom’s wink is neither a very convincing, nor ultimately satisfying endorsement.

That said, Blood of Empire, after a relatively slow beginning, gripped my attention and kept me deeply engaged, proving a very satisfying, enjoyable read – at least till the disappointing ending. And yet, if that’s the intended conclusion to the stories set in the Powder Mage universe, it’s not a bad one. I’d still say that Tamas’s trilogy ended in a much better style, less Cinderella and more Cook, but that’s a personal preference 😉.