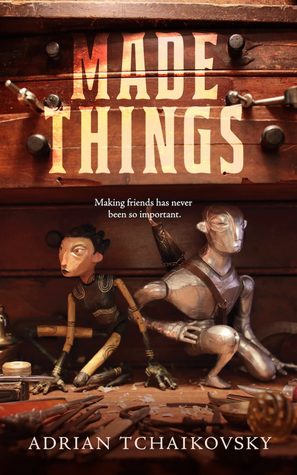 Adrian Czajkowski is probably most well-known to SFF readers for his science-fiction novel Children of Time – and, of course, for his unconditional love of spiders. Yet to me, his best work to date is unequivocally the ten-book fantasy series Shadows of the Apt, which I don’t hesitate to call his opus magnum – both because of the sheer length of the saga (and I’m not even counting the companion collections of short stories), but also because it is insanely creative, ambitious, and yet respectful toward its historic sources. Czajkowski has become a truly prolific writer, mixing many flavors of the SFF and even horror genres into unique, original work. Made Things, his novella/short novel, can be described as such an effort – a whimsical tale of adventure and magic in an alt-Mediaeval world.

Made Things are literally made things – little homunculi originally created by a human from a variety of materials, from metal and wood to paper and thread, and given life through magic. Now, having gained independence from their maker in somewhat traumatic circumstances, they find themselves completely on their own in a not very friendly, and frankly rather enormous, real world. They are drawn to the human world and human-made sources of magic: various trinkets, jewelry and items of great power, as magic imbues their bodies with a life-force and sentience. They are also drawn to people themselves, however dangerous that might be, because people tend to possess a lot of non-magic stuff – out of which a new body for a new member of the colony can be fashioned (or outright stolen, as the case may be for some of the more entrepreneurial little people).

One particular person they feel drawn to is a half-mage and half-thief, and a fully talented puppeteer, Coppelia. Coppelia is an orphan living dangerously, if somewhat poorly, in the famous city of Loretz. This city is a character in its own way – and an image of society in microcosm, equally full of wonderful, beautiful magic and very mundane (or is it always?) nastiness of a rather definite, cutthroat flavor. For Loretz is like a flame, to which all imaginative or desperate moths fly: the center of the world, literally oozing with awe-inspiring potential and promise, but never delivering on neither. Loretz’s currency is magic, jealously guarded and hoarded by mages, who live in sheltered opulence in an impregnable castle beyond the river. The rest of Loretz’s citizens, shunned by mages and treated as necessary evil, had been evicted to the other side of that physical boundary. Those blighted souls in the poor districts of the city don’t merit much attention, unless they possess at least a scrap of magic talent which could be used to the established mages’ profit. Then they are forcefully taken to workshops from which they never return. This is the fate that met Coppelia’s parents, and now she’s very careful not to share it, preferring poverty and thievery to realizing her magical talent. Because those without magical talent are left to their own devices, allowed to fend for themselves on scraps of magic leaking slowly from the enchanted fortress. But if they ever think of reaching for more, they are quickly brought to heel by the ever-present Broadcaps, the non-magical enforcers of the mages, cruel and fully embodying the old adage “might is right”.

Yes, that’s that kind of story: from the outset we’re set to root for the underdogs: the oppressed and have-nots, for the poor dreamers and social innovators in the meaning proposed by Merton – in short, all those who have no choice but to try make ends meet in whatever way they deem possible, whether within the limit of law or beyond it 😉 There’s a hierarchy to everything in Loretz, a stilted pecking order that at some point must break – because even on the non-magical side of the city the Broadcaps oppress their subjects, the crime lords abuse their power over their subordinates, and as a result, the average citizens are left with almost nothing: enough to survive from day to day, but not enough to dream. When a chance discovery puts the dispossessed on a crash course with the privileged mages, you can be sure that sparks will fly – quite literally at times.

Czajkowski belongs to a rare breed of writers who write with gusto, enthusiasm and enjoyment, all of which are clearly detectable in his every creation, and all of which are quite contagious as well. Made Things is no exception here. It’s a literary bagatelle, a lightweight, fast-paced trifle that nevertheless turns out to be highly entertaining. Of course, Czajkowski wouldn’t be himself if he didn’t try to introduce some weightier concepts into the mix – the abuse of power, the question of equal possibilities in the face of economic inequalities and their results: the inevitable transformation of economic differences to a plethora of deep social inequalities and consequential injustice. He also throws in some good-natured fun with the concept of gender and secondary sexual characteristics, as well as the issues of family, loyalty and trust. There are several clever and very cinematic ideas, such as a mechanical hand pointing directions, or the various types homunculi themselves: from androgynous humanoids to origami figures or even sentient pieces of string; the action patters along nicely and mostly without a hitch, and although it remains predictable to the very end – which is to be expected from such a short work – it is never boring.

Considering that worldbuilding seems the main ambition of Made Things, I would be amiss if I didn’t at least mention it: and indeed, it is solid and imaginative, as usual in Czajkowski’s works. Loretz is a stereotypical Mediaeval town that nevertheless gains independence and life of its own; it is painted in various shades, with broad strokes and minute details, and offers the readers also a glimpse of a wider world, teeming with opportunities. Admittedly, there are a few darlings that should have not escaped from the butcher’s block, but apart from them, Made Things is a quick, pleasant read. A palate cleansing, an enjoyable diversion from heftier, more demanding books – in this capacity the feisty novella gets my whole-hearted recommendation. I’d like to see Czajkowski return to this world to create some new stories about feisty homunculi and shrewd puppeteers. I know I’d happily read more about Tef and Arc – the most adventurous of the homunculi, as well as their evolving relationship with Coppelia.