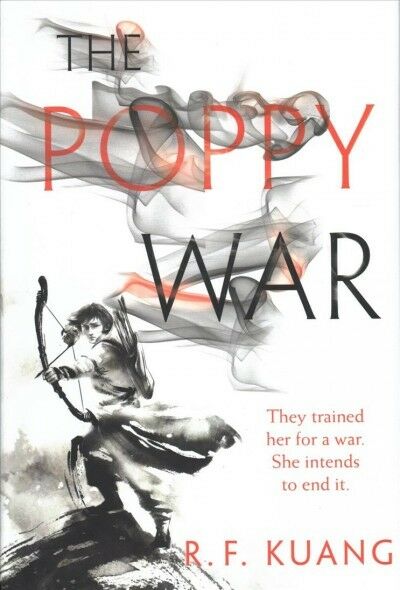 This turned out to be one of the more difficult reviews to write for me. Everybody and their uncle seems awed by Kuang’s debut novel, which reimagined the history of 20th century China into a vengeful fantasy of violence. The Poppy War was one of the rare books bound to become a bestseller, with publishers outbidding each other for the rights to the book. The enthusiasm was not without merit: for the reader from Western sphere of influence, Kuang’s novel presents an undeniably attractive image of China, fueled in equal measures by the elements of Chinese mythos already popularized in Western pop-culture and by the impression of mystery surrounding China as a fabled, distant land. The mythos, and stereotypes, are fairly easy to enumerate: martial arts’ prowess, Chinese zodiac and a large pantheon of demigods and demons, feng shui rooted in a belief of holistic spirituality, snippets of a heroic age long gone, when emperors ruled and Great Wall and Silk Road were built, and a vague concept of a collective social outlook, linked to Confucius. Add to it Sun Tzu’s Art of War, Ang Lee’s Crouching Tiger, Hidden Dragon, DreamWorks’ Kung Fu Panda series and Disney’s Mulan, and maybe some bits and pieces of more contemporary information regarding Chinese communism coupled with the evidence of the irrefutable economic success, and the vision of China in popular culture is more or less complete.

Of course, this image is volatile and nebulous – dependent on political currents as much as on cultural artifacts; to name only two important factors, recent U.S. trade war with China as well as the COVID-19 pandemic undoubtedly affected China’s image in the world. But the most stable elements of the China’s image in popular culture create in the collective imagination a vision of a powerful Oriental entity, imbued with secret knowledge: a dangerous force to be reckoned with, a sometime partner, sometime rival of Western states. Corollary to this image is the air of mystic mystery shrouding China’s past and its cultural heritage, building upon the vision of the country as a place out of time, where ancient wisdom is upheld by chosen few. It is an image actively managed by the governing political forces, and why not? After all, all the political states engage in PR and dream of managing their social image. Historical policy is a powerful tool in the constant play of geopolitical interests.

But why am I writing about modern geopolitics in a review of an epic fantasy book? Isn’t it all just make-believe, books about strange fantasy lands that simply have nothing to do with our reality and remain laudable thought experiments at best? Well, the answer is two-fold. Firstly, no fantasy world created by humans is free of our own world’s influence – sometimes more, sometimes less acknowledged, but always present. In case of The Poppy War the debt to the real world is openly recognized, as the author claims she wanted to create a fantastical what-if version of China’s 20th century history, dealing with real events and the resulting social trauma as well as existing modes of remembrance within the boundaries of an imagined reality. A lofty and laudable goal, but one that poses several risks. How do you write about past events in a way that is not gratuitious? How do you structure your narrative around such focal points, so that it remains original and respectful at the same time? Secondly, it seems to me that The Poppy War – consciously or not – subscribes to that vast effort of the creation and maintenance of the aforementioned cultural image of China. A mythical land of make-believe, where the superhuman founders of the Empire still live and shape events, and where wonders and impossibilities coexist with the mundane, in The Poppy War becomes an arena of real events, altered slightly to fit the fantastical world, but not enough to become unrecognizable. On the contrary: the book makes a barely disguised real event its fulcrum. And there’s nothing wrong with that, per se. After all, there are hundreds of books and movies referencing the Celtic and Norse and Greek mythology, not to mention the fabled cultural American imperialism ;). And yet, very few of the cultural works showcasing aspects of Western culture and its roots resort to an outright praise of genocide and racially skewed ethnocentrism – which in my opinion is the case of The Poppy War.

There have been enough reviews indicating the special-snowflakeness of the main protagonist, Rin, who achieves unparalleled success in whatever endeavor she puts her mind to, surpassing with relative ease all her mentors, a half-mythical founding father of the empire among them. Other characters, with the exception of Altan, the story’s designated sacrifice, are predominantly two-dimensional and seem to serve as props in the violent fantasy of retribution. Literary-wise, the writing is average, the efficiency of action sequences shadowed by some very clunky and awkward sections, especially in the department of character development. The plot is your average run-of-the-mill coming of age story, complete with a special school, teenage rivalry, harsh military training, and a mysterious, exacting teacher. It is also rife with tropes, the orphaned Chosen One dominant among them.

As for the worldbuilding, it remains tethered to the history of the 20th century China for the most part, freely reimaging actual events and political actors, mixing modern times with some kind of late Middle Ages – up to the point of the Nanking Massacre. The perpetrators, the imperial Japan dressed up as the evil-to-the-core Mugen Federation, are depicted as a faceless, despicable, unrecognizable mass incapable of anything but betrayal and murder; Kuang, to reinforce this image, liberally employs all major real and imagined facets of evil, from the massacre of civilians, to uniformed anonymity of the foe, to a mad scientist – probably the only Mugen citizen known by name – who conducts forbidden racial experiments on humans in a hidden lab. The nationalistic overtones are clear, and the author goes a long way to emphasize the intentional equivalence of Mugen with the 20th century Japan, and Nikara with China. Consequently, the Mugen are not just The Poppy War’s equivalent of orcs – they are much worse than that, a parasitic creation transplanted on a real, existing nation and inviting the readers to hatred: because among all this carnage, experienced conveniently up close, our protagonist slowly spirals to madness and is consumed by vengeance and its personification, a demonic/demigod entity of Phoenix. And yet, the atrocities perpetrated by her, which culminate in the complete destruction of Mugen’s homeland, i.e. total genocide of its civilian population, are construed as an excusable reaction to the trauma earlier experienced by her. Nanking Massacre was a truly horrible event, an atrocity for which there can be no excuse. The world should learn more about it, so that it stops being a footnote in history books. But using it in a fantasy book as a plot device designed to further the main character’s evolution into a vessel for a demonic/demigod entity and as a rationale for her own acts of genocide seems beyond bad taste.

Yes, one could argue even this is nothing new and that a similar plot device – using the tragedy of genocide as a foundational experience for a superhuman – has been employed before in pop-culture, for example in the story of the Marvel mutant Magneto, who often plays the role of the villain: a ruthless, devout believer in an extreme form of social Darwinism. The difference, however, lies in the fictional world’s response to such leanings – with Magneto as a villain, however sympathetic, the heroes work together to actively oppose his plans, revealing the unending, destructive madness of the vicious cycle of violence and vengeance. In The Poppy War, the protagonist’s atrocities are explained away and seemingly absolved as a result of experienced trauma. Well, this line of reasoning had also been used in real life, as the history of Europe after WWI can teach us.

I don’t intend to turn this review into an academic discussion on the universality vs cultural relativism of human rights, nor am I mounting a defense of political correctness here, though both would be valid topics for a completely different discussion; but however we judge the current status of the generalized social worldview in the Western sphere of influence, one undeniably positive outcome of it is that there aren’t many mainstream contemporary works praising slavery, genocide or racism. And so it remains somewhat of a mystery to me that a book entertaining a vengeful realization of such ideas in the guise of an exotic epic fantasy is met with enthusiastic reception, even garnering a Hugo nomination. I realize The Poppy War is only the first installment in a trilogy, and that the subsequent books may paint an altogether different picture of the events. But after reading The Poppy War I’m no longer interested in the rest. I picked it up expecting a heartfelt, visceral account of trauma and remembrance, and what I got instead was a jumble of real and fictitious events designed to prop up a vengeful fantasy of mindlessly nationalistic violence.