My turn to write something, and I’m in a bit of trouble. Reading non-genre, doing overtime at work and playing games, there’s simply not that much new stuff to review. I wanna rant about the Witcher show, but I’ll have plenty of space for that in our upcoming two-shot. I’m not happy with the TV version of one of my favourite sagas, I can tell you that in advance. Not the worst show, but not a good adaptation.

Then I thought about reviewing a very interesting non-fiction by S.C. Gwynne, Empire of the Summer…, about the Comanches, their rise to power and their fall. It’s a very interesting perspective on Native American history, and a new one for me. But then I thought it might be a pretext for another two-shot, as among Ola’s favourite non-fictions of 2019 were Richard Slotkin’s more scholarly works on similar issues. Lets do a take on another genre, one of the classic ones!

So, I decided to write a few words about a non-computer role-playing game I recently started that I think is fun and accessible for people without much experience. As tabletop RPGs are destined to forever be an elusive niche, I’ll start with a few words of general introduction. Still, it’s not designed as in-depth review, these can be found on the rpg sites. Just a glimpse into a field of activity that keeps me from reading and reviewing more books 😉 and perhaps a suggestion of a fun group activity. 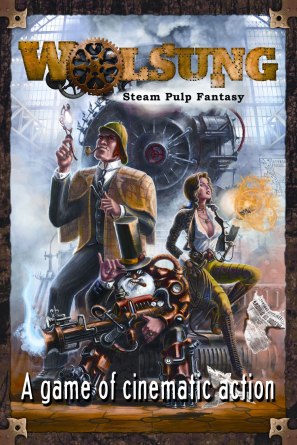 A simple (if that can be said about something with 400+ pages of rules… most players only need to read 16 pages, though), fun game. Less known than it’s boardgame version, but also less expensive and easier to play. And a shortened, but still allowing for a test play, version, is available online for free.

Tabletop RPGs in a nutshell, are a shared story experience. In a series of meetings a group of usually 3-6 players act as protagonists of an adventure narrated by one of them, designated as a Game Master. Each player acts as one of the main characters, while the GM controls the rest of the world, all the other characters players interact with and all the events. As a rule, you don’t play to win, or against the GM or other players – it’s to roleplay your character and participate in an adventure.

I’ll quote one paragraph from TVTropes’ take on that:

The default format for a tabletop RPG is for one player to be selected as the Game Master while the others each create Player Characters who will collectively act as the heroes of the game’s plot. Individual sessions or “episodes” of the game are commonly called “adventures”, and the ongoing game story itself is usually called a “campaign,” a holdover from these games’ own heritage from tabletop wargames.

The game can be many things. It can be a bunch of kids killing monsters in imagined dungeons, like in Stranger Things. It usually is, and most of readers familiar with RPGs will probably have D&D experience. Wonderful things can happen in Faerun, but most of them include killing goblins and zombies.

I also love this kind of game, but it’s not the only one available. As I’m getting older, and so are my co-players, we want to go beyond the fights. We also have less and less time, so in effect we need more sophisticated games that are easier to learn and play. That, you can imagine, not always works out 😉

So, anyway, recently, during an after-work beer, I was talking to a group of serious, over-30, corporate accountants and we discovered that everybody is either playing tabletop RPGs, or used to play them and would like to try that again. Perfect! And one of them is trained in a new system, one I’ve never tried, but have on my bookshelf (that happens often, I’m sometimes too optimistic, buying more games than I’m able to play… common problem of tabletop and computer gamers alike). It’s a system a bit different from what I play most often, but one with relatively simple, interesting mechanics, and fun, if not entirely original fantasy world where the adventures happen. It took us two or three months, but we finally met once, and then, immediately, for the second time, and the game started very promising!

As every RPG game, Wolsung is a world to adventure in, and a set of rules to play by. 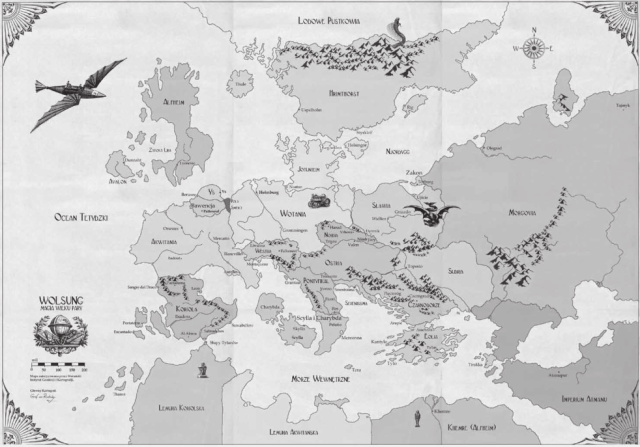 One glance at the map informs us it’s fun before creativity. Many fantasy writers go cheap on worldbuilding, but in my opinion it’s less of a sin in games. Here, maps are gameboards for our characters to wonder around and have fun. A degree of familiarity give by the obvious inspirations can help. Here, we have, basically, Europe. Each country is based upon a real-world one. Time is… Victorian, and also somewhen between world wars, as far technology and politics are concerned, but the WWII-analogue already happened. Which gives us a chance to chase zombie-Nazis, as my team currently does 😉

Most of the usual fantasy races are represented, and stereotypically, which, heavily mixed with other stereotypes, makes for such charming stuff as Halfling Mob, Elfish-English aristocracy, and Swiss-Dwarfish bankers. Stereotypes, sure, but the game mechanics encourages you to defy them, if you want.

There is also magic, and techno-magic, and dragons… a cheerful steampunk world. Something that would not make great literature, but it does make for a delightful sandbox to play in.

And it is served well by the rules, based on another system players might be familiar with, Savage Worlds. Not that many stats, only one kind of dice, some markers and regular playind cards. Character sheet, visible on the picture above, is also not that complicated. All in all, I’d say it’s much easier too learn than D&D.

You got to learn, but a regular player can only read the starter – and that’s no more than a manual for a serious boardgame. Game Master needs more preparation time, but that means only one person needs to invest more time, and then find some victims… err, players, who can be brought into the game more easily.

Interesting things – it’s not just slaying goblins. Sessions are stories when all kind of things take place, and all are relevant to the story, important and rewarding. During our first session, there was no fight at all, just some investigating and political manoeuvring. There is a simple mechanics for that, but also a place for your imagination. Not just dice-rolling, mechanics reward innovative thinking and quick wit. From my early days, I remember people getting discouraged by the fight-intensive games, where there was no chance, and no experience points, for non-lethal creativity. In Wolsung there are three equal types of confrontations: fight, chase and debate, and it was, for us, a welcome change.

Concluding, I really think tabletop RPGs are a fun activity for all ages, and I encourage you to search around, perhaps there are people eager to play around you? Maybe some co-workers share your love for genre, and it’s enough to look  around to discover them? Maybe the semi-obligatory after work events might become less tedious, or even you might find a new gaming group/book club 🙂