Sometimes we go a bit outside genre, and it’s not always politics 😉 This occasion, however, definitely merits this little jaunt beyond our usual hunting grounds.

Piotrek: Well, it is election day in Poland, and the stakes are high, but it’s against the law here to discuss politics on election weekend. Lets just say, I’m depressed and did not prepare any champagne for the evening. Looks like four more years of catho-national populism. 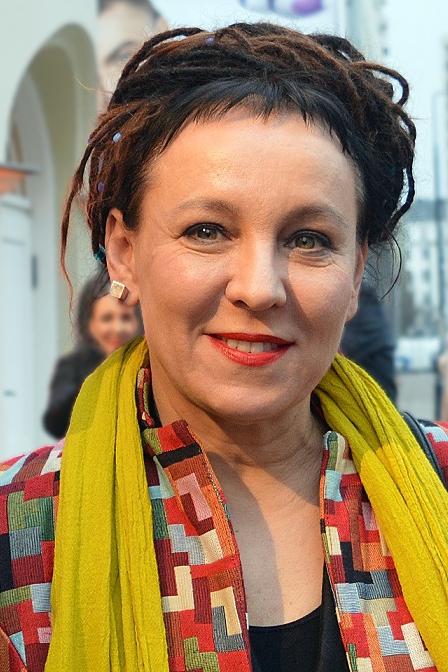 Good things do happen, though, and last Thursday a very distinguished Polish writer got a Nobel for 2018. Who is she? A dreadlocked feminist winner the Nobel needed, claims Guardian, and I very much agree. I’m not always happy with Swedish Academy’s choices, but this time I am, and not because she’s Polish (who cares) and only partially because of her political views (which tend to be pretty close mine, the regime hates her 😉 ). I see her books as both insightful, very up to date – but rooted in the troubled history of our region – and extremely readable.

Ola: I will abstain from commenting on politics, though I can proudly say I did vote, and I did my bit of lobbying to ensure a polling station was opened in Auckland for that occasion 😉 As for Tokarczuk, I must admit I have only read one of her novels to date, her debut Prawiek i inne czasy, and I wasn’t swept away. I did hear her later books were much better, especially the over a 1000-pages long behemoth, Books of Jacob, and I do intend to read it. In Polish, obviously, and let me tell you, it is a good feeling to read a well-written book, in which Polish is actually the original language 😉

Piotrek: To our English-speaking audience I suggest one short text, and a movie that is available on Netflix (or book that gave Tokarczuk Booker Prize the movie is based on, titled Flights).

The text is a transcript of her short and beautiful speech, How Translators Are Saving the World :

I think culture is the complex process of striking a balance between private and communal languages. Collective languages are trodden routes, while individual languages perform the functions of private paths. Collective languages are agreed upon forms of communication that have been adapted for society to be as understandable as possible to the widest range of that society’s members; above all, they are to convey content that enables the construction of a similar or identical picture of reality.

The worst is that in the process of creating such politically marked collective languages, words get stolen. Some neutral, mostly forgotten, highly archaic word suddenly retrieved from the discard pile makes its way onto banners and political platforms. One example from my own country today is “nation.” It turns out that, stripped of its historical context and dusted off a bit, it serves perfectly the construction of the new world order. It becomes so completely appropriated that even those who speak another collective language cannot use it now, since, weighed down by new connotations, it has become a danger.

There is no worse affliction than the loss of a person’s private language, its replacement with the communal one. Politicians, officials, academics, and priests may all suffer from this. And the only possible form of therapy for this affliction is literature: coming into contact with the private languages of artists permits the reader to strengthen her resistance to an instrumentalizing vision of the world. This is a powerful argument for reading literature (the classics, too), for literature demonstrates that collective languages once functioned differently, and in conjunction with this, other visions of the world arose. It is precisely because of this that it is worth reading—in order to behold those other visions and to be reassured that our world is only one of many possible worlds and that we are surely not confined to it forever.

And the movie is Spoor, 2017 work of Agnieszka Holland, a powerful and grim eco-thriller that will not improve your opinion on the hunting community. It’s available on Netflix! The novel’s title is Drive Your Plow Over the Bones of the Dead…

Ola: And both the novel and the movie elicited a rather heated reaction from the Polish nationalists – which, I believe, was the point, but I doubt even Tokarczuk herself expected such a backlash. Suffice to say she had to resort to hiring a bodyguard for a while 😉

To sum it up, Tokarczuk’s thorough in her research, her grasp of the complexities of life in the border regions where influences of many civilizations and cultures cross makes reading her books a real treat, and her prose is deeply humanistic, thought provoking and very accessible – especially as she is also a great craftswoman.

So – whenever you want to go beyond genre, consider Olga Tokarczuk. Or just see the movie 😉

Edit: it’s Monday now, and I have a post-election-day hangover… our nation reliably disappoints. Perhaps I should just accept the divide, there’s no one Poland we would all be part of. But all we said about Tokarczuk is still valid 🙂

Edit#2: it seems we were able to reclaim the Senate, in Polish political system a rather powerless body, but it will make further destruction of the rule of law a but more difficult for the regime. Withe the Left back in parliament there might be interesting developments 🙂