Buoyed by the success of our Deadly Bookish Sins tag we decided to even out the playfield – and created a corresponding Bookish Heavenly Virtues tag 😉 We had a lot of fun writing the questions and answering them, and now we hope you’ll enjoy reading them – and, if you do, we invite you to participate in the tag as well :).

CHASTITY: Which author/book/series you wish you had never read?

Ola: Aaand we start with a bang 😉 The two that most easily come to mind are Patrick Rothfuss’ The Name of the Wind (DNFed around the junkie dragon mark and I only wish I threw it down sooner) and Justin Cronin trilogy (DNFed within first 100 pages of the third installment – what a waste of time). I’m usually pretty lenient when it comes to books, as they are in fact someone’s years of hard work and dreams. But I absolutely abhor waste of time on things I dislike, as the theory of alternative costs plays in my mind different scenarios of what I could have done with that precious resource, and the two examples above represent exactly that.

Piotrek: It’s a hard one. I usually only go for books I can be sure to enjoy at least a bit, and some of the really terrible ones I revenge-reviewed, so it was not a waste of time, was it?

One case where I could have saved the time and read something else, even at a cost of not having a vitriolic review to write, was the Iron Druid Chronicles. Details – in the linked review 😉 but I have to say, the more time passes, the more I’m convinced it’s a case of urban fantasy tropes tortured inhumanely for no good reason.

TEMPERANCE: Which book/series did you find so good, that you didn’t want to read it all at once, and you read it in doses just to make the pleasure last longer?

Ola: Easy. Glen Cook’s Black Company :D. I still haven’t written the review for the last book in the series, but let me tell you – it does not dissapoint. I’m not really a mood reader, I read too many work-related stuff to have that luxury, but I do like to savour really exceptional books – they are a rarity and deserve special treatment (not to mention that I deserve special treatment as well! ;)) I took my time with Dan Simmon’s Hyperion – I absolutely loved that book, sadly Endymion didn’t live up to its predecessor and left me slightly disappointed (which I treat as an excuse to not having written a review yet!). Another good example would be Robin Hobb’s Fitz and the Fool trilogy: Fool’s Assassin, Fool’s Quest and Assassin’s Fate; it wasn’t only stunning, it was also utterly harrowing and I needed to pace myself with reading it.

Piotr: It’s a feeling I get often. When I secure a great series on my vast bookshelves, I often wait years. I have some such cases waiting still for their turn. I read a bit, to make sure it really is that good, and then I wait for the perfect moment 🙂

I could, actually, mention here all the series Ola wrote about above! I’m one trilogy from Black Company’s end, and I hesitate to start that last trilogy, because then I will only have the new prequel. Hobb I actually feel a bit guilty about not having read yet, but I’m quite certain I will enjoy it all. And I even bought Endymion already.

What I like the most about this tactics, is the feeling I get when I finally finish a good series – that it was worth it!

CHARITY: Which book/series/author do you tirelessly push to others, telling them about it or even giving away spare copies bought for that reason?

Ola: Black Company again (I actually did give away my second copy of the first book), and Adrian Czajkowski’s Shadows of the Apt. The elevator pitch for the latter proved quite difficult and rather awkward – many of my friends looked at me strangely when I got overenthused about “a WWII between something like Greek city-states inhabited by tribes of people divided according to certain insect qualities they have been granted by their insect deities in a magical world without Vertebrate on a brink of industrial revolution propelled by war… and there’s even Churchill! (deep breath)” 😉 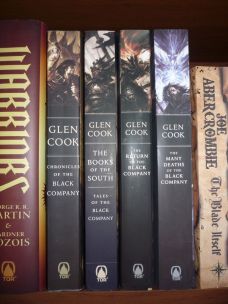 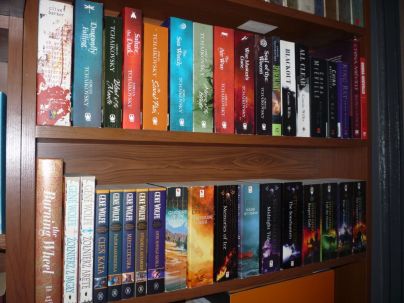 Piotrek: Yeah, I know how it feels, and Czajkowski is my number one recommended contemporary writer, together with McClellan. Bugs or gunpowder magic 🙂 I have a few successes here, although not everybody is able to appreciate them.

I also try to make people read Rabbi’s Cat, one of my favourite graphic novels, especially when I talk to someone who claims comics are for kids. Here I’ve had less success so far.

DILIGENCE: Which series/author you follow no matter what happens and how long you have to wait?

Piotrek: I will, I still believe, one day read the closing volume of the Song of Ice and Fire, and I even hope that I will be satisfied as a reader. Season 8 of the show is clumsy, takes inexcusable shortcuts, but broadly get to where I wanted the story to get. GRRM’s version is bound to be better, if convoluted. I’ll wait and I’ll give it a chance.

Ola: Should I mention Cook again? 😉

Piotrek: Have you read his fantasy-noir detective novels? It’s coming more and more often into my attention…

Ola: Not yet, I’m currently in the middle of reading the Dread Empire series, but will definitely get there 😉

Yeah, I will follow ASoIaF too, but without much trepidation whether it’s actually going to happen or not. I enjoyed Fire and Blood, and I think Martin still has the potential to get the series where he wants, but frankly, I really really appreciated only the first installment, The Game of Thrones, and was quite content with the two subsequent ones. Number four and five could readily be rewritten, in my opinion – they are much below the level of the previous books 😉

I did diligently follow Discworld novels, but unfortunately no longer… there will be no new books. Roger Zelazny is another author whose literary legacy I intend to read in its entirety – and I actually do not have many unread books left. Not all of them are true  masterpieces, but his imagination and literary panache is something I always appreciate. Similarly, I have already read almost every novel by Stanisław Lem, and have his non-fiction on my shelves, waiting to be read.

I am still keeping track of Patricia Briggs’ Mercy Thompson series, though without the initial enthusiasm, as I feel it should have ended by now. That’s actually the common problem with ongoing series which have no end in sight – at some point the storytelling seems to take a backseat to money-making.

PATIENCE: Is there an author/book/series you’ve read that improved with time the most, starting out unpromising, but ultimately proving rewarding?

Piotrek: I’m one of the many people unimpressed with the Storm Front, but encouraged by Ola I gave Butcher a second chance – and I came to love Harry Dresden. I was initially distrustful, but the writing got better, and the author convinced me it’s not just the jokes, but a well thought-through world and a story that goes beyond the crisis of the week. And apparently the next one is coming soon! Finally, I’m not a fan of all the things his writing in-between Dresden stories.

Ola: Yes, Dresden novels definitely improved with time, and I was glad to doggedly keep on even through weaker installments, because they are fun. I was also not overly enamored by early Jason Aaron Marvel work (especially Avengers vs. X-Men, and Star Wars, blah), but I very much enjoy his new Thor and The Mighty Thor run!

KINDNESS: Which fictitious character would you consider your role-model in the hassle of everyday life?

Ola: No obnoxiously larger-than-life heroics, but the grinding mills of everyday routine? It’s a tough one. I could easily list a dozen or more amazing, complex, nuanced protagonists, but I don’t think “kind” would ultimately be a word I could use to describe any of them. Well, maybe one or two were kind, but even then – that wasn’t a facet of their personality easily seen by others ;). Besides, everyday life was a real challenge to the nearly all of them anyway…

I’ll go with two true zen masters of everyday: Nighteyes and Brutha from Pratchett’s Small Gods. Nighteyes was indeed tirelessly kind, loving, and fiercely loyal. He elevated living in the present to a form of art, and could appreciate what he had like almost no one else – at the same time being able to appraise and plan for the future. Brutha, on the other hand, was such a generous, affable soul, able to understand and forgive almost anything.  Plus, his patience was nothing short of miraculous ;).

It is a hard one. In most novels I read I choose a character to identify myself with, within the context of the story. They might even be an inspiration,  though luckily I don’t participate in dangerous world-saving missions. If we look specifically for kindness… my kindness is a bit rough, closer to Vimes than Brutha 😉

Sir Able of the High Heart, the protagonist of Gene Wolfe’s Wizard Knight, a book I’m reading right now, is kind and understanding in a way you’d expect from Le Guin’s protagonists rather than from Shadow of the Torturer’s author. He’s delicate, willing to go a long way not only to do good, but also not hurt the pride of people around him while doing so. I’m often clumsy even when I’m meaning well.

HUMILITY: Which book/series/author do you find most under-rated?

Ola: Besides Cook? 😛 I’ve never even heard of Neal Asher before I read Bookstooge’s recommendations – and now I absolutely love his Polity series. Thank you, Bookstooge!

In my opinion Tim Powers is another author whose books should be better known – people associate him with the worst Pirates of the Carribean movie, On Stranger Tides, which is totally unfair, as his books are consistently brilliantly twisty, masterfully written and truly, absolutely mind-boggling.

Piotrek: I’m yet to read Asher, but I absolutely agree on Tim Powers. The Drawing of the Dark is just brilliant, and so are most of his novels. Well written, erudite, and, at least for me, fun. I’m not sure if we can put Cook in this category, perhaps he should be recognized even more, but his fame goes quite far.

Also… Connie Willis? She has many genre prizes to her name, but I feel she’s not appreciated as much and as universally as she deserves. One of the writers whose books give me the most joy, and so many readers never heard of her.

And Czajkowski, despite me and Ola recommending him to everybody, he still does not get enough attention, having written multiple heavy tomes of great literature!

That would be all from us, how about you? 😀