In celebration of Tove Jansson’s 105 birthday on 9th August, we decided to join Paula Bardell-Hedley in her quest to revisit Tove Jansson’s books and art. Jansson was an accomplished writer and a professional artist, but her main legacy, which captured the hearts of young and old alike – remains within the covers of books describing the wonderful world of Moomins. While initially classified as children literature, the Moomin books and comics hold an everlasting appeal for readers of all ages.

This blog post, in a shorter and slightly altered version, previously appeared on Re-Enchantment on 31 March 2016.

I was enchanted by the Moomins a long, long time ago, and the enchantment still holds, even when I read the books in question aloud, infecting the curious minds of a next generation with these wise, infectiously joyful and nostalgic tales. We’re talking about books here, mind you – not that dreadful Japanese-European animated series, nor the gloomy Polish puppet animated show (although I still remember the Groke from this show – with a memory of lingering terrified fascination).

Tove Jansson wanted to be a painter; she studied art in Sweden, Finland and France, and she painted intermittently throughout her life, both commissioned and private works. The images of the Moomins and the whole Moomin world were also created by her – apparently the prototype for Moomin was Jansson’s caricature of Immanuel Kant. She drew “the ugliest creature imaginable” on the toilet wall and named it Kant after she lost a discussion about the philosopher with her brother. Fortunately, the final image of the Moomin is much more friendly and blobby, with a big, round nose, a big, round belly, short, fat arms and legs, and a thin, slightly incongruous tail. Tove Jansson’s illustrations form the world of Moomins as much as the text – and they are in perfect harmony with each other.

There are eight novels set in Moomins’s world, plus a collection of short stories. There’s also a handful of picture books and a huge collection of comic strips which Tove drew with her brother Lars. I am a dedicated fan of all the novels, although I like some of them more than others. And again, as with every example of children literature worth its name, these books are for children and adults alike. They deal with a plethora of very serious themes – from catastrophes, including tornadoes, comets, floods, and a magician’s hat, through many complex, ambiguous emotions such as loneliness, fear, tolerance and indifference, and the precarious equlibrium between need for independence and belonging, to the very real pains of growing up and learning the meaning of responsibility and care. Let’s take a close look at the novels, one by one:

The earliest Moomin book, in which the Moomins don’t look exactly like their subsequent selves. It’s a very simple adventure story, the Moomintroll and his Mom are on a dangerous search for the missing Dad. Written during the WWII it can be viewed as an accurate depiction of the war-related anxiety and the dislocation, as well as a search for a safe place in a dangerous, dark world. Sure, all of it is there. But I’ve also found a different interpretation – the book was intended by Jansson as a positive, intentionally naïve distraction from the reality of war.

This book starts with a bang, and afterwards, in a truly Hitchcockian manner, the stress continuously increases. Another catastrophe, even bigger this time – a comet coming right at the Moominvalley – is threatening to destroy the world. Moomintroll and Sniff travel through a danger-ridden, wild country to the Observatory in the Lonely Mountains to confirm whether the comet will hit the planet or not. Among a multitude of absurd, funny, and thrilling adventures they meet the majority of the most important secondary characters from the Moomintroll world – from Snufkin to Hemulen and to Snorkmaiden and Snork. Among them, however, Snufkin is by far the most crucial one – Moomintroll’s best friend, always alone, always outdoors, reveling in his loneliness, independence and unrestrained freedom.

The original title, Magician’s Hat, much better reflects the content. It’s the most popular story about Moomins – and the most fantastical as well. The foreboding magician flying on his black panther in the search for a King’s Ruby is for the majority of the novel a hidden presence, incidentally shaping the events in the Valley when his tall black hat is found by Moomintroll, Sniff and Snufkin on their first spring walk – and brought home. Lots of strange adventures happen before Moomins realize that the hat has magical properties and whatever is put into it changes – thankfully only for a time – into something else. The valley is later visited by a strange, reticent pair of small creatures with a big secret – and lots of Freudian interpretations were written on this topic, so there’s no need to repeat them here :). Everything ends happily for everyone involved. Finn Family Moomintroll is also the first book where the Groke appears.

The tongue-in-the-cheek memoirs of Moominpappa can be easily compared to the tales of such mighty braggarts as Baron Münchhausen Davy Crockett or Pantagruel. What don’t we find there: sea monsters, submarines, mysterious islands of treasure and fun, entrepreneurial inventors, a nervous ghost and one very irritating Hemulen who insist on obeying the rules! [shudder]. Moominpappa is a charming rascal – a notorious liar, a dignified braggart full of himself to the bursting, a totally unreliable father figure as well as a great, loyal companion to those he deems his friends. Here we look at him at Tove’s behest with an invariably loving eye – we do laugh, and snort, but in the end it’s an indulgent chuckle rather than a sarcastic snigger. The Memoirs of Moominpappa is a great story, full of self-conscious, gentle fun and reminiscent of crazy tall tales of old. 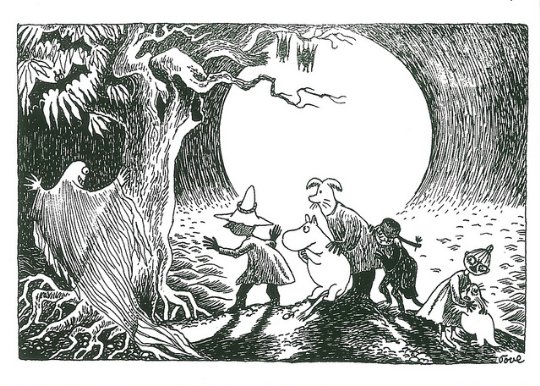 A catastrophic-theatrical novel. When volcano eruption causes a massive flood which completely covers the Moominvalley in water, the Moomin extended family, plus various refugees, is forced to flee their home. Fortunately, they are able to board a strange, empty house floating nearby. They soon realize it’s not empty and, more importantly, it’s not a house. As the younger members of the family get invariably lost in the flood-caused chaos, the remaining members form the new theater crew and learn that “the show must go on”. As they prepare a new play, bloody and dramatic, and containing the requisite lion, they learn a thing or two about themselves. The grand premiere, in a twist worthy of Shakespeare, reunites the Moomins with their lost family members – and grants them many new acquaintances and friends in the process.

The book is mostly a fun and crazy ride through the idea of theatre, with a freely acknowledged debt to Shakespeare, but it also represents a strong voice of protest against blindly followed rules – and needless borders. A small story arc is devoted to Snufkin planning his long-delayed revenge on the Park Keeper. In a wild case of domestic terrorism Snufkin tears down all notices banning a variety of pleasant activities and attacks the Park Keeper by planting on the Park grounds electrified Hattifatteners. He also sets free over twenty little vagabonds who immediately adopt him as their father. The tortures of unwanted responsibility resulting from an act of exhilarating rebellion described by Jansson are both hilarious and painfully accurate.

This book marks a turning point in the general mood of the series. It is much more realistic and dark than the previous novels, and deals with more “adult” themes: loneliness, responsibility, fear, the feeling of belonging. This book is also more introspective, focused on Moomintroll who finds himself fully awake in the middle of winter, when all of his kind are deep in the winter hibernation. Moomintroll discovers an alien, unfriendly world to which he doesn’t belong, and he feels that pain very acutely. This strange new world is explained to him patiently by Too-ticky, a solid, down-to-earth person inhabiting their bathhouse, and showed to him, much less patiently, by Little My, one of the most popular Moomin characters.

Little My is a character, all right. She’s absolutely independent, brash, adventurous and infinitely resourceful. Many girls wanted to be like Little My, my younger self included ;). On the other hand, she is also slightly sociopathic. Emotions of others are a mystery to her; even more, they are mystery better left untouched. Others serve as a background to Little My exploits; she mostly finds them amusing. A modern ascetic, who doesn’t own anything and in need always uses things belonging to others (usually not bothering to ask permission, being a firm adherent of the rule “It’s easier to ask forgiveness than it is to get permission“), Little My is in some aspects as egotic as Moominpappa. Nevertheless, we still admire her, daydreaming of a moment when just like her we could get rid of the shackles of what’s socially acceptable or expected.

The darkest and most serious of all Moomin novels, Moominpappa at Sea deals with the problems of growing up. And it’s not only Moomintroll who needs to evolve and mature and accept change as something inevitable, it’s also both of his parents. The only thing unchanging (except for the sea) is Little My, adopted by the Moomin family. This is by far my favorite novel about Moomins. It’s very poetic, the imagery of the lonely island in the middle of the sea both haunting and mesmerizing. At the same time it’s very unsettling and full of anxiety – as it deals not only with the pains of understanding oneself and the world around, but also with the inevitable process of realizing one’s failures and flaws. It’s a very realistic story about accepting one’s responsibilities, about shedding illusions about oneself and the world around, about the complex nature of relationships, having the potential of deeply transforming both sides. In this vein can the Groke’s presence be interpreted, in her new and more sympathetic incarnation. 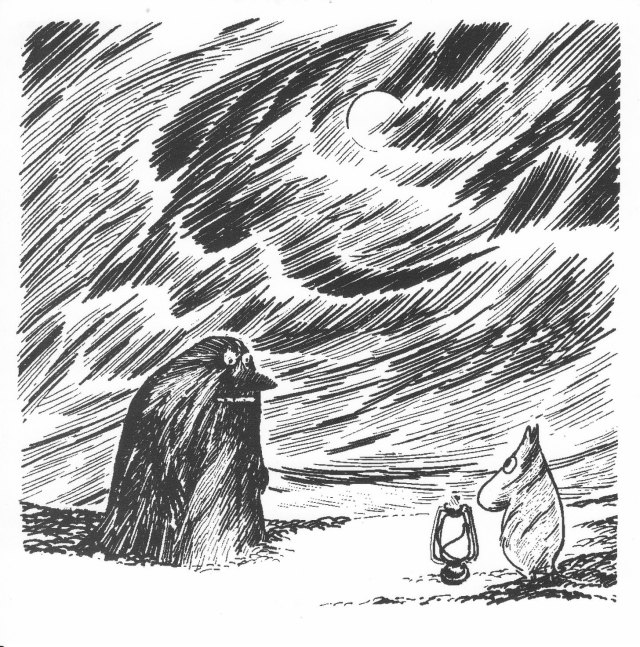 This book deals with loss and loneliness. Set in the same time as Moominpappa at Sea the novel depicts various characters coming to the Moominhouse in the beginning of winter, only to find the Moomin family gone. It’s a psychological portrait of orphanhood, or bereavement, of reconciling the idealized version of the world with the reality. Moominvalley in November is very much an adult book, purportedly written by Jansson as a form of dealing with her mother’s death. It’s an exceptionally mature, melancholy novel that still maintains a bit of wry humor and a guardedly hopeful tone, ending with the Moomins’ boat coming to the shore. Jansson wrote later ”I couldn’t go back and find that happy Moominvalley again” – and that’s why she stopped writing about them.

A collection of nine short stories, the book tells tales about different inhabitants of the Moominvalley. They belong to the late period, melancholy and guardedly optimistic, and deal with themes such as feminism, independence and obedience (The Invisible Child), coming to terms with one’s own difference (The Hemulen Who Loved Silence), fear of the unknown (The Fillyjonk Who Believed In Disasters), or the perils of wild imagination (A Tale of Horror). They are wonderful, funny and nostalgic and sad, and they stayed with me for years.

In short, Moomins’ world is a place for everyone. Tove Jansson managed to create a world where fantastical merges seamlessly with realistic, where in-depth psychological portraits flawlessly complement crazy, abstract adventures, where otherness becomes everyday and nobody bats an eyelash if you decide that the preferable way out of your room is through the window, by the way of a long knotted line, and the most efficient way of skating is on the edges of kitchen knives. It can be perceived as a literary safe haven, an imaginary refuge from the troubles of everyday world – but it can also be viewed as a reflection of our own world, albeit a wiser one, more than ours full of understanding, care and respect for others, and much needed magnaniminity.