Piotr: I have to admit I had some doubts about the series, whether we’d be able to continue it for long, but here we are, post no. three, and I love it! And revisiting this one has been a delight!

Ola: Indeed, we may not be overly timely with our regular posts, but Nostalgia posts appear every month as planned 🙂 And it looks like we’ll be continuing it in the foreseeable future, as there are many other topics to cover. There are some trips down the memory lane that we’d like to forget, like Robin of Sherwood, but there are others, fantastical and wondrous, and confirming our fondest reminiscences – like Batman: TAS, and Willow.

Piotrek: Willow is a fantasy movie from 1988 that many considered to be Lord of the Rings light, made with the technology of the day. I’ve seen it ages ago, when the world was young and Peter Jackson was making shitty/cult horror movies, and it shaped my views on fantasy movies, more than any other 80-ties classic.Then LotR came and the new era of modern fantasy and I forgot about Willow.

Ola suggested we include it in our Nostalgia series, and I re-watched it recently with great pleasure. Obviously influenced by Tolkien, although not nearly as ambitious, it is a pretty good movie in its own right. Funny, imaginative, not too complicated, but at the same time quite skilful with its handling of the basic tropes. It’s a brainchild of George Lucas and he was good back then, when he did not try to make things too complicated.

Ola: Willow had been my first foray into fantasy movies, around the same time as my reading of Lord of the Rings – and it was a great experience. I enjoyed the child’s perspective of the camera, the fact that the titular hero’s strength did not lie in his sword skills or magical power, but rather in the very human ability of doing the right thing whatever it takes, and making friends:)

Piotrek: The story itself is quite simple. In a world almost wholly conquered by the evil queen Bavmorda there is a prophecy about a female child that will bring her down. She orders the childed hunted down and brought to her keep. This task is undertaken by queen’s daughter, Sorsha, and her general, Kael.

Ola: The name of evil queen made me laugh even back then, as in Polish it sounds like “Fun mug”… She does look like evil queen from Disney animations, and definitely gives the impression of having fun while giving the stereotypical lengthy villainous monologues.

Piotrek: On the side of the baby, we have Willow Ufgood, dwarf/hobbit wannabe wizard, the warrior Madmartigan – mercenary and womanizer, Han Solo kind of scoundrel, pixies (here called Brownies) and an enchanted sorceress, Ranziel. The main protagonist – Willow – is small and inexperienced, and in a world he doesn’t know he has to find allies to protect the child and, ultimately, fulfill the prophecy.

Ola: Madmartigan was my favorite character of the movie, and Kilmer seemed to have a lot of fun playing him. It seems like Lucas found a working recipe for his protagonists and decided not to change it a bit. And just as Madmartigan reminds me strongly of Han Solo, Willow has a lot in common with Luke Skywalker: the general naivety and lack of worldliness are coupled with a youth’s capacity to be constantly surprised – and, of course, a real talent for finding good companions.

Piotrek: Another unusual thing – the love story already had happened, before the movie even started. Willow is married, has a daughter he dotes on, his family is his happy anchor and his goal is to get back to his loved ones. They also support his decision to go on this risky journey to help and protect the defenseless baby!

Ola: Well, to be clear, there are two love stories, and it’s the other one – between Madmartigan and Sorsha – that actually propels the action forward 😉 The forbidden Romeo-and-Juliet type of romance feels quite organic here, and is needed as the other bonds between the characters, much as they are commendable, don’t have this kind of watchability (well, Madmartigan and Willow’s relation was for the younger me a source of entertainment – especially that the Polish translation was surprisingly good 😉 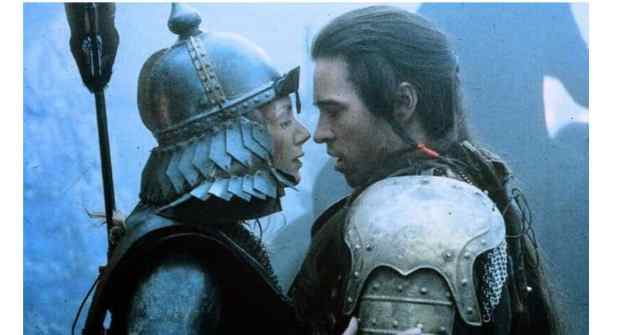 Piotrek: Similarities to Tolkien are obvious and plentiful. Wizards, dwarves/hobbits (I’d argue the Nelwyn are more hobbits than dwarves), quest that ultimately takes the team of protagonists into the stronghold of the Big Bad… it’s easy to find detailed lists online. It’s been also said George Lucas denied that and claimed it’s a number of well-known mythological situations for a young audience. And so it is, and there are so many books and movie that copied Tolkien without the light-heartedness of Willow. Now, we do have LotR filmed, and we can judge this piece of art on its own merits.

Ola: It is by no means a deeply original movie. It is in fact not much more than a mashup of many old tropes, the most noticeable being the same as Star Wars: a hero’s journey – but a mashup done well, inherently watchable and fun, which is more than can be said about many newer flicks. And I do appreciate the slight twist to the Chosen One trope – as the Chosen One in question is a baby, she plays the role of an object of power to a much higher degree than she actually shapes the action as a conscious actor.

Piotrek: I judge it to be funny and interesting, but not great. Could have been a bit more original, plot more complex, characters deeper. It is limited in its ambitions, a good thing perhaps, and a little clumsy.

Ola: Yeah, it is a bit! It’s an affliction of many of the movies of that period – the special effects have aged no matter what, and the intent and idea are seemingly more important than their execution, but it still looks like a good piece of fun done by amateurs in the original meaning of the word: people who love what they do. Plus, the main villains are women, and the future Chosen One is female too – and it all happened without the fuss of today’s radical feminism 🙂

Piotrek: The movie still looks good. Sure, it’s not the latest computer-generated visual feast, but nothing to be embarrassed about. Was there a chance of creating the Star Wars of fantasy? It’s what Lucas probably wanted, but with very modest financial success, and mediocre popularity among the critics (it has a Metascore of 43%) made it impossible. Probably rightly so, I don’t think there was a need to go further with the story. Still, in our sequel-crazy times there is some talk of Willow II.

Ola: Oh no! Hope it won’t come to that. I love it, but not that much 😉 I don’t think it could have been the fantastical equivalent of Star Wars, for many different reasons – the completeness of this movie, for example. But it’s real fun while it lasts, and revisiting this movie is a truly positive experience. I think the main difference with Robin of Sherwood is that Robin for my 6-years-old self was pure magic – and Willow was never more than a joyful piece of entertainment. It’s insanely difficult to keep the magic nearly three decades on – but fun is fun, no matter what 😉 That’s why I’m more willing to compare Willow to Goonies than to Robin or E.T. – there are some experiences precious to our younger selves which are nearly impossible to repeat, and then there are some that evoke a milder type of nostalgia, with blunted edges and less emotional payload 😉 Willow for me falls into the second category.

Piotrek: Ultimately – Willow is simple, cheerful fun, a genre classic that deserves a place in canon of good fantasy movies appropriate for the younger audience. Together with Conan, and for different reasons, Willow is my favourite fantasy movie from the 80-ties.