Our first foray into the worlds of our childhoods ended with a sad conclusion that some things age badly. Today, we present you with an animated series from quarter a century ago that still delights our cynical older selves.

Also, our second DC post in a row, what’s going on??

Batman: The Animated Series originally aired from 1992 to 1995 and consisted of 85 episodes, unevenly distributed between Season One (65) and Season Two (20). This frequently awarded series is still considered one of the greatest superhero animations, and started many further animated DC Series, way before MCU.

Piotrek: In the world of animations, I had to wait till recent Spiderman to see a Marvel piece to rival this one. And it is, so far, one feature film, whereas Batman: TAS was consistently brilliant for 85 episodes!

Ola: And let’s not forget that it also paved way for some really good animated Batman movies targeted for a more mature audience – a rather rare situation in American animation industry, usually focused on kids. I can heartily recommend Batman vs. Robin from that batch, based on Snyder’s Batman: the Court of Owls storyline.

Piotrek: Batman: TAS shaped my view of Batman, as I watched it before I got my hand on any significant amount of Batman comics. I’m pretty sure I’ve seen a few episodes when they were first aired by Polish TV in 1993-95, and most of the rest during a re-run in 1997-1999. Recently, I’ve seen them all, for the first time truly appreciating the voice acting – TV in Poland doesn’t trust in its viewers reading skills and gives us voiced-over translation. Now there is also a dubbed version, but I cannot say if it’s any good – and it’s hard to come by anyway.

Ola: I distinctly remember watching some episodes back in 1993, and my impression that it was quite scary – unusually dark for an animated series back in the day 😉 Mark Hamill gave his all to the Joker impersonation, and the results were brilliant – if a tad unsettling for a kid. I remember my surprise that Luke Skywalker could sound so convincingly menacing 🙂 When I now listen to his Joker, I have an impression he enjoyed himself quite a lot!

Piotrek: This is a perfect Batman, and with 85 episodes we get to see most of his friends and enemies. Joker being the best, definitely.

I agree, it wast noir in tone, darker than your average kiddie cartoon. I was scared from time to time! The dark, minimalistic visuals combined perfectly with Shirley Walker’s score for stronger effect. Writing was also top-notch. Stories were complex, often divided into two episodes, characters complicated and interesting.

I’ve tried to re-watch X-Men last year, show I also used to love as a kid, and it just wasn’t as good. It looked dated, dialogues were, at moments, frankly, embarrassing. Newer serial animations from Marvel, like The Avengers: Earth’s Mightiest Heroes, couldn’t get my attention, it was candy-like colourful and simplistic. Batman is as good as ever. Why?

Ola: My take is that the creators made it for themselves 😉 Batman-crazed adults trying to convey their remembered youthful infatuation with the imaginary world where Gotham actually exists and virtuous Batman fights crime whatever the cost – to which they added their mature understanding of the real world, with its palette of greys and plethora of maybes.

Piotrek: Researching for this post I’ve read Harley Quinn was actually introduced on this show. That is an essential Batman character portrayed  brilliantly in many pieces of media since! That alone would be a worthy contribution to the Bat-lore.

Ola: Indeed, Harley Quinn came to be one of the most important female characters of the Batman universe – and is portrayed in a decidedly feminist light as a woman who chooses to become a super-villain and remain really professional in all her endeavors – sure, in part because of her infatuation with Joker, but mostly – because she can 😉

Piotrek: I’ve tried to think of the episodes that made the strongest impression. And the ones that stand out the most are not the ones focusing on Batman and his fight against crime, but stories told from other points of view. With the exception of Perchance to Dream, a story in which Bruce Wayne experiences an alternative world of happy family life without the tragedy that made him who he is. His (spoiler alert, but, I mean, are there any doubts?) decision to forgo it and face the hard reality shows the audience the real strength of this hero.

Almost Got ‘Im is a rare example of really well-executed anthology episode (ok, another spoiler alert, I guess if you want to avoid spoilers, go straight to the last paragraph…) with Bat’s arch-enemies each telling a story of how they almost got him. And Catwoman is also there!

I’m also a big fan of Harley and Ivy, a story in which these two supervillains team up to show they don’t need men to create havoc all over Gotham City. Joker is not amused, and this is one of the stories that explore the abusive relationship of Harley Queen and Batman’s greatest adversary.

Ola: Almost Got ‘Im was great! It had that gritty tone usually associated with mystery/thriller genre, even the poker game – all in the spirit of Detective Comics, 😉 I also enjoyed The Man Who Killed Batman episode with the memorable appearance of hapless wannabe Big Shot Sid the Squid. 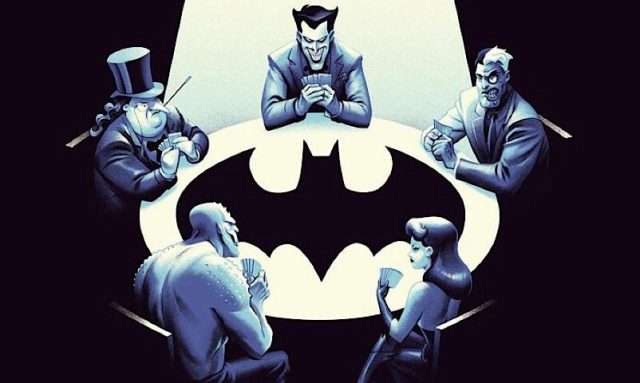 Piotrek: What more is there to be said? It’s a perfect series that needs to be watched and re-watched and that deserves to be in everyone’s animated canon. It so good it even has it’s Honest Trailer. Seven minutes guaranteed to make you wanna re-watch the series!

Ola: There’s also a feature film Batman and Harley Quinn from 2017, considered by ts creators “a spiritual successor to Batman: TAS” and indeed, it has the same quirky humor, similar style of animation and the same voice actors for Batman and Nightwing – not to mention Bruce Timm as the main screenwriter. Though it received mixed reviews, it’s still a nice tribute to the series, and hopefully a good sign of things to come 🙂 Especially that it had Swamp Thing in its cast! 😀