Where do I start? Maybe with the hype concerning Tom King as the new Wunderkid of DC Comics, one of the few authors who allegedly could take the post-Rebirth Batman and put some life into the character nearing its permanent retirement age (80 years next May!). Tom King’s approach was supposed to be ‘cerebral’, his stories realistic and full of suspense. Maybe some of them are – I am not to judge, since I’ve read only the one and I don’t intend reading any other. Because, in short, The War of Jokes and Riddles was a smelly pile of horseshit.

Let’s start with the art, because later on it will be one long rant. Art is mediocre at best, with Riddler inexplicably beefed up and Joker looking like a drawing of himself from some really bad old comics. Batman and Selina look correct if quite generic, and that’s probably the best I can say about them. The main problem I have with Janín‘s art is that it lacks dynamics, and the eyes of the characters seem dead. They make faces, all right, but nothing reaches their eyes. The panels depicting the war don’t really make much impact – they are there, and they show what happened. Maybe I’m spoiled by other artists, I tend to choose my comics carefully knowing there’s a lot of fluff and a lot of trash out there. 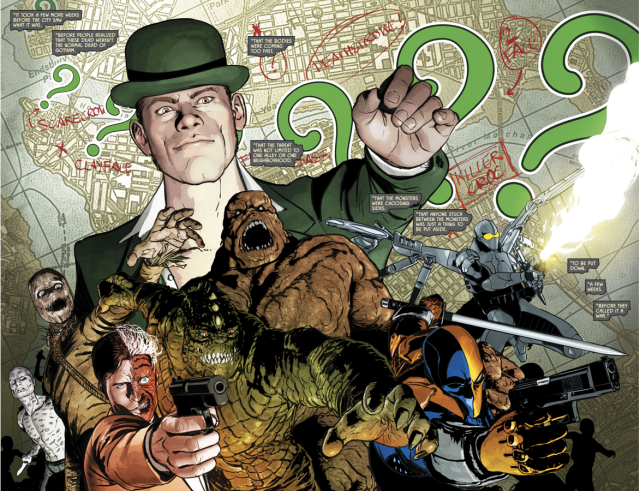 The comic is written as a frame story: the prologue and epilogue show contemporary Batman and Catwoman, while the main story is a reminiscence from the beginnings of Wayne as the Dark Knight. In the opening pages we have a half-naked Batman confessing to the equally denuded Catwoman in the dark recesses of a bedroom. They are nearing a pivotal point in their relationship, marriage (and I won’t be commenting on this particular aspect of the story, which seems quite far-fetched, at least from the psychological perspective, for both of them). Batman believes that Selina must make an informed decision, and that there’s still something about him that she doesn’t, but should, know.

A jump back in time, and we’re just past Year One (which I’d argue didn’t really happen in Rebirth anyway). Every single one of Bat’s impressive plethora of villains is already fully operational, as if fresh from a comic book shop shelves: they just all live happily together in Gotham, until… Yes, I’m sure you guessed it: Riddler and Joker go to war! The reason for the war is quite simple: both of them want to kill Batman so badly that they’re willing to kill each other before one of them takes on the Dark Knight. Logical.

Let me take a moment to torment this idea a bit further. Who in the world thought it can ever be defended? Or maybe simply King assumed people don’t really read comics, they just look at the pretty pictures. But ad rem. Psychopaths and sociopaths of our world are not illogical creatures. They operate within very logical frames of action, probably more logical than most of the people, because they’re more often less driven by emotion (except the cinematic violent outbursts here and there). In other words, the fact that they don’t adhere to ethical or moral or any kind of social rules of a society doesn’t mean that they’re batshit crazy – they form their goals in a highly logical way, and are able to map the most efficient road to achieve them. It seems to me that psychopaths and sociopaths of the DC universe operate in exactly the same way. So why in the world one of the most intelligent of Batman’s foes should come up with an idea that instead of pooling resources with Joker he should kill him to have the undivided – if very improbable, after expending all his goons and weapons to kill Joker and his entourage – pleasure of killing Batman?

But we’ve just started poking at the pile. Here’s more: Riddler devises a very complex, and very stupid plan of planting a spy in Joker’s empire. Lo and behold the Kite Man, an innocent guy forced to play a role of a down-on-the-luck villain who gets in the good graces of Joker. Of course, the best way to ensure one’s loyalty is to kill their son – that’s obvious, even for someone who isn’t a genius like Riddler. So you  kill your plant’s child to get him hellbent on revenge and garner a bit of credibility with the other side, but if you’d think a bit more strategically you’d find some holes in your plan… Who am I kidding.

That’s not all. Throughout all this, Joker isn’t himself. He stopped laughing, because with Bats around nothing’s funny anymore. Every bit of fun is spoiled by the brooding grim presence of the Dark Knight. And that’s why Riddler does all those incredibly stupid things – because he secretly wants Joker to laugh again… How very… touching. 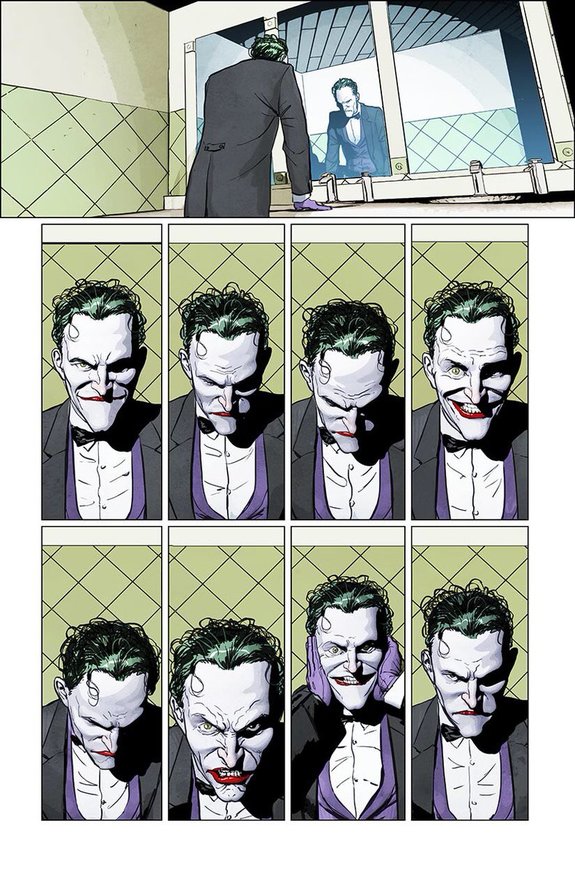 The plans within plans unfold, bringing down half of Gotham and killing off most of the villains – and the civilians as well. People are getting hurt, the sphere of no man’s land gets bigger and bigger, and Bats is very confused and lost within it all. He’s not himself, either. He allows things to happen to him without really knowing what’s going on. He’s a damsel in distress for most of the comic, passive and brooding and without a clue about the bigger picture. Even taking into account the possibility of unreliable narrator (though I think it’d be giving King too much credit) his inactivity and lack of understanding are so out of character it’s jarring. There’s no agency on Batman’s part for the majority of the 200-pages long comic. Of course, this is explained by his relative inexperience in all things psycho, socio, and Gotham – Year One, remember? And when he finally acts… Oh boy, up till that point I thought the comic was just meh. Just a regular 4/10 thing you could tear pages of and put around the jars of your pickled veggies so that they don’t break, or use in dire need when marooned in a bathroom. But King decides to break all the rules of Batman, and embroils him in a premeditated murder attempt.  You heard that right, Bats doesn’t act in affection, like, say, in Hush, this time he has it all thought through, and he doesn’t stay his hand when trying to knife Riddler. It’s Joker who stops him, and – voila – the mystery surrounding the Batman – Joker relationship is solved at last! It’s so simple – no grand morals, no ethics, no inherent difference between those two, it’s just pure simple guilt of Bats that Joker becomes an embodiment of.

And what pushes Batman to such dramatic action? You’d think that leveling half of Gotham and killing hundreds of innocent civilians would have that effect – but you’d be wrong. It’s the death of the Kite Man’s child in the war created to make Joker laugh that breaks the camel’s back for Bats. He’s as bad as the villains he catches, King tells us in his best teacher voice, he was just lucky to have Joker stop him at the right moment.

Yes, King says, Batman is as bad as the rest of them. No inherent difference, really – maybe a bit of guilt, or rather shame. Morals? Ethics? The unending struggle of trying to adhere to an internal moral code against all odds, which defined Batman for nearly 80 years, is a fake. Because apparently it takes only one immensely stupid comic book to destroy the main tenet of Batman’s lore: he may be deeply troubled and more than a little psychotic himself, he may cause half the troubles that infest Gotham like a plague, but he remains of the side of good. Sure, sometimes his definition of good may be a bit different than the norm, or the definitions of others, but there are lines he doesn’t cross. And here comes King with his smug little comic book and tries to retcon Batman into nothing better than a street thug with conscience and a funny cape. That’s  a disgrace. Because ultimately what makes Batman a hero is the fact that he acknowledges the inherent darkness within himself, and he strives to control it – not allows it to control him. There is darkness in all of us; what we do with it determines who we become.