One of the high points of the recent Witch Week was a discussion on Ursula Le Guin’s The Other Wind, the final Earthsea book. Inspired beyond our contribution to the comment section there, we decided to post this special two-shot review. Warning – there will be spoilers, there’s no point in avoiding that. This is a short novel, if you liked the previous ones, read it. If not, you will not like it, we promise… 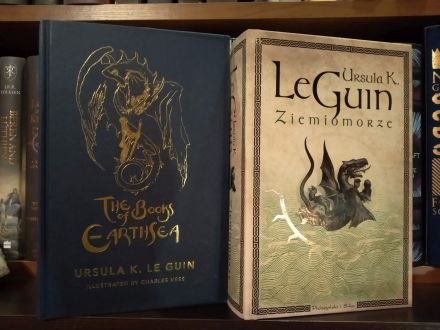 Prószyński i S-ka published one of the beautiful editions of the Earthsea, with one weak point – lack of illustrations. Saga Press (Gollancz in UK and I have this version) published the ultimate illustrated edition, with great art by Charles Vess.

Piotrek: I love Le Guin and I consider her to be one of the giants of the genre, quite close to Tolkien on my personal Olympus. I was happy to re-read the final book before the Witch Week – originally I wanted to re-read the entire cycle, but I only found time to read Wizard and this. To my astonishment I realised I’ve never read The Other Wind before! Why? It was published in 2001, Polish translation in 2003, after my last re-read of the Earthsea. Between then and now I’ve read a few of the Hainish novels, Malafrena, and some other one-shots and short stories, even her poems, but I somehow missed The Other Wind. It was a great joy to read it now, as I really find it a worthy conclusion of the cycle and a very good read in its own rights. Some of the loose ends come together, some stories end, Le Guin neatly ties up the world we revisit for the last time (in a novel format).

Ola: I’ve read The Other Wind before – but as a much younger person 😉 It defied my expectations then; not that I thought Ged’s retirement to be a punishment, as some of the readers apparently believed, according to Le Guin – but his drastic (to my 15 years younger self, at least) change of role and status – as well as the limited amount of space he took in the book – was a definite surprise. This time I see much more clearly how deftly Le Guin altered his role from the original hero to the wise man and mentor aiding a new hero on his new journey, still keeping Ged within the heroic cycle. The cyclical nature of life is, after all, one of the main themes of the novel. 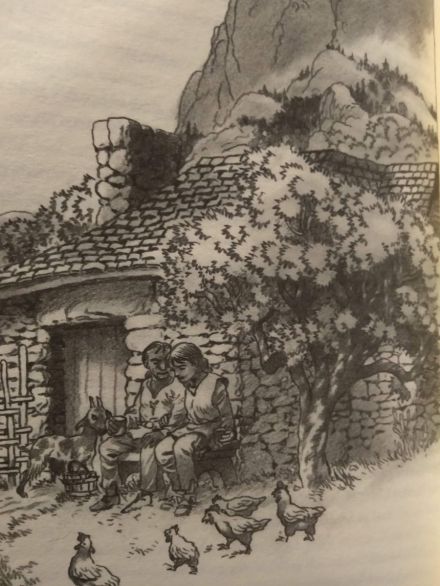 Piotrek: So, we arrive in Earthsea once more, to learn about a strange affliction of Alder, a minor sorcerer who is tormented by dreams of a barrier wall between the realms of dead and the living. At the same time, dragons begin to attack the isles of men on a scale unheard of. Alder is pointed towards Ged, now firmly retired and bereft of his magical powers. Ex-Archmage has no intentions of rejoining the game and sends him to king Lebannen. The mantle is fully in the hands of the younger generation and this acceptance of the passage of time is one of the things I like in The Other Wind. 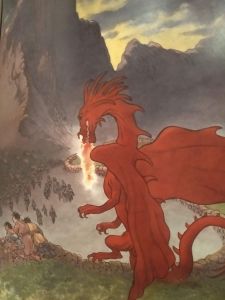 Ola: The wall between living and dead is something we’ve been seeing in Earthsea since the very beginning. This wall is the very threshold on which Ged starts his original journey. It is the threshold of Lebannen’s journey as well. It had been a constant presence, and to see it reinvented and destroyed brings a very rewarding, satisfying closure to the whole Earthsea cycle. To me the way Le Guin had revisited this concept was a wonderful example of her masterful storytelling. There is huge difference in her approach between her early Earthsea novels and the late ones – yet she manages to successfully bridge it in a way that doesn’t seem forced.

Piotrek: Another of my favourite things about the book is the way Le Guin creates strong, rule-changing female characters in the context of carefully crafted realistic pre-modern cultures. She avoids the trap of superimposing a thin layer of obviously modern liberalism on a caricature of medieval society, something that happens way too often with books trying too hard to be progressive. 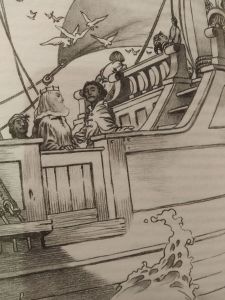 Ola: I fully agree. I think it works so well because Le Guin underscores their familial roles: of mothers, daughters, wives. Everybody has them, no matter their gender. Well, not wives, maybe, but the marriage roles of spouses are a cultural constant. So while the power of Le Guin’s females doesn’t come from the social structure per se, it comes from their personalities and the social ties and bonds they create. I think that’s the important part, enhanced by the story of Alder: it doesn’t really matter what position or status you hold, what matters is what you are and how you express it to the world – it’s a paean to activism, in a way.

Piotrek: The Other Wind is, almost exclusively, about learning why the world of Earthsea is out of balance and restoring it to escape the looming catastrophe.

Ola: I totally disagree here! The Other Wind is, almost exclusively, a story about growing up, growing into oneself – but from the rarely shown perspective of those being left behind. It’s a story about learning to let go – in more than one sense. And it’s all the more poignant for the fact that those left behind are those who we’ve learned to expect being the shakers and movers of the Earthsea. The scene of reunion of Ged and Tenar was especially heartbreaking in that aspect – we suddenly see the heroes of Earthsea as an elderly couple with an empty nest syndrome. And the actual plot of restoring the balance ties nicely with this overarching theme of loss that is not loss if we learn to accept it, for the other sense of letting go Le Guin writes about is an acceptance of death.

Piotrek: Heh, it’s been pointed out to me recently, that I don’t pay enough attention to characters and relations, and too much to politics and worldbuilding 😉

Piotrek: A question could be asked, if perhaps the message it too heavy, with not enough plot… not for me, definitely, as I feel its a natural destination for this series.

Ola: It was intriguing to see how many of Le Guin’s protagonists didn’t fit. Except for Ged and his earned reward of peace, most of the other characters in the novel feel out of place. And those that don’t – mages from Roke, for example – quickly learn that they should; that what they know might not be what is, and that their elevated position or advanced age doesn’t grant them wisdom. This feeling of incongruity which spurs to action is a common theme of The Other Wind. 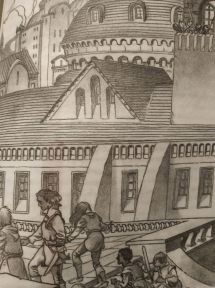 As for the message, it had its heavy moments. I am not a fan of the dichotomy between culture and nature, and here I found it quite pronounced in the way Le Guin opposed the learned mages from Roke with the hedgewizard Alder, the dragon-women, Seserakh and Tenar. By the way, I keep mentally counting Alder with women – structurally, he is with them, as a person bereft of social power and with limited capability of action, unsure of his position and forced to ask for  help of the others, yet selfless and determined to make things right even for the highest price, as well as closer to the nature end of the traditional continuum/dichotomy (that message is repeated several times, both in the stories of his mother and wife, and in the way he interacts with the world in general). So maybe it’s not about gender at all, but about the nature-culture dichotomy, those controlled and those in control – where traditionally women are position on the nature end of things… as is Ged, for that matter, who intentionally changed his place within the structure.

Piotrek: Wizards of old bear some similarities to the fallen people of Númenor, who rebelled to seek immortality. In a world without a Christian-like highest deity, the correct answer is an acceptance of the cycle of birth, death and re-birth, an acceptance of what has to be accepted that gives you freedom to pursue changes that are achievable and beneficial. I’m also against artificial and vulgar nature/science dichotomies,  but I think Le Guin, in the end, goes beyond that, after all the solution is not to return to pre-division Paradise, but to continue with human magic and technology, only within the frame of the fundamental laws of this universe.

Ola: She definitely struggles not to conform to those deeply rooted stereotypes. I’m not sure she fully succeeds. And yet, I found The Other Wind a perfect conclusion to the Earthsea cycle. It is not Wizard of Earthsea, one of my favorite fantasy books of all time, but I didn’t expect it to be. The Other Wind is from the beginning to its end a poignant finale to a beautifully woven tapestry of Earthsea and a heartfelt farewell to our favorite heroes. Plus, it hit me in quite unexpected places, inviting me to consider a few quite philosophical issues regarding the cycle of life 😉