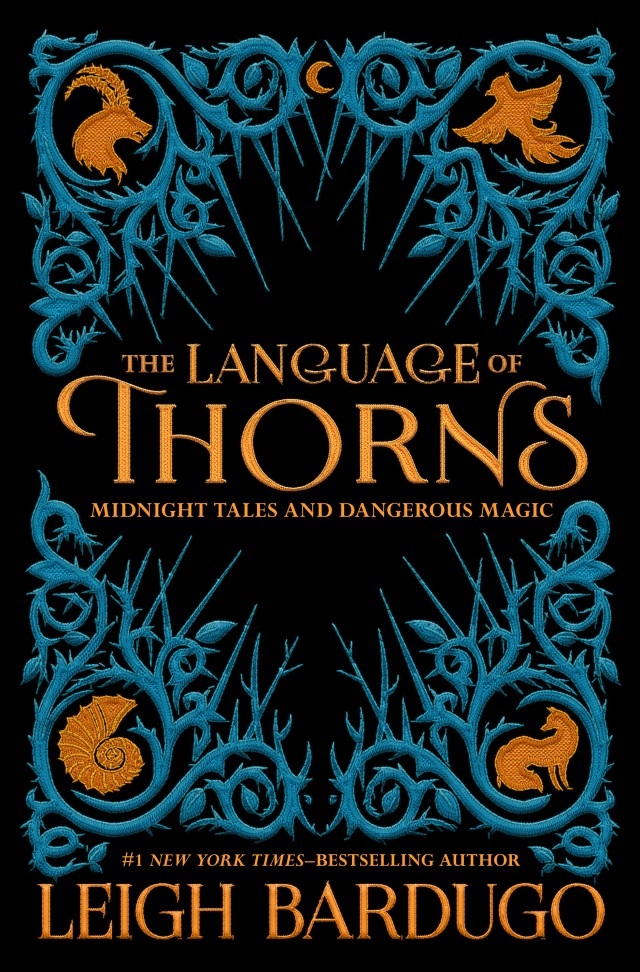 Title: The Language of Thorns: Midnight Tales and Dangerous Magic

A collection of fables set in Bardugo’s Grishaverse, The Language of Thorns first came to my attention through Trang’s review on Bookidote. As a novice to Bardugo’s writing, without any reading experience in Grishaverse, but with rather better knowledge in the areas of myth, fairy tale and fable, I can conclude that Language of Thorns is an inventive, pleasurable read, which pleases the eye as much as the mind, owing that to wonderful illustrations by Sara Kipin. Though it would certainly do better without the lengthy and slightly cheesy subtitle, I think I understand the sentiment, especially that this book is advertised to an audience slightly younger than me ;).

Six tales gathered from different parts of the Grishaverse correspond roughly with our own world’s Slavic (mostly Russian and Ukrainian, and a bit Polish too, by the sound of the names), and Nordic cultures. The only exception is the first fable, a postmodern spin on traditional Grimm’s and Perrault’s tales with an added hint of Oriental tradition of storytelling from One Thousand and One Night. Ayama and the Thorn Wood is an emancipatory tale which I’d restrain from calling feminist due to the general pervading theme of liberating the monstrous within and deconstructing the perceived monstrosity. It’s a postmodern tale with all the expected twists and turns, and even if it’s not entirely convincing, the fault might lay in the eye of beholder – after all, writing a fable in our times is a difficult task, with many hidden traps, one of the trickiest of which is the Disney-shaped mould modern stories tend to gravitate towards.

Much more interesting to me were the Slavic-themed tales, The Too-Clever Fox, Little Knife and especially The Witch of Duva, which artfully deals with the horrific aspects of the tales of Hansel and Gretel and The Red Riding Hood. I was reminded of the Altered Carbon children’s tale of Mad Mikola while reading it, and that’s actually a compliment ;). Difficult topics such as pedophilia, serial killing, or conspiracy of silence are dealt with with enviable subtlety and enough magic to sweeten but not overwhelm the harsh reality. Again, Bardugo’s stories are in no way an eye-opening revelation, but they are beautifully written, sparsely as befits a fairy tale, and yet with a distinctly poetic flair.

My favorite of the collection is by far The Soldier Prince, dealing in an entirely delicious way with so diverse material as The Nutcracker and the Mouse King, a Tale of the Steel Hedgehog (which admittedly is probably entirely obscure to non-Polish-speaking readers), several tales of Hans Christian Andersen, Collodi’s Pinocchio and the psychological meanders of individual growth, the realization of one’s own needs, emancipation, independence, becoming one’s self. It’s a wonderful, evocative story, nostalgic and exhilarating at once. The shadowy, evil Puppet Master, from whom the hero must free himself, is an archetype worth consideration, seeing as he comes up with increasing frequency in the pop culture these days. A darker twist of patricide, and voila! 😉 Bardugo’s take on this character is simplistic, but that’s entirely understandable in a tale in which he plays only a relatively minor role. Still, he was a sufficiently dangerous, threatening presence, and his final verbal exchange with our hero was a wonderful power-play with overtones of Joker from Nolan’s The Dark Knight, with many different, conflicting origin stories, each one a perfectly aimed thrust toward the opponent. I also very much enjoyed Bardugo’s rendition of the Rat King, who in himself is a character worth reflecting upon and a stuff from our collective nightmares.

In all honesty, the least enchanting of all the tales was for me the final one: When Water Sang Fire. The Disney-shaped trap closed around this one with steel teeth, and there isn’t much I can say in defense of this tale. It started out well enough, but later on dissolved into a very average Maleficent-like rendition of the childhood of another Disney female villain. Greed and betrayal, and ambition, and of course an inevitable modern addition of a manipulative male insinuating himself into a strong female friendship to crash it all in the end…

I’m not a big fan of the origin stories, with the distinct exception of Wolverine: Origin, one of the best comic books there are (the review of which will finally come to this blog, I promise ;)). It is extremely difficult to create a convincing, realistic, logical explanation to the convoluted mystery of the Gordian knot of one’s self, the unique context of their being in a specific time and place, the thousands of small influences and impacts of their environment, their social surroundings. etc. In most cases, it is made even more difficult by the simple fact that every member of the audience familiar with the character has already been envisioning the character’s past in minute detail – and each version is different. And sometimes, some stories are better not told, or else their protagonists lose the mysterious allure, the secret separating them from mundane. I believe that’s what happened to Hannibal Lecter in the movies.

So all in all, When Water Sang Fire was a letdown, despite all the beautiful imagery and intriguing worldbuilding. I much prefer Sapkowski’s take on mermaids and on Andersen’s Little mermaid. Come to think of it, I much prefer original Andersen’s story, full of poignant sorrow and the unnamed longing for the world to be a different place – or for ourselves to be different than we are in this world.

And yet, despite this underwhelming conclusion, Bardugo’s collection of stories The Language of Thorns is a well-written modern take on fairy tales, undertaken with a visible respect for the foundations and a deep understanding of the source material. Sometimes the internal logic of the tale fails, a false note here and there can be easily detected, but the experience of reading The Language of Thorns remains a truly pleasurable one, especially because each tale is also beautifully illustrated, the embellishments different on every page and all together creating a compelling story corresponding to the text.

14 thoughts on “Leigh Bardugo, The Language of Thorns: Midnight Tales and Dangerous Magic (2017)”