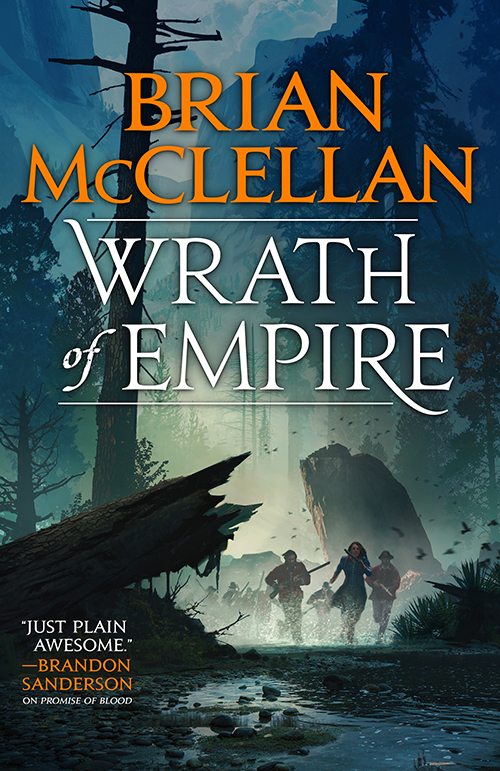 A sequel to Sins of Empire, Wrath of Empire picks up where Sins ended. General Vlora Flint leads her Riflejacks turned mercenary army away from Landfall in a doomed effort of protecting refugees. I say “doomed”, because two Dynize armies literally race each other to finish her off more quickly and efficiently, and a Fatrastan army on the other side of the river wants her imprisoned and tried for treason. Mad Ben Styke accompanies Vlora with his own unit, reborn from the ashes of old Mad Lancers, and ponders the difficult dilemmas of vengeance, while Michel Brevis, still in his role as a Gold Rose Blackhat, smuggles families of other Blackhat members from the occupied capital city. Sounds tough, but that’s only the beginning: they all will soon face even greater dangers and more impossible tasks, because, as usual in McClellan’s books, the neck-breaking pace of action doesn’t relent for even a moment.

Wrath of Empire can be described as an impressive string of pitched battles, deadly ambushes and duels, balanced with a huge amount of politics, internal struggles of various factions, torture, and betrayal. I’d go as far as to say that the military part of the book is the lighter one. The dark, underground maze beneath Landfall, in which insurgent/terrorist cells of Fatrastan Blackhats are hiding and from which they plot bombings and assassinations, is an apt metaphor of McClellan’s vision of politics. It’s as off-putting as it’s dangerous, and yet it remains an integral part of the life of the city above, connected to it through various hidden tunnels and cellars. McClellan seems to maintain a romantic view of war, full of heroic acts of selfless bravery and beautiful cavalry charges, miraculous deliverances in the last second and improbably lucky coincidences. In contrast, there is nothing romantic in the image of political struggle he paints in the Wrath of Empire, where even heroic, selfless deeds are met with suspicion, allegiances change with the speed of light, while the final goal seems at best unattainable and at worst non-existent. Yet more than the pitched battles I enjoyed the descriptions of  tangled politics of the Dynize occupying force, and really appreciated the complexity of the Dynize image, who weren’t portrayed as universally bad guys. Having Michel operate in the midst of the occupying force served very well as an opportunity to show all shades of personalities also among the notional enemy.

I’ve said it before, and I can repeat it here with clear conscience: McClellan’s skill at worldbuilding is enviable both in its ambitious scope as well as in its attention to detail. Various parts of Fatrasta seem believable and realistic, from the rich, inhabited lowlands near the sea, defended by forts, to the empty mountain ranges with their difficult paths and impassable crags, and gold mines, evoking the atmosphere of Wild West. At the same time, the evolution of characters remains something of a problem. Although the identity crisis and psychological growth of Mad Ben Styke – and especially Michel Brevis, the spy with moral spine, is executed subtly enough, Vlora’s maturing is surprisingly heavy-handed. I guess that’s what happens when the author creates too-powerful characters – there simply is no room for them to grow if they already are near-indestructible. That particular problem had been quite apparent in several instances, I must admit, and the overall experience was decidedly jarring: there was a scene in which the characters turned into something taken straight out of a rigged computer game, scything through the ranks of enemies like one-man armies, unstoppable and ultimately as interesting as the description of grass being mowed. There was also another lengthy sequence when a too-powerful character had to be temporarily removed from the scene, and that removal ended up being terribly awkward and out of character (pun intended), to say the least.

As with many second installments in trilogies, Wrath of Empire serves mainly as a vehicle to raise the stakes and prepare the stage for the final act. Not much is explained in relation to the process of god-making, except that it requires staggering amounts of blood, and for the occupying Dynize force the hapless Fatrastan citizens come in surprisingly handy. The god-stones turn out to be a rather worn trope of several unwieldy magical “black boxes” which need to be gathered together in order to work, but are – surprise, surprise – almost impossible to destroy. Suspiciously similar to McGuffin, at least in those first two installments. And in general, the sequel to Sins of Empire seems generously sprinkled with old, used tropes, from the most used of them all: the Chosen One, with an extra includes a descent from a ruling family and a terrible secret from the past, through a brute with a sensitive soul, a spy with moral qualms, all the way to the old evil Vizier plotting his own terrible plots behind the façade of political responsibility and raison d’etat.

Yet the newest McClellan’s book is a highly enjoyable, suspenseful and gripping novel. Fun and full of unstoppable action, intent on broadening the boundaries of the new realm, and developing a handful of intriguing characters, from Ben Stykes, who remains my favorite, through Orz, a mysterious dragonman-assassin with his own goals, to Yaret, the kind Dynize minister who invites Michel to his household, and to Burt, a respectable frontier businessman with Kressian education. Despite numerous holes in the plot, patched up either with far-fetched scenarios or outright use of the Deus ex Machina device, and multiple worn tropes, Wrath of Empire is exactly what it wants to be: a light, entertaining read, quite skillfully preparing the scene for the final showdown. For obvious reasons the Gods of Blood and Powder series won’t be as original or ambitious as the Gunpowder Mage trilogy, and yet I’ll be waiting to read the final installment as soon as it’s available.