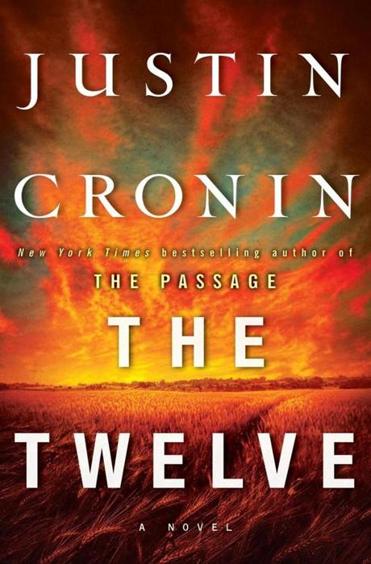 I haven’t written in a long time – lots and lots of work. Still, I do read, even if swamped with work, so my list of books to be reviewed slowly grows. I completed my read of The Twelve when I was still commuting weekly to Warsaw and had a lot of time to read, and it was a good thing, because otherwise I wouldn’t have finished this book.

But let’s start from the beginning. The Twelve is the second installment in an already finished post-apocalyptic trilogy by Justin Cronin. The review for the first installment, The Passage, can be found here. I enjoyed The Passage quite a bit, enough to jump to the second book as soon as I finished the first. I liked the protagonists of the first novel: mostly Amy and Wolgast, but I was ok also with the latecomers – Peter and Alice, Sarah and Mike, and the rest of the supporting crew.

The second installment shows us a world in a momentary stasis – the first of the Twelve, Babcock, is dead, but the rest of the monstrous serial killer death row inmates is still free to roam the realm of the erstwhile U.S. Worse, the human survivors are not enticed to believe Peter and the rest of his crew that there are other “nodes”, the remaining zero-patients, who are able to control to bloodsucking monstrosities called virals. From the humanity’s point of view getting rid of them would mean much better chance of survival – but humanity has a tendency to look rather to the next day than to the next year, and so the problems of plumbing, food and electricity shortages, and fuel transportation will always be pushed to the fore.

Peter and Alice are vocal enough and important enough to get their stab at another of the Twelve, but after they botch the job (and I’ll leave the details out for those interested in reading the actual novel even after my review ;)) they are sent in different directions, each with their own task. Peter is dispatched to play a glorified security detail to oil transports, and Alice… Well, her mission has a more sinister outlook from the very beginning. But soon enough all the paths start to converge, and it’s exactly where the novel begins to spiral downward faster than any viral.

All of the protagonists known from The Passage independently – and very conveniently – arrive at the same place and almost at the same time. There’s a very mysterious and heavily guarded city somewhere in Iowa, which turns out to be a working camp, created and controlled by enhanced humans. And lo and behold, the missing persons from The Passage are found there, sound and safe, taken there by vampires controlled by someone other than the Twelve. Moreover, by an incredibly (and completely unbelievable) lucky circumstance, all the remaining Twelve are coming to the same spot at the same time, thus making it so much easier to wipe them out.

That’s more or less the gist of the book. Usually I try to describe the content of a reviewed book in a manner as spoiler-free as possible. Why am I so deliberately frank about the plot of The Twelve then? Because it simply doesn’t matter! It’s improbable, unbelievable, and so far-fetched that it throws the reader right out of the plot. When it comes to realism, or even the internal logic factor, The Twelve could have introduced a band of small green goblins cavorting over the rainbow and throwing fists of golden coins and butterflies – nothing could hurt it more than Cronin’s blatant disregard for the plot’s coherence.

This time around the plot seems to serve only as a convenient vehicle for the beliefs of the author. The Biblical allegories and allusions abound, not at all subtle – from excerpts from religious writings about the past events, through prophets and Gods, right up to a crucifixion. But more on this later. Cronin plays here with the idea of a “familiar” of a vampire – a concept we’ve already seen in The Passage, albeit only for a short period of time. It is a nifty idea, and can be used to create some nice turns and twists in the plot. And in The Twelve there are a few cool ideas, even if a tad illogical when seen in the broader scheme of things – especially when you consider the worldbuilding laid out in The Passage. What is problematic, however, is Cronin making a full circle and starting once more from the beginning. Instead of taking the story from the first installment further along, he spends about half of the book rehashing the apocalypse from its very first moments, and even a bit before. He does that by throwing in a bunch of characters completely new and alien to the reader, and through their eyes shows once again the events depicted in the first two-thirds of The Passage. It could have been cool if the readers were able to relate to the new characters, or if the new perspective rendered some new insights into what is already quite well known – however, it is not the case. Instead, it makes the first half of The Twelve nauseously repetitive and, frankly, boring. The second half… Well, if Cronin stuck to the vampiric lore in a post-apocalyptic setting, the book would still have a fighting chance at being ok. But when he tries to create an anti-utopia based on barely understood concepts of gulags, he fails miserably. Ambitions to say something important about human conditions are laudable, but you need to match them with skill. If you don’t have it, the end result is a cardboard camp populated with crudely made puppets emitting nonsensical noise.

I wrote a whole review without once mentioning Amy, the main character from The Passage. There is a reason for it – Amy is almost  nonexistent for the three quarters of the novel. The wonderchild, the humanity’s last hope for defeating virals, joins a nunnery and bids her days there, until a mysterious summoning from a long acquaintance puts her into motion. At over a hundred years old, she still is completely passive, without one independent thought or action. Imprisoned in a body of a 12-year-old girl, she is an object of male desire, and – what’s worse – this budding romance is clearly something the readers are expected to endorse. In general, though, Cronin’s treatment of women is awful. The only independent female in the novel, Alice, is punished for her autonomy and agency in the only way conceivable for such thinking – repeated rape and beatings. The only three other females of any notice (one of them – of all the people in the U.S. – is Lila, Wolgast’s former wife! Talk about coincidence) are so stereotypical that reading about them hurts. Just hurts. The male characters are not much better, and the most likeable protagonist of all is a magical horse. That’s how bad this novel is.

What was still salvageable, after all the stereotypes, improbablities and bad writing, was killed by the religious outlook. If you want to write a novel about your vision of God and the world, go ahead – write it. But don’t dress it up as a post-apocalyptic vampire thriller, for gods’ sakes! That’s cheating.

After a really decent book this one was a huge letdown. Not recommended.