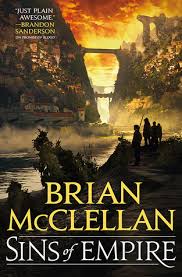 A sequel of sorts to the critically acclaimed Powder Mage trilogy, Sins of Empire takes us ten years forward and half a world away from Adro, to the newly created country and nation of Fatrasta. When Taniel Two-Shot more than a decade ago helped the Fatrastans win their independence from the Kez, he fought alongside Old-World Kressians and aboriginal Palos. But now, as the nation of Fatrasta has become increasingly rich and influential, its leaders and Kressian elites have started to mercilessly exploit the weaknesses of Palo. The internal inequalities and segregation policies introduced by Kressians pushed the mutual distrust between the former colonialists from all over the Nine and the aboriginal tribes of Palos toward political unrest and a bloody civil war. And when the empire of Dynize, remaining in self-imposed isolationism for the last four hundred years, comes knocking with a big-ass fleet of war ships and an army bloodied earlier in  a cruel civil war, things get even more dire pretty soon.

The worldbuilding in Sins of Empire is as usual very detailed and thought through. Fatrasta is clearly an alternate take of the North American continent shortly after the United States won the independence. The relations between Native Americans and European colonists are taking a different turn here, much as in Robin Hobb’s Soldier’s Son Trilogy or Abercrombie’s Red Country. This time the emphasis is put on politics, both internal and external, and McClellan does surprisingly well in not over-explaining it all, allowing the action to sort through the murky details. It definitely helps that we know many of the protagonists. Let’s start with Lady Vlora Flint, the general of the mercenary company Riflejacks. The nation of Fatrasta, ruled by the iron hand of Lindet, has more than enough money to hire Adran best and most adventurous soldiers – with Olem and Vlora at their lead – to squash the inconvenient Palo uprisings. What seems like a straightforward task gets complicated very soon, with the arrival of lethal warriors – dragonmen straight from Dynize myths – and strange obelisks whispering in your head. But only after the Riflejacks are recalled to the capital of Fatrasta, Landfall, and thrown into the midst of conflicted, muddled politics, suddenly their commission becomes much more convoluted and complex, leading them to question their own choice of sides.

We also meet some other old friends along the way, and some new characters as well. The most interesting of them is by far Mad Ben Styke, the colonel of Mad Lancers, an elite cavalry unit instrumental in winning the Fatrastan independence from Kez. A character bigger than life in more than just one dimension, Styke has a colorful past – mostly painted in shades of red. And it seems that this color will be his close companion for the remainder of the series. Styke is a well-written, multi-dimensional character, and McClellan justly allows him a lot of space. But Michel Brevis, a quart-Palo spy for the infamous Blackhats, Fatrastan secret police, is a close second to Styke. Conflicted, seemingly cowardly and fully committed to one aim in life – a promotion within the ranks of Blackhats to the coveted position of Golden Rose, Brevis is more than he seems. I also very much enjoyed the character of Vallencian, even though his personality had been sketched only in broadest of strokes. Still, he is a fun character, giving some much needed comical relief to the rather grim story.

If I were to point out a weakness in relation to characters, this time it would unfortunately involve those same protagonists who were the core of The Powder Mage Trilogy. I won’t name any names here – except for Vlora :P, as naming them would constitute a big spoiler – although once you start reading, the surprise is rather predictable and expected. All in all, I had a distinct impression that McClellan relied too much on the characters’ strength built in the previous books, and in the Sins of Empire didn’t give them room to develop, in fact freezing their personalities in time and presenting them just as they were at the end of The Autumn Republic. As I already had certain qualms about the psychological realism of the characters in The Powder Mage Trilogy, that is an even more serious flaw in Sins of Empire. Not to mention the biggest absence of Sins of Empire – I really badly missed Tamas 😉 Mad Ben Styke won’t fill the hole left by Tamas anytime soon, and there’s nobody else who could even try.

McClellan continues to enrich his world with details, this time directing his attention to the different systems of magic – the Else manipulated by the Privileged, the gunpowder magic, and the blood magic wielded by Dynize bone-eyes. The whole concept of his new trilogy, titled aptly Gods of Blood and Powder, revolves around the idea of making the gods – but as of the end of the first installment, Sins of Empire, we only know bits and pieces of the process, so I won’t delve into much detail here. In general, this concept reminded me a lot of recently read Bennett’s City of Stairs, which took off most of the sheen of originality McClellan intended. Still, as an idea, it is yet to gain real popularity within the broader genre, and it’s still something I really enjoy reading about. I missed the novelty of gunpowder magic – its descriptions were one of the strongest points of The Powder Mage trilogy – but the fights and battles of Sins of Empire were nonetheless well depicted and a pleasure to read. And, as usual in McClellan’s books, there’s a lot of action, from prison escapes through duels, assassination attempts, extractions, to cavalry charges, city bombardment, sea battles and audacious heists. And did I mention maps? 🙂 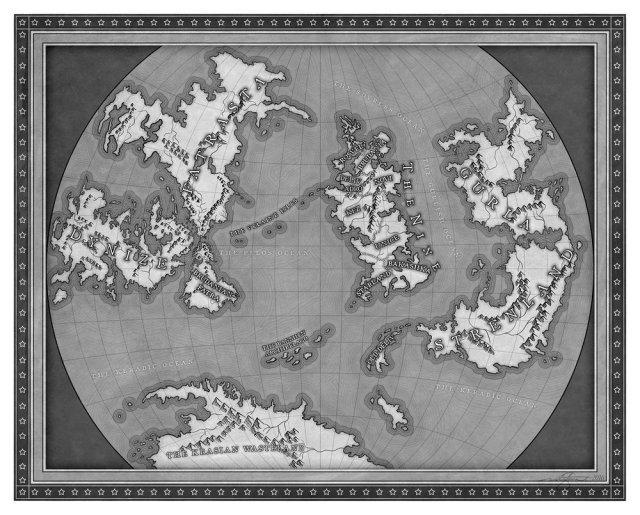 Sins of Empire is a solid read, fun and fast and not too heavy – perfect for summer lazy days. The prose flows, the dialogues are better, and McClellan clearly keeps his good form, allowing the readers to once more immerse themselves in the world of gunpowder magic, gods walking the earth and battles set according to rules of XIXth century warfare. I hope that McClellan doesn’t plan to introduce tanks – but a few zeppelins would be quite welcome :).