Tor.com has its Space Opera Week now, and it’s going to add quite a few items to my To-Be-Read pile, especially since Space Operas tend to be multi-volume endeavours. It renewed my interest in the Vorkosigan Saga by  Lois McMaster Bujold, one of THE great genre series that are still waiting for me, and put The Uplift by David Brin on my radar, and also reminded me that I have first two omnibuses of Saga waiting on my shelves (I wanted to wait till it’s all finished, but it’s very tempting to start right now…).

My decision to start David Drake’s Republic of Cinnabar Navy series had nothing to do with it, volume one was what I got for my monthly Audible credit this April, volume two I listen to right now, and I believe it to be an excellent example of this particular subgenre, with all its vices and virtues. 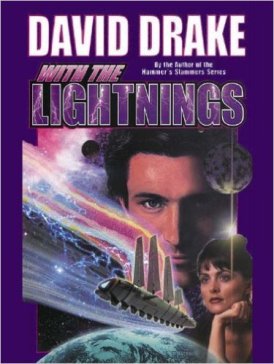 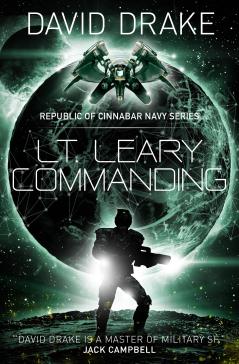 Also, a rare example of American covers being superior, the oldschool ones are original Baen, the shitty ones – relatively recent Titan version. Luckily, Audible.co.uk chose Baen for audiobooks.

Daniel Leary is a lieutenant in the Republic of Cinnabar Navy with no money and no prospects since he quarrelled with his ruthless, politically powerful father.

Adele Mundy is a scholar with no money and no prospects since her family was massacred for conspiring against the Government of Cinnabar.

Kostroma is a wealthy planet which depends on diplomacy to stay independent in a galaxy whose two great powers, Cinnabar and the Alliance, battle for supremacy.

In a few hours, diplomacy is going to fail Kostroma. Daniel, Adele, and the scratch crew they gather aren’t much to stand in the way of a powerful invasion Sleet, but just possibly they’re enough.

Men and women who hold courage cheap and honor more dear than life itself face impossible odds in a novel of color, intrigue and slashing action. From the corridors of a treason-ridden palace through the perils of unknown seas and hellish jungles to a final blazing climax in space, the heroes never bow and the action never flags.

They have nothing on their side but each other and heaven help whatever tries to stand in their way!

This is an official blurb, and it’s spot-on. We are to go on a series of space adventures with a duo of contrasting protagonists in an universe closely based on selected historical societies. Stated goal of the author, expressed in his introduction to the fist book, is to create a space version of Aubrey and Maturin. Not an easy task, O’Brian might be a genre author (albeit of a different genre) but his a master, as close to Austen as he is to Forester. Some 4chan’s lit board members (it’s a delightful place! don’t wonder off to some of the other boards, though…) might say things like essential recently-retired-dad-core (and ain’t that a sweet expression?), but I’d use it for the likes of Clancy, O’Brian knows is more than that.

Drake is not anywhere close to Austen, and not in the same league as O’Brian. That being said, I don’t see the roots of the evil that spoiled Honorverse for me. Author’s politics are not shoved down readers’ throats, protagonists might be generally more likeable than adversaries, but it’s not good versus evil. And while great many things remind us of the Royal Navy and XVIIIth centiry British politics, even more of the inspiration comes form Roman Republic with its nepotism, patronage and imperialism. The opposing political parties main protagonists’ families belong to are optimati and populares rather then Whigs and Tories.

It doesn’t have the scope of Weber’s Honorverse, and its grand space battles, it’s quintessential space opera, and not military sci-fi. Drake offers adventure, dashing officers, intrigue, but rather shallow characters and not too original worldbuilding. I’m not sure he could keep me interested if I had to read it page after page, as something told by an able narrator (Victor Bevine) it’s engaging enough, slightly guilty, pleasure.

Halfway into the second instalment I might not be doing him justice. I have a feeling though, that it will be consistent and that I will not be disappointed later on, if partially due to lowered expectations. If anything changes in my opinion on the series, I’d get back to it here.

O’Brian’s heroes made me feel I got into the minds of very real people from the past. Drake does not have the gift of making his worlds seem alive, but he can write a good action story. It’s way better than to aim too high and miss.