Seveneves is a critically acclaimed, almost seven hundred pages long science fiction novel, with solid two-thirds of it being trademark Stephenson hard sf. It has been shortlisted for 2016 Hugo award and is currently being adapted to film by the Apollo 13 filming team. It starts in an ideal Hitchcock fashion: with an earthquake, followed by an ever rising tension.  Imagine yourself, right about now, looking up at the starry – or blue, depending on your current location on Earth – sky. Imagine looking at the Moon, its white, pocked face benevolently gazing down on you. Imagine that you close your eyes for a fraction of second, and when you open them again, the Moon is no more. There is a huge, hazy cloud instead, growing with an alarming speed.

That’s the opening earthquake of Stephenson’s Seveneves. An Agent, an unexplained force, tears the Moon apart into seven huge chunks (and myriads smaller, which quickly turn into cosmic dust or else fall down on Earth as meteors, killing a few unlucky chaps along the way). The big lumps keep in orbit, at first – they are given cute names, like Scoop, Kidney Bean and Mr. Spinny, and are being observed by all as the sensation of the season – but then they begin to collide with each other. What happens next? Well, there is good news and bad news.

The good news is that the Earth is one day going to have a beautiful system of rings, just like Saturn.

The bad news is that it will take somewhere between five thousand and ten thousand years. In the meantime the entire surface of Earth will be boiled by the Hard Rain, a meteorite bombardment setting aflame the planet’s atmosphere and irrevocably destroying all life on it. The only way the humanity can survive is either in space or deep underground. Provided, of course, that people can assure their survival in these hostile environments for at least five thousand years.

From this moment on we track the fates of several main characters, changing POVs and locations, from Alaskan mines to Greater Los Angeles and the White House, to Izzy, the International Space Station enlarged by a big iron meteorite up front. We see the humanity’s final days, the efforts directed at ensuring the species’ survival as well as coming to terms with one’s untimely death – but this time on a really global scale.

That sounds fun or what? Definitely sounded great to me 🙂

So I tucked into the book, not deterred by the rather (if I’m generous) mediocre characterization and overabundance of technical slang turning up here in there in the justly hated form of infodumps. Stephenson only makes the broadest of sketches of the humanity’s reaction to the big, literally Earth-shattering events; his prose is clinical and detached, but this approach can be easily justified by the fact that as the action progresses, more and more of it takes place on Izzy, in space – in other words, as far from Earth as humanly possible. I can afford to be brutally frank here: the psychological development of the novel’s characters utterly fails; to be precise, it is simply nonexistent. And yet, the book still can be – and, at least in its first two-thirds is – riveting and utterly fascinating due to the author’s detailed, mathematically probable, and realistic description of actual events. The White Sky, the Hard Rain, the against-all-odds fight of the space station crew for the humanity’s survival – everything is thoroughly researched and very realistic, taking into account the current state of knowledge and technology.

It was great. I thoroughly enjoyed every part of it, from the heroic, ill-fated Ymir expedition to the building of arklets, the ingenious ideas of bolos, nanorobots and robotic chains in zero-g, all the way to escaping the Earth’s gravity well and, finally, the Cleft. Pure nerdy joy. I could even forget most of the wrongs, the cardboard characters, the illogical choices, the derivative, incongruent political plots, a la Battlestar Galactica season two (and that’s not a compliment), the obvious usage of Deus ex Machina à rebours (as in: let’s stir the pot a bit and throw in a few incendiaries, because it’s going too well; a few more gruesome deaths seem necessary at this point and I don’t really care how plausible is this solution… That’s what the audience wants.) Oh well, I could not forgive all of the wrongs, as you can see ;). But many of them. Really.

And then… the last third began. My early warning system started beeping at the end of part two. There was this queer discussion among Seven Eves, where all the weak points of Stephenson’s writing came to the fore. Characterization. Illogical choices. Total disregard for human psychology and biology. Some very strange ideas about race and social divisions. A seriously alarming view on eugenics. And because I do not want to reveal too much, I won’t explain this bit at all. Just read it :P.

Anyway, fast forward five thousand years. That’s not a spoiler, that’s just reading the table of contents ;). Five thousand years in the future, something like humanity still exists. They even still speak something very similar to modern-day English – Anglisky, because obviously the only language capable of influencing English would be Russian.

Okay, I can’t hold it any longer. Hello? Anybody home? Time travel sounds great, but… Have you ever realized, Mr. Stephenson, that we are actually almost thirty years after the end of the Cold War? Have you ever checked what languages are the most commonly used these days? Heck, have you even read the first two-thirds of your novel? If not, I’ll give you a hint. There is one (1, if you’re mathematically inclined) Russian alive at the end of it. And that Russian speaks a very good English.

But the Cold War remnants (yes, more than one) are the least of my problems with the final part of Seveneves. Stephenson’s idea of distinct human races, his ideas of applied eugenics, of the workings of social structures, or even simple, biological evolution – they are all either seriously wrong or so badly botched that I don’t even know where to start. And I cannot say much about them lest I completely spoil the book for those who haven’t read it. So let me phrase my grievances this way: whereas the first two-thirds of the novel are a serious, scientifically-backed, deliciously hard SF, the final third goes off the rails into the realms beyond fiction, even beyond fantasy. It is internally incongruent, illogical and written by someone who had not thoroughly researched nor expressed serious interest in human behavioral patterns, human biology, psychology, evolution or social life. In short: WTF?!!

I devoured the first two-thirds of Seveneves. I tarried with the final third for a really long time. I found it boring, unrealistic, at times completely childish and, frankly, rather alarming in the department of the social views expressed by the author. Even in that part, however, were some pretty interesting technological/scientific ideas – from the habitat ring, through gliders, the ways of getting from the surface of the Earth to orbit, and to the Cradle itself… 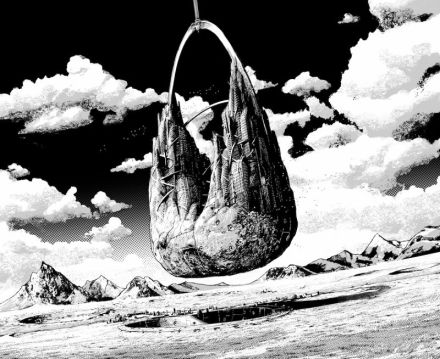 Even the idea of the severance of the continuity of one’s identity was intriguing, albeit not entirely scientifically plausible. At least not without some serious side effects and… But I won’t go into details. It’s a great premise for a long discussion, but for some other day.

All in all, the final part is a disappointing addition to the first two, at least for me. Some reviewers prefer the latter, admittedly much lighter piece to the heavy, scientific parts one and two. For those inclined like me more toward hard sf, the fortunate okoliczność is that the final third reads like a separate novel from the first two-thirds. If you don’t want to read it, you don’t have to.