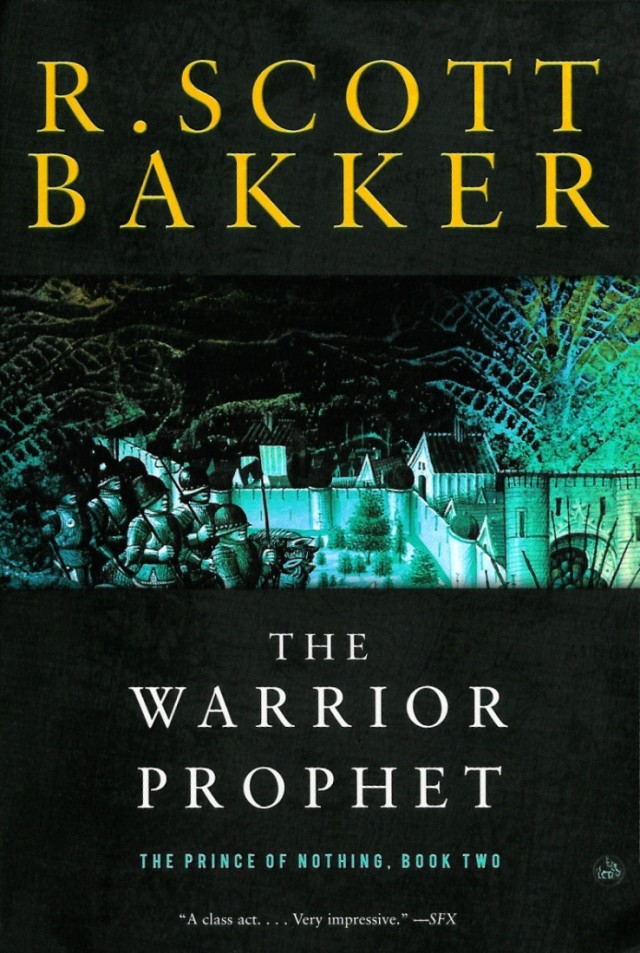 The Warrior Prophet is the second installment in Bakker’s well-known trilogy Prince of Nothing. The first book, The Darkness That Comes Before, brought about an intriguing world, closely mirroring early medieval Europe, particularly the First Crusade, but also imbued with many-flavored, dangerous magic as well as with a secret knowledge of a past Apocalypse.

The first installment, despite its numerous flaws detailed in my earlier review, had been promising enough to lure me into reading the second book. The first book in any trilogy is an opening. A statement, a brag, an invitation. It shouts loudly and clearly the intentions and ambitions of an author, but it is also, maybe even mainly, a promise. A promise of what will come after – after the game is set, the figures introduced and prepared for action, and the beginnings of all the plot strands are woven. It’s also a promise of getting ever better. The second book should fulfill that promise, leaving the readers yearning for more, waiting for a satisfying, all-encompassing conclusion of part three (at least in case of trilogy). Does The Warrior Prophet deliver on that promise?

Here’s where the fun starts. Because in this case, the answer is both yes and no. The Warrior Prophet is in many aspects just more of the same. But in this case, it’s NOT a good thing. More of the same elaborate, dry language. More of the same casual sexism. More of the same idolatry of Kellhus. More of the same gratuitous, sometimes revolting, and more often than not sadistically graphic, sex. And yet, there are moments when Bakker’s prose soars, together with his imagination. The battle on the desert sands. The description of a magic fight, between an adept of Gnosis and members of a lesser magic order:

And he sang his song with a beast’s blind fury, parting wall from foundation, blowing ceiling into sky, as though the works of man were things of sand. […] And he laughed more mad words, drunk with destruction. Fiery lights shivered across his defences and he turned, seething with dark crackling humour, and spoke to the two Scarlet Magi who assailed him, uttered intimate truths, fatal Abstractions, and the world about them was wracked to the pith. He clawed away their flimsy Anagogic defences, raised them from the ruin like shrieking dolls, and dashed them against bone-breaking stone.

There’s also a grimly beautiful account of an army, or rather a handful of individual hosts, conquering a fallen city. Generally, Bakker has a gift for writing battle scenes, be they big as an army assault or small, like a duel between Cnaiür and Sarcellus. But his literary talent shines through even in very personal, intimate scenes, such as this description of reading:

A book was never “read”. Here, as elsewhere, language betrayed the true nature of the activity. To say that a book was read was to make the same mistake as the gambler who crowed about winning as though he’d take it by force. To toss the number-sticks was to seize a moment of helplessness, nothing more. But to open a book was by far the more profound gamble. To open a book was not only to seize a moment of helplessness, not only to relinquish a jealous handful of heartbeats to the unpredictable mark of another man’s quill, it was to allow oneself to be written. For what was a book if not a long consecutive surrender to the movements of another’s soul?

There are moments of beauty in this book – but they are rare, sparsely, almost jealously rationed about. And the rest is… a huge disappointment.

Since book one I expected Prince of Nothing sequence to lead in one direction. The religious leitmotif of a Second Apocalypse in a religious setting of early Middle Ages, when Christianity warred with Islam, coupled with a mysterious appearance of a certain thin, blond-bearded, bright-eyed individual with super powers and a penchant for bending the thoughts of others with words… There is a pattern there. And, sadly, I wasn’t wrong.

I can name the main problem of this book very quickly, with one word: Kellhus. Not even the sexism, although it was even more evident than in the first book. Not even the gratuitous, sadistic, disgusting sex scenes, filling the pages to the brim and filling me with some serious questions about Bakker’s mental health. It is Kellhus, the ambiguous, super-powered character, who in the first installment merged the traits of a hero with those of a villain. I was fed up with him even then. Here… Words fail me to describe the unbearable Mary-Sue-ness of the titular Prince of Nothing. He can do everything, everyone loves him, and those who don’t are either already dead, wicked beyond compare, or are forced to not loving him by rather illogical plot resolutions – only to make the final payoff bigger. He is the center of the Universe. Even characters who in the previous installment possessed a modicum of intellect or free will here become only his agents or a colorful background on which our special snowflake might shine all the brighter. One reviewer used the description “brain-dead”. It’s very apt. Even the main protagonists of the Darkness…, Achamian, Cnaiür, Xinemus, Proyas, Esmenet, not to mention the cringe-inducing sex doll Serwë, who was brain-dead before, everyone becomes a mindless, empty husk in the presence of Kellhus. What’s even worse, he’s no longer ambiguous. He’s the outright savior of humanity, seeing what others cannot, fighting as others cannot, thinking as others cannot.

What irritated me to the core is not the simple fact that Bakker tried to recreate Christ. It’s the fact that in order to do so he endowed his rendering of Christ with some freaking super powers. He writes about belief, but doesn’t understand it. Terry Pratchett in Small Gods had shown the process of attaining, or losing, godhood in his own, unparalleled way, striking to the core – as did the Monty Python group in Life of Brian. It’s not about an individual’s super powers. It’s about the belief of the group surrounding that individual. Godhood, like charisma, is a social relation. And showing that – that would be a real challenge.

Yes, I realize this is only the second installment. Sure, by the third book it may still all change, in a final, insanely intricate twist of genius. But somehow, I doubt it. Bakker has become so enamored with his own creation that my reading experience turned into something very painful and, at times, entirely repulsive. As in: WTF are you even writing, man?! Even the rare instances of literary beauty couldn’t repay all the moments of dismay and disgust.

Illogical and flat don’t even begin to cover the problems with the plot. If all you do is gush over your main character, your story begins to have holes even bigger than Kellhus’s head. Some characters get very conveniently abducted and tortured, others succumb to some strange and totally irrational madness, other still are so plain stupid that it hurt my eyes just to read about them. And then… Yeah, well, it seems that after all I cannot with clean conscience omit the problem of sexism and obnoxious scenes of sex. Their distastefulness is only a part of the problem. But the main issue is that they appear in so many random places, without any reason or logic, without any discernible function – they just are for the sake of being, or maybe pleasing some sadistic/masochistic streak in readers – or the author himself. And besides, what in the world possessed Bakker to make him write about dangling phalluses, rapists shearing through cotton shifts and soft peaches every freaking second page?! Truly, he ruined the word “peach” for me.

I will probably finish the trilogy. Probably. Definitely not in the near future. I’m more than a bit fed up with the world of Ëarwa, but most of all I know I won’t be able to suffer any more of Kellhus right now.