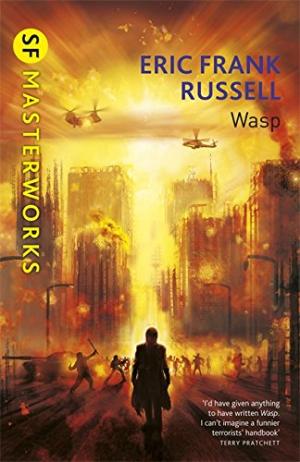 Long time, no entry. Warszawa takes more of my attention than I would’ve liked, what with constant travels and over-hours I’m already packing into my “teaching abroad” 😉 I have no time to write, but a lot of time to read on the 2,5 hrs train ride to and from Kraków… And so today a short review of an equally short book, a sweetly sour oldie proudly wearing its badge of acclaim (at least my copy does!) from the late Sir Terry Pratchett:

I’d have given anything to have written Wasp. I can’t imagine a funnier terrorists’ handbook

Well, those two short sentences sum it up pretty neatly. I wouldn’t have to add another word ;).

But for those who didn’t have the pleasure of reading this book yet… a bit longer review.

There is a war going on, a bitter, unending conflict between Terrans and an alien Sirian Empire. Terrans have technology on their side, but Sirians have the sheer numbers needed to overpower Earth in one smooth, not overly long motion, outnumbering humans by a factor of twelve-to-one. Sounds vaguely familiar, maybe bringing to mind something like a past war or two? Well, it should. Sirians look very much like humans – the only differences are purple skin and pinned-back ears, and a bow-legged gait, almost laughably easy to imitate.

The one thing that nobody laughs at is Sirian secret police, Kaitempi, ruthless and extremely powerful, the de facto rulers of the Sirian society.

The plan devised by humans to defeat the Sirians is very simple. Terrorism. A few chosen individuals should infiltrate enemy lines, melt into the Sirian society, saw discord and alarm, defeatism and disruption, terrorize and sabotage, wage a one-man war… in short – prepare the ground for a Terran invasion. Become a wasp in a moving car, small but able to create deadly havoc.

Enter the scene James Mowry, a real badass with the added virtue of having been raised in the Sirian Empire. He shares with his namesake Bond not only a name, but a slew of other characteristics: self-reliance, cold reasoning, ingenuity, sheer audacity and no respect for authorities, coupled with ruthlessness and a strong survival instinct. He undergoes a long and difficult training, surgeries designed to make him Sirian in appearance, and is sent to an outpost world of Jaimec to complete his mission. The mission starts innocuously enough, by posting subversive stickers on the glass windows of shops along main streets of Jaimec’s capital. The stickers hold on tight and when approached with soap and water dissolve, but not before their message gets etched into the glass in a complicated chemical process.

There is not much characterization or psychological depth in this novel, come on, it’s 50’s after all! 😉 Also, don’t expect ingenious worldbuilding, invented languages or complex, morally ambiguous action, no. It’s more or less along the lines of Mowry does that, goes there, and that’s basically it. But the strength of the novel lies in two spheres: the first is the humor; dry, ironic and utterly black, it fills the book and gives the reader much of a needed distance. It is a veritable well of guilty pleasure, watching Mowry’s first, seemingly innocent antics and his later, ever more serious actions, and seeing the Kaitempi’s/society’s reactions to them; more than one Goodreads reviewer confessed to have been rooting for the “good guy” Mowry. A bit like V for Vendetta kind of thing, I’d say if I were in a contrary mood ;).

The second sphere of Wasp’s undoubted influence is a twisted sense of realism. It really IS a terrorists’ handbook. Apparently, the novel was supposed to be filmed more than once; but the terrorist aspect always stayed the hands of directors and big movie companies. Lisa Tuttle in her foreword mentions Neil Gaiman as the person having the filming rights… Maybe that’s also the reason Russell’s book is not as well known as it should be? There is something deeply perverse, especially post 9/11, in the fact that you root for a terrorist, be it a Terran or Sirian or whoever else. And maybe Russell even designed it this way, having worked in British military intelligence during WWII, and having written more than one openly anti-war book. One thing is sure, Russell had been exceedingly far-sighted when it comes to predicting human behavior faced with elusive, unnamed threat of terror.

Mail would be examined, and all suspicious parcels would be taken apart in a blast-proof room. There’d be a city-wide search with radiation-detectors for the component parts of a fission bomb. Civil defence would be alerted in readiness to cope with a mammoth explosion that might or might not take place. Anyone on the streets who walked with a secretive air and wore a slightly mad expression would be arrested and hauled in for questioning.

It is a surprisingly wise book, if you look deep enough, past the layers of dry, ironic humor and simple action. But beware; it may change the way you look at terrorism, for good or worse.