Ola: Stranger Things, the newest Netflix’s darling, is a heady, serialized mix of Alien and E.T. in the 80’s guise. If that sounds weird, well – it should. Stranger Things is pretty messed up, and proud of it. And it should, because no matter how weird it all sounds, watching that series is a ton of fun. Plus a dribble of revolting goo, but we’ll get to that later.

All right. We’ve got a small town somewhere in Indiana, in the middle of nowhere, with its fair share of those living the trivialized version of American Dream and those who just don’t fully fit the norm. Among the latter are four nerdy boys aged 11, who play D&D with the blind devotion of someone very young, and excel at theoretical physics, want the outside world to be a place more mysterious and strange than anybody could dream of, and not much else ;).

The real action starts when one of them, after a 10-hour long D&D campaign at a friend’s house, doesn’t come home. He was last seen on a road called Mirkwood by the geeky boys, a road heading through the local woods, right next to a huge, federal power plant. Yeah, you can already hear the low, ominous sounds of the Jaws soundtrack…

Piotrek: Excuse me, there was plenty of action during the D&D session. They had to fight The Demogorgon! A bit incorrectly according to some experts, I’m a Warhammer guy so I wouldn’t know. But they got me by that point.

Ola: What ensues is a mix of family drama, teenage angst and coming-of-age themes in a pure horror/fantasy/sci-fi setting, with lots of sneaky, heartfelt nods toward all things 80’s, from Star Wars through clothing furniture to the crazy conspiracy theories of the time and the average American’s notion of drugs. But the most notable inspirations, to which Stranger Things is a quirky, reverend tribute, are the defining movies of the time: E.T. and Alien. Plus, of course, more than a bit of Twin Peaks and X Files. And even The Goonies! There’s a lot of tongue in the cheek in Stranger Things, and a lot of Easter eggs hidden here and there for the avid audience. It’s a pure, childlike fun to watch the adventures of the fearsome quartet, especially when one of the four is replaced with someone really strange…

Piotrek: I’m not a huge 80-ties fan, but I love the idea of them presented here. Twin Peaks… I haven’t thought of that, but yeah, it’s there, definitely. 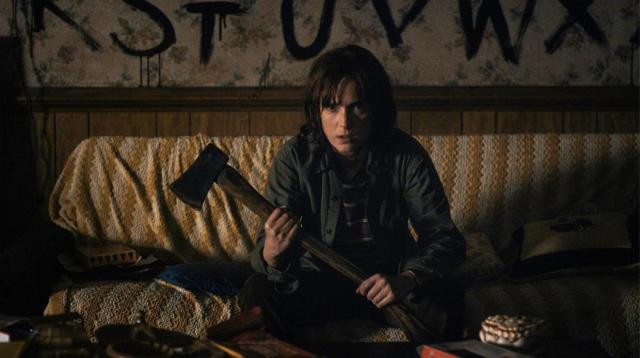 Ola: I loved the interplay of 11 and E.T., from Mike’s faked sickness and 11’s fondness of radio, to the conscious similarity of their disguise – the dress and the wig were so cutely reminiscent of E.T. that I couldn’t help but smile.

I also really enjoyed the social part of the series, the family/teenage drama if you’d like – all the relations between the main protagonists were depicted in a nuanced, pretty realistic way, and the whole cast of actors was a pleasure to watch – especially the younglings ;). But the roles of the grownups are solid as well – from the grieving mother, played lovingly by Winona Ryder, through the succinct, macho sheriff with personal problems, to the quirky physics teacher and the Big Bad scientist… Stranger Things doesn’t shy from typical – it embraces all the rules and the old, worn themes, and breathes new life into them, this time full of postmodern self-awareness and a sense of pure, unrestrained fun.

Piotrek: What’s there to add… I love Stranger Things for the self-confidence that allows them to play so many tropes straight and provide the cynical audience of our times with tons of fun. It’s anchored in their perfectionism (apparently they went wrong with one of the cars… one). And some solid storytelling. Like a good RPG campaign, not too innovative, but so immersive. And music… and the way they experienced it… pretend-guitar playing with The Clash… 🙂

I wholeheartedly agree with the praises all the actors got from Ola, kids, teens and adults alike. Geeks & 11 are my favourites, obviously, and Barb too… It was so nice too watch it, I couldn’t care less for the minor problems, like the ones Ola is about to point out…

And I got a bit of the revenge of the nerds feel. Not directly, and not like in a silly comedy of that title (one I never liked), but an serious appreciation of. what some of us were, and did, as kids… And did we win the culture wars? How to feel superior when everybody plays tabletop games, watches Game of Thrones, and Stranger Things?

Ola: Yeah, I wouldn’t be myself if I didn’t have a critical remark or two. And this time, lo and behold, is about the internal logic ;).

I was rather underwhelmed with the full concept of the other dimension – I very much liked the general notion, but not the detail. It just doesn’t stick together. One monster from nobody knows where suddenly appears and inhabits a world that simply waiting on the other side, a dark reflection of our own. How did the monster came to be there? We see an empty egg shell, we catch glimpses of its mode of reproduction – where Alien weighs on the imagination of the creators in a decidedly too heavy a manner – but if we follow the logic, we still have no idea how the monster came to being in the first place and, more importantly, what did s/he eat? This part of the story feels like it’s solely designed to induce fear and revulsion, and not with much worldbuilding in mind. I know it sounds picky to the extreme, but as someone who spent a better part of an evening discussing the monster’s way of reproduction and why it was genetically inefficient, I feel entitled to it :P. The Alien thread seemed overly worn at times, from the entire imaginarium borrowed in full (the monster a.k.a. the toothed vagina, or the daisy flower, was the top example of the Duffer brothers’ love for Ridley Scott’s franchise) to the logic driving the series’ action. The ending was slightly underwhelming too, heavy-handed in its need to underscore the fact that we end up where we started, only with more monsters and 11 hidden away. Still, these are the rules of recurring series – you’ve got to end on a heavy note to be remembered a year later.

Piotrek: Yes. So what :P? And maybe there will be some explanation in Season Two. By that point the actual final fight was not too important to me 😉

Ola: With all that in mind, I will be eagerly awaiting the second series. Stranger Things is a great watch, enjoyable and scary, and a real treat for all geeks and nerds, especially those who still remember 80’s ;).

Piotrek: It’s a gem. And though we live in good times (as far as popculture is concerned), you still have to appreciate the gems.