The game is great, books – also, I believe so, though the world is not unanimous on that, maybe my perspective is distorted by the fact it’s the first significant Polish fantasy series, and still one of the best, with uniquely Polish humour and perspective on things. Not wholly translatable into English, I’m afraid.

Maybe one day I’ll read the translation, I’m a bit curious. But it’s the only major franchise I’m experiencing in my mother tongue, it’s just so very Polish in every way. A hobbit I’ve met near Novigrad yesterday was a joke at a terrible LotR translation from the deep 90-ties (how I hated it, but for a moment it was the only one available in bookshops…), even the curse words are so cool… 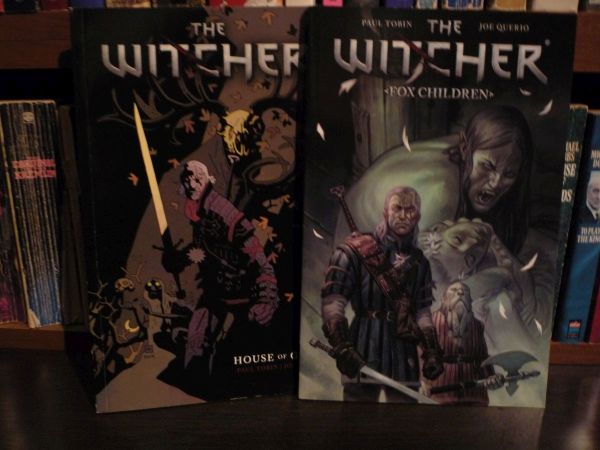 Two volumes I’ve read so far, House of Glass and Fox Children, were clearly spiritual children of the games, not books, but since we’re talking about the greatest cRPG series ever, it’s not exactly an accusation. Something I’ll probably repeat many times in the ever coming Wiedźmin book review – Sapkowski is a very interesting writer, but ultimately, whatever his Polish fans might think, one of many. The Witcher’s creators are geniuses of their trade.

I’ve clocked in… more than 30 hours of gameplay I think, and I’m pretty sure it will take me at least 200 to finish the entire game. And I’ll be sorry when it ends.

Comic books, way better than Polish inept attempts at marrying that medium with Sapkowski’s stories, published decade or so ago, each depict an equivalent of a solid side-quest from the game. We get unusual monsters slayed by an unusual hero, interesting side-characters in a grim world. Geralt is his decent self, getting along fine with the ladies. Monsters often have their reasons for their actions, because humans are not the only ones wronged, more often than not theirs is the original sin. People asking witcher’s help often hide dark secrets that make us feel less bad about their plights.

Stories are cool, art suits the story and the universe well, and if someone read the books after that, well that would be great. They are worth it. For game fans it’s not a must-read, but a chance to visit their favourite world for a few more adventures.

They are small, tight plots that make more sense as a part of the whole multi-media franchise than on their own, but it’s a nice supplement for people already convinced Geralt is worth their time. Could it be the gateway into franchise for complete outsiders? I doubt that. Like most similar endeavours, it requires some previous immersion in the particular universe to really appreciate it.

But it’s the best video-game related comic I’ve read, and I’ve read a few, from Dragon Age and Baldur’s Gate to Mass Effect, and I recommend it to every Witcher fan. And sword&sorcery comic book lovers.

Tobin simplifies many things, but still gives us a glimpse of this unique world and I’d love to read more volumes of his series 🙂

And now, let me go back to Novigrad, eternal fire needs some extinguishing…

2 thoughts on “A few words about The Witcher comics.”