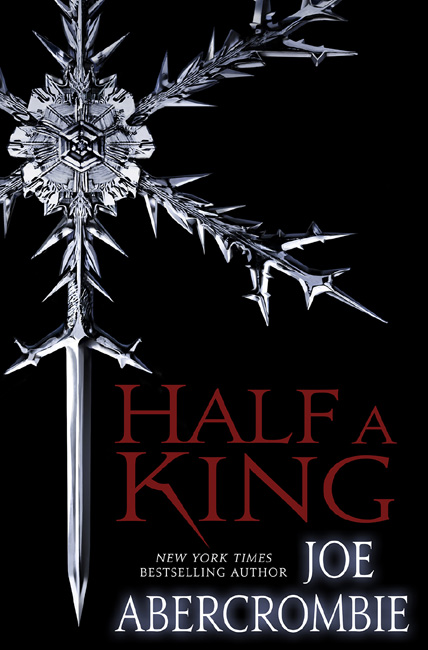 The first installment in the Shattered Sea trilogy, and a bold move from the author called by many “Lord of grimdark” (ugh, I actually wrote it). Why bold? Because Half a King is a YA book. YA is a category with somewhat blurred boundaries, usually containing youths from age 12-15 to early 20s. It shouldn’t come as a surprise then, that the traditional theme for YA novels is coming-of-age of the main protagonist. And among the novels often described as YA are such timeless wonders as Treasure Island, Lord of the Flies or The Catcher in the Rye. Of course, you can also find there such wastepaper accretions as The Twilight saga… The spread is quite shocking and I’m sorry to say that the quality of YA seems to be lower in our times. I believe that it’s because people often think that writing for young people is easy, that you just need to limit your vocabulary and simplify everything. Well, it’s not easy. And if you think young people like to be talked down to, your memory needs a solid prod. Otherwise you’re in for a nasty surprise.

As you see, the YA bar is set quite high, at least for me. Did the grimdark guru meet the, admittedly high, expectations? Half a King got Locus Award for the Best YA Book in 2015, so it looks like he did. Alas, I cannot fully agree with this verdict. I know, there’s a lot of gushing over this book in the internet, especially from fellow authors on goodreads… I won’t expound on it, at least not this time :P, but it looks to me like a mutual admiration society. Abercrombie takes a risk but plays it safe this time, a bit too safe for my tastes. And I’m not talking about the amounts of blood and gore, there’s plenty of that, but about the plot, worldbuilding and characters. They’re overly simplified and predictable, bereft of suspense and – and I have trouble believing I’m actually writing this – bland.

But to the point. Half a King is a story of Yarvi – the second son of a Viking ruler Uthrik, smart and born with a deformed hand and viewed by his peers in the brutal Viking society as something rather shameful and embarrassing, best hidden in darkness. Nobody in their right mind would even think of Yarvi as a ruler – but they must, when Yarvi’s father and older brother are both murdered by a hated foe. The tale of treason and deceit enfolds, and we’re taken for a long, painful ride through the Viking lands and seas when Yarvi is forced to go on his special Hero Journey. Of course, Abercrombie wouldn’t be himself if the story didn’t have a couple of twists, but apart from them it is rather boringly predictable. Our young protagonist learns the hard way that things may be not what they seem, and that we don’t always get what we wanted. The leading thought, that “It’s all about money”, left me a bit disappointed, and with this song in my head.

Don’t worry, Abercrombie still knows how to write. There are many striking scenes, graphic in their intensity and violence, there are also others, quietly moving and no less important for the plot. There’s plenty of action, the pace is fast and steady. There are also a few twists and turns, but as I said already, there are too few of them and they’re a bit too obvious. Nevertheless, they leave the reader with a sense of familiarity and relief – that this is still Abercrombie, after all. However, the development of the main protagonist left me completely unconvinced. The character wavered between a whiny teenager and a budding hero, trying to build within himself the king he ought to become, and succeeding in less than 24 hours. The inconsistence was really irritating. It would’ve been painful if I cared about Yarvi more, alas… He’s not a very likeable or sympathetic guy.  The accompanying cast had its strong points, mainly Rulf and Jaud and Laithlin, but the rest of the characters was achingly clichéd. Especially “Nothing”. “Nothing”. Seriously?! It’s like putting a big, shiny, blinking sign over his head. “Hey! Watch out for this guy! He’s not what he seems!” Sigh.

The worldbuilding was never Abercrombie’s strongest suit, but here the world is only sketched in broad, vague strokes, as if the author took a map of Baltic sea and decided to place his novel “there”. Warning – a mild spoiler ahead. There are several mentions of elf-structures in the book, a part of the story even takes place in one of them. I know it should have come as a surprise that those “elf structures” are in fact buildings of older human civilization destroyed in a great catastrophe, probably nuclear, but the revelation is so heavy-handed and without any real consequences that it evoked only a shrug. “Oh, so it’s not a medieval fantasy but post-apo? All right. Whatever.” Of course, Half a King is only the first of three books, maybe in the second and third installment the worldbuilding plays a more important role… For now, though, it was disappointing.

And this brings me to my last point, mainly – lack of imagination. It’s a strong accusation of a great sin in fantasy genre, so let me explain it in more detail. You have a post-apocalyptic world. People who live in it have even forgotten that the remnants of the great civilization they see around are in fact human artifacts. They have no memory of the past. From the long-cold ashes of old civilization they can – and must – create something completely new. And yet they mimic Viking times. Of all the imaginable, future, present and past shades and hues of human culture they choose Vikings and imitate them so completely that you mistake their times for Middle Ages. If that’s not lack of imagination, I don’t know what is.

But don’t get me wrong. The harshness of my review stems mostly from two things: 1) it’s an Abercrombie book and I expect from him more, and 2) YA is a very difficult, demanding genre which I believe should be given more attention and devotion than it currently enjoys. Because, all in all, Half a King is an easy, fast, quite enjoyable read – at 384 pages it can even be called “short” (ah, the times we live in…). It’s just that it could have been much better.