Finally, a book I can bitch about, after a few I loved very much. I need to lower the average score a bit ;). 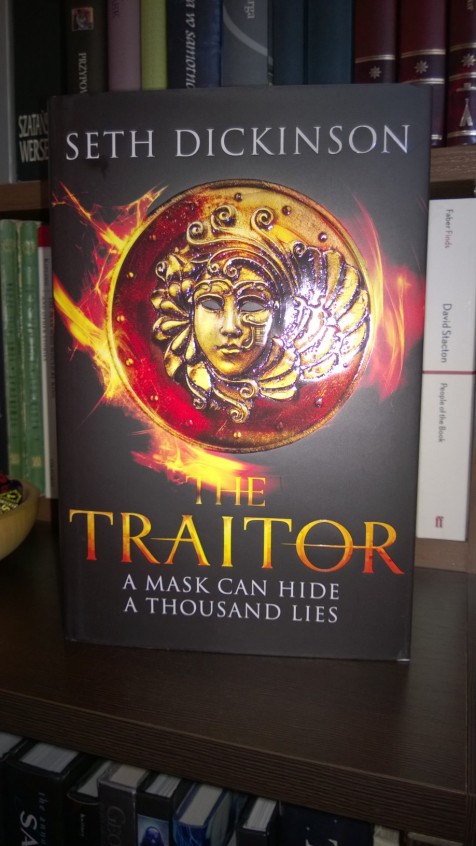 The Traitor (in US the name of the protagonists, Baru Cormorant, was added to the title) is a book that became rather famous not so long ago. I was hopeful, initially, despite certain clumsiness of its writing and its structure, but my final verdict is negative. All the imperfections would be forgiven if the main protagonist passed my likeability test. And she failed miserably, becoming, from my POV, the final nail, instead of a saving grace.

But lets start from the beginning…

Little Baru was born on a small island that had the bad luck of being situated in a strategic position, on a way of an expanding empire. Empire that does not have to send a big army to conquer Taranoke, a tricky economic treaty and a little bit of divide & conquer suffices.

Then the roads came, sanitation, medicine, organization, public order, education… something along these lines: What have the Romans ever done for us…

Still, dissenters have a point, because not all is good. Taranoke had a society that did not fit the imperial (Imperial Republic of Falcrest, actually, or The Masquerade) requirements. Extended families, two fathers + one mother? No can do, this totalitarian tyranny rule combines eugenics with homophobia to create a very unpleasant society. Living there is not worth the benefits, on this I agree with the dissatisfied part of the population.

All that is not an argument against the book. In many ways it’s a decent one. World is not too imaginative, but diverse enough, most of the characters are only sketched, but some are interesting, and one or two maybe even likeable…

The major story archs are interesting, but the book often skips long periods of time and as a result we are not given enough substance, enough context. Part of the novel read as a sketches painted with a big brush. That is not how I like to experience stories.

Machiavellian politicians, high strategy, large-scale economic systems… can make a great fantasy epic, but are, by themselves, not enough. A more convincing writer would be good. McClellan does not forget about economy. Gladstone makes it the basis of his excellent series of stand-alones. And both had great predecessors. Here… I see some interesting ideas, that could grow into something good if the author wrote his next books with more patience and care for details.

It’s, I think, second fantasy LGBT epic I’ve read, and it does not change my view on it one way or the other. I’d say I enjoyed it more than Delany’s Tales of Nevèrÿon, but in neither case sexual orientation of protagonist had any influence on my judgement. Actually, the main romance here almost moved me, but by that time I was too annoyed with Baru to change my mind.

Now, a few comments on some of the numerous blurbs from the cover of my edition (how I hate blurbs on hardcovers!):

Dickinson has written a poet’s Dune, a brutal tale of empire, rebellion, fealty, and high finance that moves like a rocket and burns twice as hot.

Max Gladstone (from the blurb)

Really? There is poetry in Dune. And the economic models of Gladstone’s own books are among the most amazing I’ve ever seen in fiction. High finance in The Traitor is present and serve its purpose well, but it’s not that sophisticated. Just competent. And the style is far from poetic. Some parts read like a series of sketches (not poems). In times of 1K page Behemoths every book below 400 pages is to be cherished, but this one could use extra 2-3 hundred pages just to flesh out the world and characters. I did not feel the same heat Gladstone did.

An intelligent and accomplished first novel reminiscent of Le Guin in its reflections on imperialism, colonialism, and the attractions of power.

Another blurb, by Una McCormack. And it’s funny that Le Guin gets mentioned, because she was on my mind often while reading that. But I was thinking how much better she was decades ago and how Dickinson invented nothing new. Which does not disqualify the book, but I don’t get all the admiration he received.

I’m also not convinced by the worldbuilding. The advantage Empire has over its competitors is not properly explained. Taranoke was a small island, but Aurdwynn was civilised for centuries, and suddenly Falcrest manages to be vastly superior on all fronts… it felt artificial. The world did not feel organic, but built from the top after the author decided which tropes he wants to use.

All that being said, I’d still give 6,5-7/10 score, if I liked the book. This is tricky and very subjective, but the review is not only about whether I think a book is good, but also about my enjoyment as a reader. So I will try to explain why I downgraded The Traitor to 5,5/10.

Ok, so here it goes – I like Bayaz more than I like Baru. Abercombie gives us a duel of ruthless chess-masters. Dickinson… overplays his hand with too many tropes and not enough polish. If it was a great book, I’d feel guilty about not liking it. Luckily, I don’t have to. I explained why I don’t think it’s great. Why don;t I like it?

!SPOILERS AHEAD! Right till the end…

I’d support Ned Stark if he decided to slaughter all the Lannisters, because he’d still be my prince, and his eventual rule – greater good worth some sacrifices. Baru commits acts of disgusting treason, and heinous atrocities, for very doubtful goals. I don’t believe in  her case the path of rising to power by advancing through the system leads to any good results. I’m not convinced she is a person capable of creating a better system. She not the Prince(ss) I’d put my trust into, and give the power to judge what evils are necessary to. I don’t believe Baru represents anything worth fighting for, and by the end she is not even worth my compassion.

A very good novel could leave me a heartbroken, but satisfied reader. This one left me angry. I think I know what the author intended, but it looks as if he had chosen the tropes long before outlying the plot of the novel. And what he later wrote is not convincing enough for me.

The Empire is too powerful and all-knowing, too efficient. It’s opponents – too stupid and inapt. Baru, even if a child-genius, advances too quickly through the ranks. Maybe a slower first instalment, with her committing smaller crimes for modest gains and preparing for greater betrayals later in her career, would make me believe in the story. Instead, she is, as a teenager, given a province to rule, and joins sinister hidden council of the evil empire before she turns thirty. Hmm, maybe I’m just jealous?

Even if we believe in her motivations (as they are stated in the book), I disagree with her choices. Taranoke of Baru’s childhood does not exist any more, and she knows it. She betrays Aurdwynn that probably could be saved, and destroys the last significant forces within the Empire capable of fighting its totalitarian regime. And we know there are big external powers, one of them wants to ally itself with the rebels, another – is highly antagonistic towards the Falcrest. Even Assyria was brought down by a combination of revolts and invasions…

During Tain Hu execution, I did not feel it was a difficult test for a future hero. Everything worth fighting for was already lost and the last decent human being was murdered to emphasize that.

I don’t know what I’d do in a world like this. With a book it’s simpler – I refuse to suspend my disbelief and immerse myself in what does not feel authentic.

The Traitor is too ambitious and does not, in my opinion, deliver on its promises.