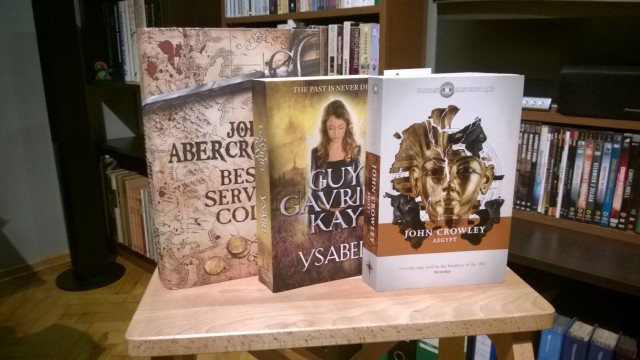 Joe Abercrombie‘s Best Served Cold is a delightful tale of revenge that does not change my opinion of the author. As in: I still believe he’s great. Characters old & new, shadowy puppeteers we know from the trilogy, murder and despair, and a sliver of hope. Through all the grimdarkness Abercrombie shows, once again, that there is a chance of redemption and there is (a bit of) good in (some) people.

Ysabel by Guy Gavriel Kay is a novel that won quite a few awards. This urban fantasy of sorts is loosely connected to his début trilogy, The Fionavar Tapestry, one of the most sophisticated examples of tolkienian fantasy from a guy that helped Christopher Tolkien edit the Silmarillon. Ysabel is unique among his works, because instead of creating a history-inspired fantasy world (he based his novels on such epochs as renaissance Italy or Islamic Spain), we have real Provence with a dash of magic. And Kay’s vision of early XXI-cent. teenagers. Well… clearly, he did as much research as in case of medieval knight. His knights are slightly more believable. But I love his writing, and I was enchanted by his story. I will write a brilliant 8/10 review and Ola will disagree 😉

John Crowley’s Aegypt is also brilliant. I’m only halfway through, but something terrible would have to happen in the second half to make me dislike it. Very sophisticated novel about New Age, philosophy of history, Shakespeare… with a big question – does history have a plot or is it only one damned fact after another?

Stories are what history not made of time is made of.

Very interesting book. It reminds me… a bit of Foucault’s Pendulum, but it’s fantasy, so there is some truth to our protagonist’s theories.

What next? Some of GRRM-co-edited anthologies, I have a few on my bookshelf and only ever read Songs of Love and Death. It was… uneven, but had some strong points. I remember loving Hobb’s and Gaiman’s stories and deciding I’ll never read Kushiel books. Then… more Kay? Song for Arbonne sounds like a book for summer.

And either some nonfics, or some science fiction. Ian Banks came into my radar lately, not for the first time, but excellent podcast make me really wanna read it. An interesting vision of post-scarcity economy, that’s what we need, here & now.

Or something else, I have way to big TBR list.

2 thoughts on “A Summer of reading”