Tanith Lee has been on my radar for quite some time. A British writer, famous first for her Birthgrave Trilogy, I was introduced to her by Andrzej Sapkowski, author of literary background of famous video game franchise, whose Manuscript Discovered in a Dragon’s Cave (nonfic never translated into English) is a nice journey through genre’s history and tropes.

I started with something else though, first volume in Tales from the Flat Earth series. Short collection of interconnected stories went into my Audible wishlist after someone recommended it on r/fantasy. I was happy to listen to it and will read the rest, sooner or later. 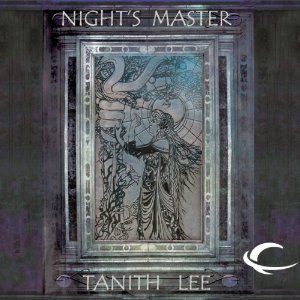 What do we get? A few stories set in a world where the Earth is flat and populated by people with their medieval/fantasy civilizations, beautiful, but indifferent gods above and passionate, but evil demons below. First among them, Azhrarn, is cruel, whimsical, but has a certain roguish appeal, of a kind I usually don’t understand but many modern readers enjoy 😉

So when the great evil he released into the world comes close to destroying it, who turns out to be its last hope? I’ll leave it for the readers to guess… Genre readers of today won’t be surprised.

Of course, in 1978 it was something (relatively) new and fresh, at least in the genre. But predictability does not change the fact that it’s a solid book with interesting, if trope-ish, characters. Well, the clichés aren’t as annoying as they often are, because the tone of Night’s Master demands them. And the tone was what I enjoyed the most, maybe even more because I heard it read by a good narrator.

Well, the above quote concerns a small minority of characters (of any book 😉 ).

These are tales of world’s beginning, mythical stories like the ones told around fires before pop culture was invented. Myths, or Grimm Brothers’ fairy tales, in their original, grim version. When we take this into account, Azhrarn’s evil ways are more understandable. It’s a world without (Christian) morality, and the trickster god just happens to be the only one involved in its history. Trickster gods are no fun, see The Magicians.

So, it’s a little dated, maybe, but unique, and, for me, well worth a few hours needed to absorb it, in written or spoken form. And I’m certain I’ll read the rest of the series, sooner or later.