In the wake of last night’s match (Poland vs. Portugal in EURO2016, for those who didn’t watch, it was 1:1 and Poland lost in the penalties) I decided it was high time to take a closer look at certain aspects of alternative reality. Let’s indulge into a bit of “what-if”, shall we? 😉

Neil Gaiman is known mostly as an author of very popular and critically acclaimed fantasy/horror novels, such as American Gods, the Hugo, Nebula and Locus awards winner, but he’s also a great comic book writer. His series The Sandman, an imprint of DC’s Vertigo, had been one of the most influential – and popular graphic novels of late 90’s and 00’s. But this post is not about The Sandman ;), besides I’m sure Piotrek has much more to say about it than I ever will. No, this post is about a one-off job Gaiman did for Marvel in 2003, a few years after The Sandman ended.

Marvel 1602 is a traditional, albeit a bit tongue-in-the-cheek, what-if story. In an alternative reality, Marvel superheroes live in the Elizabethan times, fighting against threats from this and other worlds. The main story arc revolves around the discovery that their sole existence, which happened 400 years too early, is inseparably linked to a lethal threat to their whole world.

The Europe is under spell of strange, dangerous weather, portending to many the Apocalypse, end of the world. And they may not be far from truth… The rulers all over the world look for answers – and weapons – while pretenders decide to take their chances and make a grab for power. The key to the mystery is a strange Native American with blond hair, who comes to the court of Elizabeth as a bodyguard of Virginia Dare, the first child born in the Roanoke colony. The English court is rife with conspiracies and treason, involved into a covert war with Spanish Inquisition, and secretly  covets an ultimate weapon hidden by the Templars.

Yeah, a lot is happening in those 8 issues ;). The story is quite engaging, but for most fans the real treat lies in finding out all the Marvel heroes under their Elizabethan guises, assumed professions and changed names, and catching all the references, hidden within the text and the images like a slew of Easter eggs. Some are quite obvious, others much less so, and the authors have more than a few tricks up their sleeve. I said “tongue-in-the-cheek”, even though the story itself is pretty serious. But the way Gaiman and Kubert play with readers’ expectations is really superb. They are subtle and misleading, underplaying their hand constantly in order to lure the reader deeper into their story. It’s engrossing and pure fun. But if you’re in for mind-shattering experience, for controversy, heart-rending emotion, or maybe contemporary, critical political allusions or a journey into the heart of darkness lurking in the humanity, Marvel 1602 is not for you. It’s a light read, and I will stand by that assertion even in the light of all the deaths plaguing this world’s superheroes… Many authors like to play cruelly with the key characters in the alternative universes, doing things forbidden in the main timeline and reality, and Gaiman is not an exception ;).

My favorite bit is the Spider-man arc. The Templars’ arc is decidedly not far behind, but there were a good few times when I sighed in mock frustration upon seeing all those tempting spiders ;). 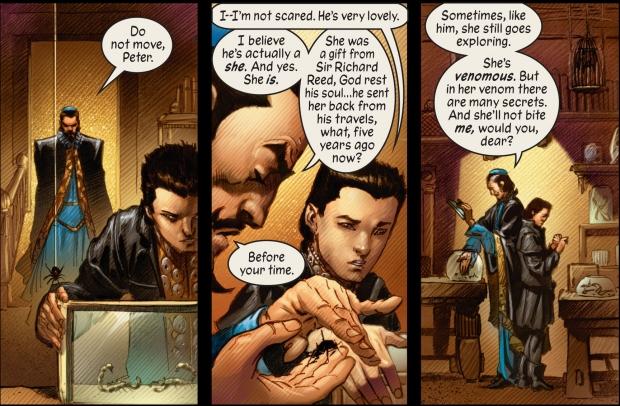 I very much appreciated the Watcher story, it was one of the rare poignant moments in the comic, giving it more of the much needed depth and perspective. As for funny bits… Well, the idea of Daredevil singing… Um. Let’s just say I’m glad the comics don’t have sound effects.

The story has been a success enough to warrant several tie-ins, but the main arc is resolved in the eight main issues.

And lastly, a few words about the art. I loved the covers by Scott McKowen, the scratchboard technique seems especially suited to the fake in-period renderings of our heroes. But the artwork of the story panels is very good too. A bit subdued and gloomy, the palette of colors is never vibrant or bright. Browns, beiges and greys dominate, with accents of dirty red, dark green and purple. I like the use of hues, especially the play with the traditional colors worn by the superheroes. Their new appearances are a risky play between the old and the new, and I’m glad to say that this gambit had been mostly successful.

A cool read for all Marvel fans and a light, fun ride for Gaiman’s fans – here Gaiman curbs his penchant for uncanny and horror, and focuses on a less ambitious but no less enjoyable task of reimagining the turn of the century world when everything still seemed possible. There is a pervading mood of nostalgia, the “what-if” changing on the way to more of “wish-that”, and the character of Rojhaz provides the best example for my statement.

And there is also a tinny tiny bit of supernatural foretelling, especially for the Polish citizens.President for life – two for a price of one :D.