Just last week I reviewed one excellent, trilogy-concluding book from Night Shade Books. It’s not entirely a coincidence that this week I’ll write about the final instalment of another Night Shade trilogy, Michael J. Martinez’s The Daedalus Series. It’s title is The Venusian Gambit and it makes a nice conclusion to a very fine series.

That’s exactly what happens and Martinez delivers third book that is just as good as previous tomes. Which is good, and bad – I hoped for some improvements. Still, The Venusian Gambit was a pleasure to read and a book I happily recommend. 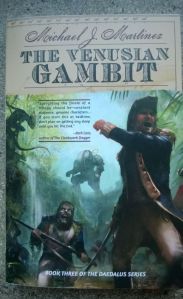 Now the story is complete and anybody to whom the premise of hardcore s/f combined with steampunkish Nelson in space through alchemy alternative sounds cool – can safely grab volume one.

While part one ended in a way that could had been final, second instalment’s final confrontation only delayed the final battle. Agents of ancient Martian warlord Althotas still plot, in our future and alternative past, to bring him back to power. Commander Shaila Jain, admiral Weatherby and Anne Weatherby (formerly St. Germain, formerly Baker) & their friends and associates again do their best to thwart their plots. Well, the XIX-cent. part of our crew also fight Napoleon’s zombie army occupying most of England, so there is that. And there will be way more direct interaction between people from parallel universes. Way more. I wanted the stories to be more interconnected and that’s what I got. It not a spoiler, just look at the cover – mecha vs. zombie 😀

Again we see all the major influences. Maritime novels, pulp, hard s/f from the fifties, what have you. They blend together nicely, even ones that shouldn’t – like hard s/f and pulp. So there is some improvement 🙂

Characters continue being likeable. Not too sophisticated, they are mostly homages to their respective genres. But written with love and skill. Enjoyable reading that does not pretend to be more than it needs to be.

It is a praise. Novik’s Nelson on dragon series had even cooler premise, but I was to annoyed at its attempts at social commentary (on defenceless, long dead, victims) to enjoy it fully. Here, action is king and political correctness, though present, does not spoil the fun.

What could be better, is plotting. We have nice character and extremely cool setting, but his arsenal of tropes is quite limited. Every time when our heroes, on the verge of accomplishing something, get kidnapped by (often the same) villains, I cringe a little. And a veteran of multiple campaigns refusing to kill repeatedly backstabbing enemy on principle, only to regret it very soon… plot armor of some characters is painfully visible. And sometimes things happen because they need to. But not more often that we’d expect from a book inspired by rigid hard s/f or Martian pulp.