Widely considered the best Daredevil comic storyline ever (just check the tvtropes site if you have any doubts), Born Again also holds the 11th place on the list of 100 Greatest Marvels of All Time. Ostensibly, this is the graphic novel which saved Daredevil series from closing down. And also the one which very heavily influenced the recent Netflix TV series and most probably will continue to do so.

A story in 7 parts, clearly designed as a whole, with one overarching story masterfully linked to Roman Catholic concepts of sin, guilt, salvation and redemption, plus the requisite and remarkably tasty additions of Apocalypse and Armageddon. That Catholic inspiration is very strong not only in the narrative, but also in the visuals; Mazzucchelli directly links Daredevil’s experience to the life and death of Christ, creating poignant images of Pieta, a bit unorthodox Holy Trinity or of the dead body of Christ. There are even very emotional portrayals of Mary, mother of Jesus, and Mary Magdalene. And a few mysteries along the way.

Of course, it wouldn’t be a proper Marvel comic book if it wasn’t full of explosions, fist-fights and general mayhem, so there’s plenty of that too. The mayhem in Hell’s Kitchen gets large enough to get Captain America’s attention when his mad counterpart, Nuke, the last one of the aborted, malformed children of the Super Soldier program, attacks New York. The fight between the three of them, Daredevil, Nuke, and Cap, brings also some of the other Avengers – and we get to see the cameos of Thor and Iron Man as well. And… This is the only thing about this comic that I would happily excise and forget it existed. It’s completely superfluous.

But first and foremost this is the story of the conflict between Daredevil and Kingpin. When Wilson Fisk learns the secret identity of Daredevil, he decides against killing him outright. No, true to his nature he decides to play with him, to destroy him so completely that Matt Murdock will lose the will to fight and the reason to live. Fisk wants to break him and he almost succeeds; we can see the darker side of Murdock in its full grim glory, see him dancing on the edge of madness, see him consumed by violence and rage and despair. We see him attack Fisk and lose.

But, as Fisk realizes, even beaten and deprived of everything, Matt Murdock cannot be broken. 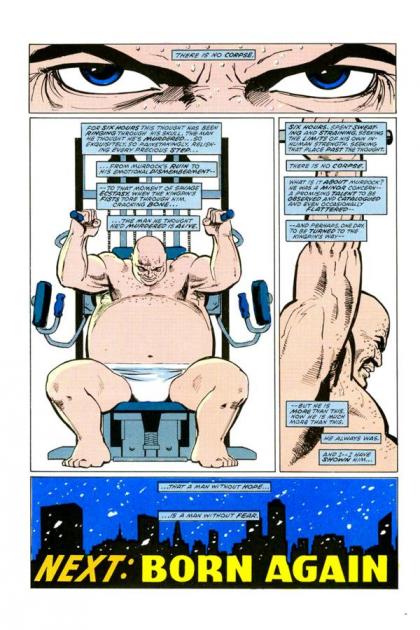 It’s one of the best superhero deconstruction story I have read, there up on top with Alan Moore’s Watchmen. Okay, a tier below Watchmen (and it’s Nuke’s fault!), cause there’s nothing that could compare to Moore’s opus magnum as a superhero deconstruction ;). But it doesn’t change the fact that Daredevil: Born Again is a terrific story, clear and beautifully structured, self-contained, without unnecessary detritus, or continuity problems or other such irritating nuisances so common today. It’s a story about humanity of the superheroes, their vices and virtues alike. And as such, it’s also one of those rare instances when the superhero for the most part of the story doesn’t even put his suit on. It’s the story of the man behind the suit, and the same goes for Kingpin. Fisk has become a powerful figure both in the criminal world and in the official one. He had amassed money and influence, but instead of taking care of business, he becomes obsessed with Murdock. The one man he isn’t able to break. In a way, Fisk becomes the source of his own fall. It’s a real treat to see the brilliantly drawn close-ups of his face, to watch the realization dawn slowly in those beady eyes, the childlike, sadistic glee replaced by fear ;).

Of course, there is also Ben Urich – the Daily Bugle reporter who goes through his own cycle of fall and redemption. I appreciated that particular subplot very much; Daredevil is a superhero, after all, and we expect him to get up and fight. But Urich is just a man, a slim, frail, bespectacled middle-aged guy who finds himself over his head, in fear for his own life and the lives of those close to him. And yet, and yet… Why did you have to kill him, Netflix?!

And, last but not least, a few words about Mazzucchelli’s work. It’s an 1980’s graphic novel, there’s no question about it. The lines, the cadres, even the clothing and hairdos – everything says ‘80. But Mazzucchelli’s lines are bold and clear, and they complete the story perfectly, flawlessly evoking the madness, despair and hope that fill Miller’s narrative.

Daredevil: Born Again is one of the best graphic novels I’ve read. A riveting, emotionally exhausting roller-coaster with a realistic (as in “moderately happy” ;)) ending, leaving the reader awed and deeply satisfied. It’s an unfairly overlooked milestone in the evolution of graphic novels. A must-read.

P.S. The only thing that I found mildly irritating is very small and probably unnoticeable for most of people. But me being me, I could not help but wonder: what’s with the white socks fetish?

Matt Murdock even sleeps in them. And apparently doesn’t have socks in any other color.