I’ve read – and liked well enough (7/10) Michael J. Martinez’s Daedalus Incident, so it’s only natural to continue with the second part of his trilogy, The Enceladus Crisis. And the third one will follow, it’s still good and I want to know the conclusions of all the stories.

So we are back to a multiverse (duo-verse at least, and places in-between) where a hard sf reality of 2132 AD Earth meets steampunk, alchemy & sail-ships in space of 1798 AD alternative-Solar System. I’ll assume all the readers know the first instalment, if you don’t – well, I will limit the major spoilers (although heroes’ names alone will tell you, who the survivors of the previous books are), but remember it’s better to start at the beginning. 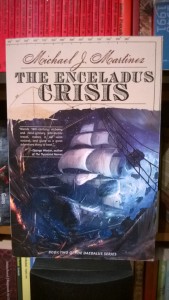 The world is still interesting. Solid sf on one side, something that might be taken from Clarke, if not Asimov, and creative sailpunk on another. The villain, and especially the opening scene looks again a bit pulp-ish to me, but in a good way. So – more of the same, and I applaud that, why change what’s working.

Major characters are all known, from Thomas Weatherby, through Anne Baker, Count de St. Germain, Andrew Finch to Shaila Jain. One of the new guys is someone you might’ve heard of – Napoleon Bonaparte himself. And there are more aliens, peaceful Elf-like Xan and their eternal and their seemingly extinguished enemies alike.

Yes, the good things are stuff we’re familiar with, so I will not repeat myself. The not so good stuff… it gets repetitive. Plot could be more original, less predictable. The good guys… should wise up by now, all the separate groups of them (and we have four this time, two in each dimension), fall for the same tricks time and time again. When they finally win, it’s less satisfying if you remember half their problems could had been easily avoided.

One thing that it stronger here than in previous novel – parallel worlds are clearly two pieces of one bigger puzzle, I didn’t have the feeling of reading two separate books I had for the bigger part of The Daedalus Incident.

Ultimately, what saves the book and allows me to keep the 7/10 score (I’d rather raise the previous one’s to 7,5 to show its superiority than move this to lower-than-7 bracket) is the simple fact that it’s still fun. I see it as an interesting, fresh combination of several genres that never claimed literary superiority, but always had their charm. It’s not epic, it’s adventure – and it’s a thrilling ride, for the most part. The book made me wanna read the final one. So – good enough middle part of a nice trilogy. The final instalment will decide how I see this trilogy as a whole.

One thought on “Michael J. Martinez, The Enceladus Crisis (2014)”