Piotrek: Deadpool! It’s been years since I laughed so hard at the movies. Even the opening credits were hilarious. And then it got better. Coming from the Fox/X-Men side of Marvel adaptations, it’s a little gem. A bit like Guardians of the Galaxy, but more… I don’t like to use words like adult in this context, so I’ll say foul-mouthed and graphic. A movie all 15-year-old boys would love to see (in secret from their parents), because with all its vulgarity it’s often juvenile. But still fun. Rebellious from start to finish, it pokes fun at our expectations, from the very beginning till the expected after-closing-credits scene (a very cool one!). The fourth wall is not only frequently broken through, it hardly ever exists 😉

Ola: Deadpool – the lovechild of Ryan Reynolds. Yes, the infamous Green Lantern, the wooden effigy of Hollywood pretty boy.  That doesn’t sound very promising, does it? But, surprisingly, it is a pretty cool movie. I know that the adjective “sweet” might not seem the first choice for a movie filled with ugly mugs, blood and farts (real or only imagined) and dirty jokes, but still, that’s the first one I came up with. It would be a nice Valentine Day movie for all comic book geeks and their significant others, the geeks would be bursting with geeky joyfulness and even their less geeky girlfriends/boyfriends could enjoy it.

“You’re probably thinking ‘My boyfriend said this was a superhero movie, but that guy in the red suit just turned that other guy into a fucking kebab.’ Surprise, this is a different kind of superhero story.”

Piotrek: 8,5/10 on IMDB (and instant top 100, although that will go down, it’s typical for a new movie to score very high initially), but only 65/100 on Metacritics…professional critics are snobs ;). But I’ll agree it’s not an instant Citizen Kane-level classic. It’s a very cool movie that gives us a break in a series of (also extremely cool) comic book adapting serious epics.

Ola: It’s funny, irreverent, juvenile… It’s so full of jokes that it doesn’t have much time for plot, but still – it doesn’t disappoint. If you go to see Deadpool you know you’re going for the sheer fun of it and the tongue in the cheek torrent of loosely connected gags, not deep reflections about the world or terrorism or freedom  (as what I kinda hope will be the topic of Captain America: Civil War 🙂 ).

Piotrek: Is it faithful to the original comic books? I wouldn’t know. Deadpool is a Marvel hero I’m not very familiar with. I’ve read one short story arc, Sins of the Past (from mid-90ties), and it was… not as entertaining as the movie. I’ve read it catches the spirit very well, and maybe I’ll get back to read more. Apparently it took some time for Deadpool to get this meta.

Acting is great, Ryan Reynolds is Deadpool (unfortunate Green Lantern from 2011, and they remembered to laugh at that also 😉 ), Morena Baccarin (of Firefly fame) is great as his girlfriend – and there is chemistry between them, it’s the best superhero-movie romance I’ve seen lately, way better than one from Ultron… Visiting X-Men are cool, especially Negasonic Teenage Warhead ( 😀 ). Antagonists aren’t that good (I’ve read some of them should have been Hydra, but Hydra is on the other side of divided Marvel movie rights 😉 ). Ajax and Angel are pretty bland, but not bad enough to spoil the fun.

It’s not about the story, but, for me, the story holds up. It’s a skeleton around which all the cool stuff is build. The drama in Deadpool is pretty standard, but that’s part of the joke. I have no problems with that, but maybe that’s the reason for the Metacritic score being so much lower than IMD’s vox populi.

Ola: I wouldn’t call Ryan Reynolds a good actor, not even after this movie – and it helps he wears a mask most of the time, believe me 😛 But he is a very good Deadpool, laid back and having fun, and it’s contagious. The bad guys… well, I agree with Piotrek they are rather bland and not scary at all, but again – they were not the point of this flick.

I’d argue Deadpool’s love interest is more known from her role of the unfaithful wife of captain Brody from Homeland. She’s better here, the chemistry is there, the love of fun is mutual. Moody Teenager a.k.a. Negasonic Teenage Warhead is perfect, as well as the ex-Silicon Valley best almost-normal friend of Deadpool. My heart however was stolen by Blind Al and her love for Ikea furniture…

Piotrek: Yes, well, IKEA should have financed the movie partially 😉 These scenes were hilarious.

Angry Joe sums it up – “it feels like I wrote this movie in my sleep”. And then talks about Alien 3 references. And how the movie calls him out as being old, for getting them. Joke within a joke within a joke… but was it mainly for fans? Definitely, it helps if you can catch the references, genre fans are thrilled, outsiders – less so. But everybody will have at least a few laughs. I’d recommend checking tvtropes’ trope list after seeing the movie. 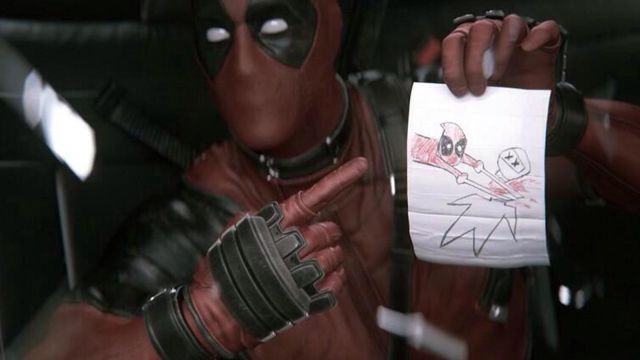 Ola: All in all, a very nice addition to the Marvel universe, but – beware – definitely not children-friendly. Deadpool is one of those characters who like children very much – boiled or fried, with a generous helping of ketchup.

A crossover of Mask and X-Men that works for those who are not fans of either… 🙂 And Stan Lee makes his appearance, which means its Marvel approved 😉

Piotrek: And the success of Deadpool gives us a chance for more R-rated superhero movies. As a guy over 30 I fully support that direction 😉

I’m sure I will watch it again, to catch all the jokes I’ve missed in the cinema…