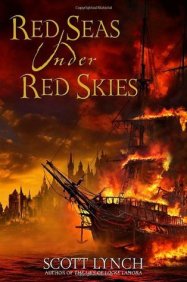 The second installment in Lynch’s Gentleman Bastard sequence, Red Seas Under Red Skies, poses something of a conundrum to me. It’s like Ocean’s Eleven once again – if you saw the movie you know it was made with one thing in mind, and one thing only: fun. Sheer, flamboyant and infectious fun. The movie was illogical, flimsy, with a few really lame jokes, and at times utterly dumb, but if you were in for a ride, you didn’t mind that too much. You just enjoyed it till it lasted.

Lynch’s book is exactly the same. The plot defies logic and treats rational thinking as its greatest enemy. It thrives on old clichés, reusing tropes and ideas from a hundred works of popular culture – from heist movies through Pirates of Caribbean to swashbuckling romances of The Three Musketeers’ provenience. Theft, love and betrayal, numerous fights, confidence games, and ambushes, peppered with a bit of social justice and justification. It written with verve and panache, with enough flair and confidence to almost convince you to its point of view. Almost.

So that’s the deal. You either let yourself be carried away with the story – or you don’t. Not very original, I admit, since every story ever made abides by this law. You, the audience, the reader, whatever, are on the receiving end of it. And the first choice you make is to either buy the story or not. My problem with Lynch’s book is that I bought it only partially. I’m happy to suspend reality from time to time – hell, in few very special cases I can even suspend logic. But there’s a limit to it – and Red Seas Under Red Skies surpassed that limit many times over.

We have two thieves let loose on a performance tour. Forced to leave Camorr, they decided to visit Tal Verrar, a place slightly more refined and catering to sophisticated needs of rich and easily bored people. A big casino catering to all tastes, where the fact on which floor you’re allowed to play clearly indicates your social position. A city of Elder glass, where a military power clashes with mercantile and both are under the thumb of Khartani mages. In the middle of their biggest-yet heist Locke and Jean find themselves recruited by Stragos – the head of military power of Tal Verrar. Stragos wants a new war, a conflict that would allow him to capture all the power in the city, to elevate him to the position of a dictator. And Locke, with Jean, are to give it to him. By means of pirate invasion. And so the mad dash through the seas and ships ensues, full of boardings, sails ho, summer storms and even a Heart of Darkness reminiscence. Which was surprisingly pleasing, by the way.

But yup, the plan of a pirate invasion was the moment the story betrayed me. Or I betrayed the story. My fondness for logic proved stronger than thirst for irresponsible fun of mad storytelling. The attachment to even a thread of logic was what prevented me from taking a head-first plunge into Lynch’s plot. I might’ve even liked it, it definitely looked amusing, not to mention that I’m a fan of the first three Pirates of the Caribbean movies, I loved The Crimson Pirate as a child, and so on… but no. Even though the characters on the open seas of Lynch’s world are very colorful, intense and many of them are quite believable, the change is too sudden and the link with the reality too fragile to take it seriously. A beautifully executed trick, a sleight of hand, but nothing more. Which makes the social justice/theft justification parts all the less savory. Unnecessary, and uncalled-for in a story about gold-hearted thieves. I guess that is the line Lynch will be pursuing in the future, to farther redeem his protagonists.

Moreover, Lynch can really write. The second book is better than the first in this regard. The prose is tighter (with the exception of the middle, again, where it sags under the burden of marine vocabulary; it’s as if Lynch decided to pound us with all the names of the ships’ rigging, sails and other nautical stuff, either sharing his passion or chagrin, I’m not sure :P), the action fast, spiced with sly humor, amusing allusions to popular culture, and a necessary, if predictable, bit of drama. The ending is bitter-sweet, with foes stronger than ever and a cliffhanger of moderate proportions; all in all, fitting. And I did get used to the fearsomely mismatched duo of the main characters. I might take a peek at the third installment of their story.

It all comes to the first – and final – question: will you buy it or not? I did, but only a little. And this is the reason I’m placing Lynch’s book in the pleasurable distractions section – it’s funny, enjoyable, all in all a decent escapist read :). It managed to slip through the border between medium and well done rating by a hair’s breadth – but it did.