Ok, so last week I ranted about Halloween and also reviewed Sheepfarmer’s Daughter by Elizabeth Moon. Book I liked very much for reasons then explained. So now, having finished the rest of the Deed of Paksenarrion trilogy, I feel like I should follow up.

I’m not enthusiastic about this task. 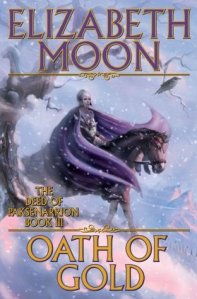 2nd and 3rd books are not bad, but slightly disappointing. The warning signs were there, but it could go either way. What happened is a transformation into something similar to good tie-in novels, Pathfinder Tales or classic D&D titles come to mind. Not bad, but not very demanding, mass produced fun for specific target group. In this case I’m in the target group, but after book one I hoped for more.

In the first instalment we had a young solder, Paksenarrion/Paks, learning her trade and learning about the world. She had the best intentions and certain simple-mindedness that we can find in children, village fools and paladins. And all was well, because the world gave us impression of being more complicated and ambiguous than our heroine. Now we learn that it really isn’t.

Sheepfarmer’s Daughter was a military fantasy, here we have sword & sorcery quest stories in a world that seems created for a rpg campaign. Rpg campaign I’d actually happily play. But it’s not the same as good literature. It’s too simplistic to be called that. If we go back to the question of whether genre lit is literary fiction, this isn’t. It’s good fun, great background reading for players designing their paladin characters. If you are serious, and want more than a warrior with limited divine magic – you can start here. But it’s not for everybody. Like with Laurell K. Hamilton – if you like wereleopard porn, go for it. Here – if you like traditional tabletop rpg and D&D tie-ins, it will be loads of fun. Or possibly if you’re devoutly Christian, but I’ll get to that later.

In the review of the first book I praised the single POV. It continues and as Paks learns more about the world, its intrigues and balance of power, the more we realize that it isn’t the Game of Thrones. The world is black and white. There are gods of good and gods of evil. Evil is stupid. Ambiguities of the first book get straightened out.

I don’t believe there is a single intriguing character apart from Paks herself (there are some likeable, and most serve their purpose in the story though). They are mostly a couple of stereotypes stitched together. Even the Duke. In the first books there where seeds of something interesting, here he is reduced to Good King cliche.

Elves loose their mystery, and as most stuff in here – the more we learn, tha more schematic it gets.

Political science is limited to the divine right of kings doctrine, and to choose the best ruler means to find a candidate with the best bloodline. Now I understand Moorcock’s laments that fantasy tends to be reactionary… 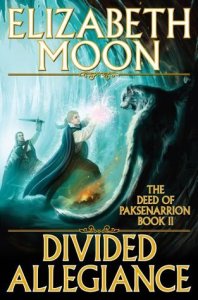 Second book, Divided Allegiance is IMO our trilogy’s weakest part. Momentarily it reads like a transcript of a rather predictable rpg session. We learn more about the elves and religions of Good, but momentarily it just gets boring. And it’s very stereotypical, if you know the stereotypes of post-tolkienian fantasy. I’ve enjoyed it more than Shannara books, but not much more. And than we have Paks’ fall from grace. I don’t want to spoil the details, it’s done a little clumsily and the motivations of the Evil are difficult (see – evil is stupid link), but the consequences are interesting.

Digression – see The Top 100 Things I’d Do If I Ever Became An Evil Overlord. It’s great. And certain evil gods of Moon’s world should have read it before setting up their plans. Common sense stuff, like “I will not gloat over my enemies’ predicament before killing them.” would have spared them their ultimate defeat 😉 And the good guys are not much better, most of the problems wouldn’t have happened if only everybody exchanged information on regular basis…

Some spoilers ahead, but nothing that would surprise a moderately genre-savvy reader is revealed, so don’t worry.

Book third is better. Paks’ fall from grace, her journey through humiliation, abandonment and self discovery and her subsequent sacrifice are what saves the trilogy for me. She is a paladin worth the title, not just a knight with divine magic. A Christ-like figure (spoiler! Jesus dies! but does he? and will Paks… ;)? ), selflessly choosing the good and hard over easy. Lawful good at its best.

Still, it happens in an unconvincing world.

You see, I believe in Paks. Her development makes her choices believable. She gradually got to where she is and we’ve witnessed every step. In an universe a tad more sophisticated it would matter more.

Subtract one if you really hate the kind of stereotypes I mentioned, add one if you love the traditional tabletop rpg feel…