A most famous Polish sf writer, author of philosophical tractates, a planetoid no. 3836, a Polish satellite, and a committee of sf writers working under orders from the Communist Party to gain control over the society (at least according to Philip K. Dick) – Stanisław Lem was all of those and many more.

His works have been translated to many languages, adapted to film and television (Lem’s most famous novel, Solaris, was filmed three times already), and sold in millions of copies worldwide.

His impact on science fiction is undeniable – not only because of what Lem wrote and predicted (e-paper, for example), but also due to how he wrote it. His prose is very precise, carefully planned, seemingly concise and distant, only to reveal at a second glance an incredible depth of emotions, breathtaking imagination, painful questions and even more harrowing answers about human nature and the Universe. It’s paradoxical, at times absurdly funny, at times depressing, almost always unsettingly convincing. And in many cases, it’s just utterly brilliant. I won’t hesitate to put many of his novels among the best of the best in sf, ever. Mulling over Lem’s more difficult novels takes as much time – or more – as reading them; and they stay with the reader for a long time afterwards. But Lem also wrote wonderfully funny, witty satires, little morality plays dressed up as fables, hilarious accounts of interstellar travelers, and twisted crime novels with no perpetrators. During his later years he turned toward philosophical essays, analyzing the significance of nanotechnology, AI, and virtual reality – but his most influential, and the best in my opinion, are his science fiction novels.

You can find a lot about Stanisław Lem on the Internet. I won’t repeat this info here, you’ll probably find it without much sweat – instead I would like to write a bit about his novels. I deeply admire many of them, I was strongly influenced by quite a few, and some of them have a very special place in my twisted, black, and jaded reader’s heart. And so the list below is incomplete and shamelessly partial, and includes only my favorites.

Hard science fiction, very plausible and slightly alarming, in an eye-opening way. The original Lem’s concept of necrosphere comes from this very book. It’s extremely difficult to write about this novel without spoilers – and the concept too great to spoil even a small part of it! Let’s just say that it’s about another form of evolution. And about a futility of the efforts to communicate with alien intelligence. And, as usual in Lem’s work, about human nature, the limits of human cognition, the prejudices and assumptions we unintentionally drag around with us – even to space. It should be bitter, but it’s not. As one of Lem’s earlier novels, it still keeps a sliver of hope for the possibility of redemption of humans, and a tiny bit of pride at human unpredictability, resilience and ingenuity. Every time I see a scene from Matrix: Revolutions, where Neo talks to the representative of the machines, I am reminded of this book. And I refuse to believe this scene a coincidence ;).

Lem didn’t have much luck with covers, but there are some great fan made illustrations by Alex Andreev – here’s just one for you to get a taste: 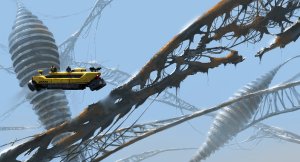 Again, Lem approaches the topic of the first contact with alien intelligence. Humans are finally given what they have been waiting for, for a long, long time – a coherent, intentional message from space. Its senders may be long dead, their entire civilization gone, but humanity is bent on deciphering it anyway. The novel concentrates on the scientific efforts in translating the message – and full of philosophical and scientific debates, questions of duty and conscience, long treatises on human nature. His master’s voice is thus very hermetic, surprisingly suspenseful, depressing and draining at the same time. It’s a difficult novel, which can be interpreted on many levels. Lem uses the alien message as a mirror for humanity – and in the end, the multiplying, contradicting theories about the signal and alien life forms say more about humanity than can be ever ascertained about the alien senders.

The final novel about the futility of contact with extraterrestrial intelligence and the last that Lem ever wrote. Fiasco is built from three seemingly separate stories – it starts on the Titan, the Saturn’s moon, where we meet again Pirx, a protagonist from a different Lem’s novel, Tales of Pirx the Pilot (described below). The main part of Fiasco is devoted to a scientific expedition to an inhabited planet – and humanity’s aim is to make contact with the alien intelligence. There are also fragments of another tale, retold on the spaceship Euridice – a tale about a meeting of civilizations in XVIth century South Africa, which stands in a peculiar juxtaposition to the main theme of the book. Fiasco is extremely difficult, thought provoking, depressive, harrowing… I was angry with this book for a very long time, and only later I realized how much Fiasco stayed with me. Apparently, even Lem was surprised by the ending [link in Polish] – but not unhappy with it.

In case you were wondering – yes, there is a second part to my list. And it will come next week ;). Otherwise the post would become much too long to read, and I would never wish to bore anyone with Lem!