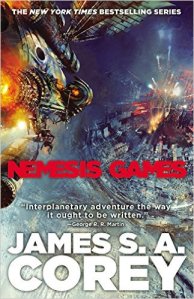 Nemesis Games, the fifth installment in the Expanse series, made me believe in miracles. Like Rocky Balboa, the two authors: Daniel Abraham and Ty Franck first achieved a huge success with their very good debut, followed by a decent second book in the series. Then they hit the bottom of terrible writing with novels no. 3 and 4, and now they have come back from there, writing a solid, entertaining and intriguing fifth installment. A miracle, no less. Writers who actually listen to their readers. Or maybe the upcoming SyFy series based on their novels gave them a new motivation? One way or the other, Nemesis Games almost gets back to the level of Leviathan Wakes, and I for once am quite happy about it :). 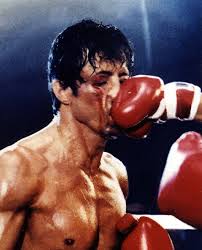 The latest novel in the Expanse series for most parts seems almost intimate. There are no new worlds – thankfully, one might add, as we know already that creating them is not Corey’s forte. Instead we get a very detailed and nuanced portrait of every crew member of Rocinante – from Holden and Naomi to Amos and Alex. Each of them is given their own POV – and that means a distinct voice, an often secret past, and a developed unique personality, which is something the readers have long been asking for. We don’t learn much new about them – mostly we confirm the intel gathered from previous installments – but still it’s nice to hear Alex’s or Naomi’s voice. The favorites from previous books are all flocking to Nemesis Games as well – from Fred and Avasarala to Bobbie and even Clarissa – although the latter is still a rather two-dimensional poster of a girl than something real.

There’s also a very complicated political plot, full of divisions, factions, betrayals, armed and lethal forces fighting for what they believe is their own survival – and this time it all seems plausible. The OPA – Outer Planet Alliance, is falling apart. Not unlike IRA, it finds itself in a moment of crisis once it gets its own voice in the big politics and when it is clear that violence as a means of conflict solving becomes obsolete. But does it really? A splinter faction of OPA decides it’s time to raise the stakes and do the unthinkable – attack the inner planets. The way to do it has been mentioned so many times in the previous books that when the attack comes, it’s not even remotely surprising. Like the Chekhov’s gun, shown in the first chapter and going off in the third.

And that’s the major letdown of the book. A catastrophe happens; a genocide on the scale earlier thought impossible – not because of technical problems, but because of its moral weight. We see it through the eyes of the book characters, some of which are in the center of the attack – and it leaves us untouched. No emotions: no regret, no grief, no trauma – not even a sense of awe at the enormity of it all. It’s just a part of the plot, nothing else.

I realize that the Expanse series is something of a pop sf. Not too difficult, not too complicated, but thoroughly entertaining and written well enough to be absorbing. Themes like trauma, grief, or even genocide don’t mix very well with something designated as an average page turner, a book consisting in equal parts of mystery, horror and thriller. I get it. But if that’s so, why even try? This half-hearted attempt makes me question the intentions of the writers. If you write about something so big, at least get through with it and write solidly about all aspects. Don’t treat it as a stepping stone for the actions of your characters because that seems rather soulless.

That said, I enjoyed the interplay between past and present of some of the characters. Even though rather predictable, it still was nicely fitted into the bigger picture, creating a sense of continuity. I liked Naomi’s story and even though I blew some exasperated breaths while reading, I was still engrossed in her POV chapters, as well as Alex’s. Holden is a known at this point in the series, so his chapters got some welcome additional action and were still interesting to read. What I didn’t like was the new bad guy. His portrait was done in the justly frowned-upon manner of “tell, don’t show” and it was impossible to believe that he really was so dangerous as all the characters claimed him to be. The fact that the Butcher of Anderson Station compared him to Alexander the Great was really laughable.

I also didn’t like Amos’ POVs. Okay, from previous novels we already knew that Amos is a very basic creature, judging all the world according to the “fight or flight” stratagem. He doesn’t have any emotions of the higher order, he is a cold-blooded killer, but because he still is a cherished part of the Rocinante crew, there’s never nothing wrong with it. He’s a monster, but he’s our monster. That makes it ok. This has bothered me from the start and I had hoped the authors will use the chance of separate POVs to make Amos something more than a two-dimensional action hero. I was wrong. In Nemesis Games, Amos’ two-dimensionality is only enhanced and emphasized. We get into his head, but that’s a rather empty place. We learn about his past, but that’s also a rather forgettable story. Amos consistently shows only two emotions: anger and loyalty. He also has a will to survive, but not on a conscious level – it’s rather something that just happens. I found it more and more difficult to relate to this character in any way.

Last but not least, the ending. I have known before I read Nemesis Games that it’s not going to be the final book in the Expanse series. If I haven’t, I would be really unpleasantly surprised – the fifth installment ends in a rather sloppy cliffhanger. What I mean by “sloppy” is that the main story arc doesn’t have any resolution and consequently looks like an elaborate setup for the next part. It shows that the Expanse series follows a popular pattern of a bestselling serialized story – the TV series, contract for a doubled number of books than originally planned, the cliffhangers are all part of it. But the state of the book market is an entirely different story, one that we’ll cover another time :).