Yes, it’s Wednesday and I’m back from vacation 🙂 Time for a review! 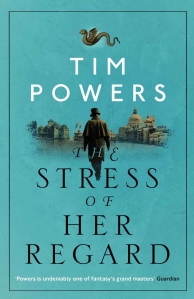 Tim Powers doesn’t write much, and even though he started writing a long time ago, back in seventies, the list of his novels is rather short. His most known novel is Anubis Gates. Have you heard of it? I haven’t, till a few months back ;). Powers is not a very well known writer, but after reading The Stress of Her Regard I believe that this is a problem that should be remedied as soon as possible.

Why? Because The Stress of Her Regard is an exceptional book. Intriguing, fascinating, visceral (literally!), terrible and amazing, and written with remarkable precision. The real and the fantastic are joined together seamlessly, which is all the more astonishing because Powers bases his books on real past events. He focuses on a certain point in time, on certain real, famous characters and the real events that they have taken part in, and around those historical facts he builds a fantastical story. In short, he artfully supplies us with a supernatural cause of historical processes and occurrences. In The Stress of Her Regard the real background are political events in Europe in the early XIX century – and in that setting we become witnesses to the lives of English romantic poets: Shelley, Byron and Keats. According to Powers, all their obnoxiousness, weirdness and irrationality should be ascribed to the fact that all of them were victims of another sentient race on Earth – the nephilim, a vampiric form of life based on silicon instead of carbon. Our guide in this subtly altered, subverted world is Michel Crawford – a Navy doctor, obstetrician and a fellow nephilim victim. We see the world through his eyes, and we witness up close all the temptations, rewards and costs of vampiric addiction.

Powers’ nephilim are not your regular vampires; they are very old, much older than humans; they are Lilith’s children, giants rendered immobile and harmless only after some cataclysm or supernatural intervention changed the qualities of sunlight on Earth. I’m not going to spoil all the details – finding them out is a big part of the uniqueness of the reading experience that is The Stress of Her Regard. I was totally enthralled. And I even don’t like Romanticism. And still think of Byron as a total buffoon.

Any of it sounds a bit weird? It definitely should; I haven’t even really started giving you all the juicy details of glass eyes filled with minced garlic, of sewing stone figures into your abdomen or chewing off your own pinkies. Yup, all of it is there. Horror, gore, poetry, true love, intestines, rooster heads and human hearts in a butcher’s paper.

I feel I should put here a tiny disclaimer: The Stress of Her Regard, and apparently all other works by Powers as well, are rather unforgiving to an unprepared reader. Powers is an erudite; before he starts writing, he does a thorough research that should be a source of eternal envy for every scientist. He studies dates, occurrences, letters, actions – everything that can be found about the time and people he focuses on. And only after he’s got all the strings in his hand, he starts looking for a totally crazy explanation to all inconsistencies and weirdness and coincidences there are – and they are there, to be sure. I will refer to Powers, who says:

I find that I absolutely need research. When I was first starting out I thought you could write a story and leave gaps, for color or something, which you could subsequently fill by doing research. But what I’ve discovered is that until I read the daylights out of some situation – the place, the people, even the restaurants – I don’t even have a clue what the plot might be. […]I’ll read at random until I find a couple things that make me stop and ask questions: “Wait a second. Why did he really do that? That doesn’t make any sense.” You get three or four of those, and you ask what explanation might be perfectly concealed under these three or four things. And because of all my childhood reading, all the explanations tend to be, “Oh, I bet dead guys are behind it!”

Once I’ve figured that much out, the research can be more focused. And pretty soon, it becomes an exercise in resisting paranoia because you’ll find that your research genuinely does seem to support whatever goofy theory you’ve come up with.

Yes, you could say that his books are beautiful, schizophrenic cases of conspiracy theories. And they really work! 😉 In this aspect, Powers reminds me of Foucault’s Pendulum by Umberto Eco; Powers could very easily be one of the characters of Eco’s book. Hopefully, he won’t end up like Belbo.

All in all, The Stress of Her Regard is a noteworthy book. It’s something refreshingly different, out of any genre divisions, old enough and weird enough not to be swept away in some big tide of shiny vampires or urban fantasy ass-kickers. It’s written well, in a measured, rich English; after a slow beginning the pace picks up and in two-thirds of the book I was hard-pressed to put it down. There are some weak points in Powers’ logic, not everything is quite seamless and some decisions seem forced in order to get the story arc where it should be – but it’s something easily forgivable in the face of all the fantastic weirdness Powers puts together in his wild tale. Plus, we meet Francois Villon! 😉