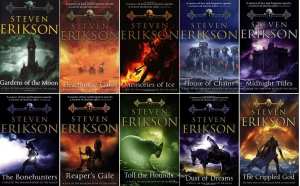 The Malazan Book of the Fallen, one of the milestones of contemporary military fantasy, and fantasy in general, is great – in many aspects of this word. First, it is lengthy: ten big books, together some 3.3 million words (suck it up, George R.R. Martin!), and populated with an enormous cast of characters, many returning, some showing only once, but all of them unique and multi-dimensional. The series starts with Gardens of the Moon, but beware – as a reader you will be thrown into the thick of it, without a word of explanation. You will have to piece together the events, its causes and results on your own, without any help, and it’s going to be difficult. This is not an easy read. Once you’ve succeeded, you will have to take sides, as some of the characters will do their best to steal your heart and mind. And this may prove even harder. Because nothing in Erikson’s world is simply black or white. Nor should it be. Steven Erikson, or Steve Rune Lundin (that’s his real name), is an anthropologist and archaeologist – and, as adepts of the queen of all social sciences, we can readily claim him as our own 😉 And his scientific background proudly shows up in his novels.

Secondly, the scope of the Malazan Book of the Fallen is enormous. The novels develop a fully realized world, filled with epic struggles on big and small scale, and events capable of changing the fate of the nations, races and worlds, all culminating in a breath-taking climax. This world was created by Steven Erikson and Ian C. Esslemont back in 1980’s as a backdrop to their GURPS games, and only afterwards was used by the pair to create a very complex storyline, told in two series of novels – one created by Erikson, and the second, consisting of six books, by Esslemont. In this world humans coexist with other, older races, some indigenous, some coming from other dimensions or worlds – among them is a race very closely resembling Neanderthals, and one – intelligent dinosaurs. And there’s absolutely no trace of kitsch or camp, which is an achievement in itself.

Thirdly, it’s written with rarely seen mastery. The first book, Gardens of the Moon is slightly lacking in this particular aspect, but since it was Erikson’s debut, these deficiencies should be easily forgiven. The remaining nine of the books effortlessly juggle many stories, POVs, perspectives and time and space planes to create a multi-dimensional account of events. The characters on the pages seem alive, and are given a hell of a life, really. Full of no-win situations, terrible decisions to make, bloody fights, heartbreaking losses and unforgivable choices. But that’s just life when you join a conquering army and go to war with very angry gods.

Lastly, Erikson doesn’t shy from difficult problems, from racism, sexism, xenophobia, through fanaticism, abuse, violence, to murder, or even genocide. He explores them to the fullest extent, showing their sources and outcomes, juxtaposing them with the brighter sides of humanity/other-racity 😉 and, in the process, giving his own answer to the question of what it means to be human(e). Erikson is unrelenting in showing the realities of life, whether we like them or not, but at the same time he has a lot of understanding for the struggles of man/woman/inhuman/any other conscious being.

The world of the Malazan Book of the Fallen is in many aspects co-created by a very complex system of magic, seamlessly joined with the mundane aspects of the world, so that it’s really difficult to say what is uncanny and what is the norm – which is, in my opinion, simply beautiful. This is one of the few stories where exploits and decisions of regular, non-magical people (or not people, when it comes to that) are valued as highly – or even higher – than the special, magically talented ones.

The Malazan Book of the Fallen is, true to its name, a tale about people in the war. In many wars, fought on many continents throughout many years, seen through many eyes and lived – or died – through many lives. It’s heart-wrenching, laugh-out-loud funny, terrifying, harrowing, disgusting, elating, awe-inspiring – all the faces of war are there, shown with devotion to truth, with compassion and deep appreciation. And this, in my book, is the highest praise a military fiction can get.

I wouldn’t be myself if I didn’t have some tiny critical remarks ;). I very much didn’t like the second half and the conclusion to the story arc of Onos T’oolan and his family. I found it unnecessarily brutal and, at the end, unrealistically sweet and happy, as if a Hollywood-type sweet-as-molasses ending was needed. It was not. It didn’t give me any kind of catharsis (and from Erikson’s interviews it seems that’s what he was aiming for), only irritation. Karsa Orlong was a controversial character for many readers, and I also had my doubts about him, at least at the beginning – but I very much enjoyed the evolution of this particular character. It was believable, bitter-sweet and thought through. And that’s about it – all the rest was a sheer reading pleasure alternated with a rather terrifying, mind-blowing experience.

I’ve literally devoured the Malazan Book of the Fallen. It was back in times before I’ve read Cook (an important inspiration for Erikson) or Tchaikovsky, before some of the books from Erikson’s cycle were even published. That may have influenced my opinion, but even so, only slightly. I’m quite sure of it because I’ve recently come back to the first two books and found them as engrossing and captivating as before. And as emotionally wringing as before, which is why I haven’t read the entire sequence for the second time yet 😉

There is one main story arc winding through all ten books (even if in the first two it’s not necessarily visible), and conclusion to it is really superb – the last book, The Crippled God, is a fantastic finale, finishing many of the important threads but leaving enough mysteries to satisfy even the most demanding reader.

And one last remark – I’ve read some of the books of Ian C. Esslemont. He may be a great guy, but he’s not a good writer. I’m not entirely sure what is the relation of both series – I’ve read that they are separate, because both writers agreed upon dividing the cast of characters and concentrated on writing about their favorites (e.g. the Crimson Guard is Esslemont’s specialty), I’ve also read that both series are equally canonical. I was flabbergasted with the Assail, the final novel in Esslemont’s series – and not in a good way. I found it terrible. And I hated what Esslemont did with one of the main characters from the Malazan Book of the Fallen. So – a word of warning. If you are a Malazan Book of the Fallen fan, don’t let yourself be lured into reading Esslemont. It’s absolutely not the same.