Is fantasy proper literature? That topic was already analysed here, inspired by discussion around Ishiguro’s “The Buried Giant”. The answer was, of course, yes. Original post is in Polish, but a very interesting debate featuring Gaiman and Ishiguro – was hosted by the BBC. Personally I find efforts to exclude genre literature from “proper literature” laughable. As with modern art – some snobs believe that if you enjoy something, it can’t be “real art”.

Recommended reading for today is another author’s attempt to prove that real art it is. A successful one. Stephen R. Donaldson writes about his works, and Erikson’s series, in a text in “The New York Review of Science Fiction”. Go and read him, I’ll just make some introductions.

Donaldson himself is an author of acclaimed “Chronicles of Thomas Covenant the Unbeliever”. Difficult series. With, probably, a protagonist readers are least likely to like in all fantasy. At least till the latest flood of grimdark. Thomas does some unforgivable things that can not be excused by the hardships he endured in his life. Being weak and persecuted does not make him good. It’s epic, but bitter, and as our hero learns some harsh truths about himself, we learn unpleasant things about humanity. It’s a story of Rubicons crossed, destroyed innocence, the cycle of suffering in fantasy realms that are… pretty schematic. Worldbuilding is not the main focus here. I’ll let Stephen Donaldson speak for himself:

the characters meet themselves—or parts of themselves, their own needs/problems/exigencies—as actors on the stage of the story, and so the internal struggle to deal with those needs/problems/exigencies is played out as an external struggle in the action of the story. The villain of the piece, Lord Foul, is a personified evil whose importance hinges explicitly on the fact that he is a part of Thomas Covenant. On some level, Covenant despises himself for his leprosy—so in the fantasy he meets that Despite from the outside; he meets Lord Foul and wrestles with him as an external enemy.

Nevertheless, critics who sneer at fantasy take a personification like Lord Foul as proof that fantasy is simple-minded escapism. Any fiction that presents evil as something out there rather than something in here defies what we all know to be true about human nature. But such criticism misses the point. In the Chronicles as in many other examples of contemporary fantasy, “the entire out there, with all its levels and complexities and dimensions, is an externalization—for dramatic purposes—of what is in here.” (Again, that’s from “Epic Fantasy in the Modern World.”)

It isn’t escapism because none of the characters escape from themselves. Nor can either the writer or the reader. The real journey is inward as it is in every enduring work of literature.

I agree and I recommend Donaldson. It’s not for everybody though, and I see where reviews like that one are coming from:

“the beginning of this massive, epically derivative fantasy masturbation-fest about the least likable person who’s ever existed continually making awful choices and refusing to see how he’s a total baby “.

Thomas is not a typical anti-hero, strong, mysterious and morally complicated. He is weak, complains all the time and makes all the wrong choices. It’s hard to feel sorry for him. And yet I believe that the author achieves his stated goals and the books are worth reader’s time. Proper review might come after I finish the entire series.

Steven Erikson’s “Malazan Book of the Fallen” is perhaps the greatest fantasy series I haven’t yet read. Ten books (not counting the spin-offs), over three million words. Military fantasy that originated from rpg campaign. But the first volume is hard to get into, I got distracted after 50 pages. I know that I will almost certainly enjoy it, so I’ll get back to Erikson, maybe after finishing entire “Black Company”… 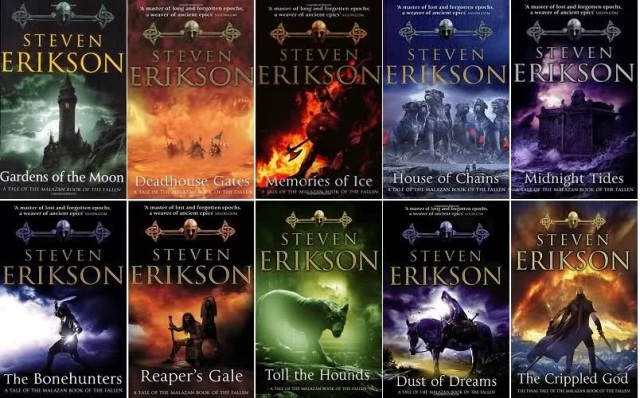 What Erikson seems to have in common with Donaldson (in this interpretation) is that he seeks to unsettle readers by defying fantasy’s tropes and unsettle their preconceptions. Good deeds are seldom repaid in kind, characters are not what they seem to even experienced genre-readers, and yet apparently there is some conclusion, resolution of conflicts that satisfies both Donaldson and Erikson fans that recommended his books to me. And there seems to be some poorly-veiled social commentary, popular thing these days.

In the final part of the article we have post-modernism, Carl Sagan and even some optimism 🙂

It’s good to read a text like this from time to time, lets one see all this reading as something more than a way to pass free time 😉

One thought on “Donaldson, Erikson, fantasy as fully-fledged literature.”