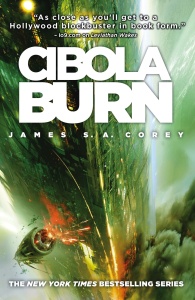 I’ve mentioned before that the fourth installment in the Expanse series gets better than the terribly weak third. I was wrong.

Well, not entirely wrong – there are moments when Cibola Burn gets the breath and panache of the first two installments, but these are few and far between.

But let’s start from the beginning – where, in the light of the big events ending the previous book (which I won’t detail here ;)), passengers from an old decrepit ship fly to a habitable world and, in violation of all international laws, settle there. This wouldn’t be a problem, if not for a scientific expedition sent by a big bad Earth corporation, which goes to exactly this same world. Of course, inevitable fight ensues and bodies drop dead right and left. Surprised? You shouldn’t be. When humanity gets a chance to reach the stars, every single living soul wants to squat on the same rather uninteresting planet and fight for scarce resources. That’s how humans roll. At least according to Corey.

So, it’s Wild Wild West once more. No laws, just teeth and claws. Galactic ships on the orbit, armed forces down the gravity well, and lots of very frustrated people who think they can do whatever they damn well please. Obviously, this new Wild West needs a sheriff, and fast. And that’s precisely where Holden and Rocinante come into play.

Once again, Holden is over his head in trouble. On the surface of the planet wait for him all those angry miners with almost unlimited access to explosives, together with a cartoon villain who doubles as a head of security for the scientific expedition, and, of course, a really unsettling apparition who evidently wants something from Holden. Plus, the planet was morphed by the previous owners to a truly frightening extent and right now goes through some serious system failures resulting in [spoiler!] half of the planet literally blowing up and flooding the second half where the first human settlement is located. Crises abound!

It all sounds interesting. Brave new world, completely different flora and fauna, lots of opportunities to show all the flaws and virtues of humanity and all the lures and dangers of another, faraway planet. So what went wrong?

I will start with the lighter offenses.

First of all, the majority of Cibola Burn is boring. The new world on the other end of the Universe resembles boring parts of Earth so much that there’s literally no space for awe or amazement. One slightly intriguing species is a rather underwhelming achievement when you have a whole planet to play with! Once again, the novel is populated with one-dimensional and redundant characters, for whom I honestly don’t care and, in the result, I am unable to root for them. The only exception is Dmitri Havelock, Miller’s former partner. We also meet again some of the people we have met back in the book no. 2, and the mystery of naming one of the male characters Basia is explained in a fun, tongue-in-the-cheek way which makes you almost believe it was done on purpose in the first place ;).

What was supposed to be gray and without limits very quickly becomes black and white. I have a serious suspicion that the authors harbor a grudge against higher education. All the educated people are lacking, in want for a stronger word, and this time the engineers get the stick. Apparently being moored on the orbit makes them go all jingo, playing with guns and becoming totally irresponsible. Scientists in the book all have two left hands and are unable to do anything productive, and saving the world once again falls to Naomi Nagata, who actively refused pursuing a PhD degree.

I got only slightly annoyed that in the whole wide Universe there is only one sinister color: black. Whatever bad happens, whatever alien evil lurks in the corners of the interstellar expanse, you can bet it’s black. First rule of survival: if the object is not black, it means it’s not bad.

And the capital offense, sexism. If you want a perfect example of sexism in a s-f book, you need not look any further. One of the main characters, who got her own POV, is Elvi Okoye. She has a PhD in biology and coming to a new distant planet is for her a dream come true. She is very smart, observant and dedicated to her goals, immersed in her science so fully that she even dreams of it. And then she meets Holden. What then a young, pretty scientist can do? She falls in love with our main protagonist so desperately that she no longer is able to do what she does best – science. Even in the face of total annihilation she can only think of muscular arms of the savior of the humanity. As Elvi, for the reasons known only to the authors, is the only one who can discover the cure for a debilitating sickness among the pioneers, the Holden conundrum must be solved at all costs. The solution is very simple: she must get laid. One quick number later she’s as good as new. Another few hours and she discovers the cure for the mysterious sickness – and all settlers are miraculously saved from blindness! Wow. Just wow.

No to paint the picture all in black, the main ending of the book four is decent and sets the stage for the grand finale, even if it is somewhat predictable. Frankly, the best part of the book was the epilogue, and that one fact says a lot about Cibola Burns.

I may be a bit harsh with Cibola Burns. It is, after all, an almost decent s-f novel with a very interesting main theme. It’s just that Cibola Burns, as Abaddon’s Gate before it, simply doesn’t reach the commendable levels of the first two installments in the series. It’s another proof that, if you have an idea for three books, you really shouldn’t stretch it too thin just to get five books out of it. Actually, 9 books, as I have recently learned! :O

I will still read the fifth book, because I have an inexplicable soft spot for Miller and the Rocinante crew, Bobbie and Avasarala. I’m not sure, however, if I manage to read four more – I’m really not sure if I want so much to know how it ends. The main plot arc is really good: how humanity can reach the stars is an excellent – and valid – question. Corey’s response is fun and intriguing, and at least definitely better than Nolan’s Interstellar. But the execution of this idea is, up to the fourth installment, really sloppy – half the time good, half the time terrible.