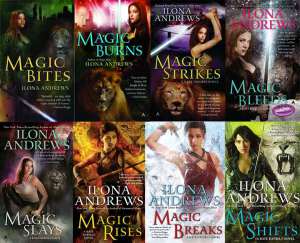 Since we’ve already entered the wide expanse of urban fantasy, the time has come to look a bit at the works of Ilona Andrews. Ilona Andrews is a pen name of a married couple: Russian immigrant Ilona and her husband Gordon, a former communications sergeant in US Army. Why is it so important to know who they are? Because their background deeply influences the content of their books.

The most well-known series – and the one that has been in part translated to Polish – is Kate Daniels. The eighth book comes out in August, there are also some tie-ins and novellas, and a slew of short stories. And it’s still a work in progress, with at least two novels planned. In short – a lot. Theirs is a big and brave new world, where magic and technology compete with each other, flooding the planet in alternating waves. When the technology has an upper hand, guns and cars and telephones work perfectly well. There’s electricity and computers. When magic gains eminence, there’s monsters. Spells. Buildings crashing down. And a lot of hand-to-hand combat.

The series starts with Magic Bites. We meet Kate Daniels, the main protagonist, in a difficult point of her life. She’s a mercenary in a Guild of professional monster-hunters, and she fights with a saber not only all the fights that her mouth puts her in, but many more. She keeps a low profile – due to a complicated past, but mainly because of her magic, which targets her as a prey for even larger predators than she is. However, soon some tragic events force her hand and she is compelled to join the Order of the Knights of Merciful Aid, a Templar-like organization, to solve a mystery murder of her former guardian. In the process Kate gains some well-deserved notoriety among the paranormal movers and shakers of Atlanta: vampire masters and the Pack – a paramilitary organization of shapeshifters. Inevitably, there comes the ass-kicking, mouthing off, slow uncovering of the troubled past, deadly traps and so on. All shown from Kate Daniels’ POV, as she’s the sole narrator of the story. Quite sarcastic, at that, which is a big plus in my book.

Sounds like we’ve had this before, many times. So what sets Kate Daniels apart from the rest of generic urban fantasy?

First, worldbuilding. The world created by Andrews is gritty, realistic (there are some irritating exceptions to this realism, but they can be excused by the necessities of storytelling), well thought through. It’s mainly post-Apocalyptic US, but one book takes us to European Georgia. There are some rather novel ideas – starting with vampires, who are living husks of humans infected with vampiric virus. They have no conscious mind of their own and are simply vehicles, sort of talking armored humvees, or drones, for their navigators – vampire masters, humans with affinity to vampire magic. There are all sorts of technical equipment made solely for the purpose of measuring and understanding magic, such as M-scan, a device showing in different colors the type of magic wielded by a person. Or a monster. Or a god. There are some really nice weapons, designed especially for fighting magical creatures, when magic is up and guns or more advanced bombs simply don’t work. There’s also a lot of gleeful destruction of Atlanta – very rewarding, whether you live there or not J.

Second, humor. The novels are funny, ironic, sometimes deliciously, wickedly hard on their protagonists. Even the darkest moments – and there are some, quite brutal, sometimes unsettling – are lightened up by a dose of black-ish humor. They are also not very politically correct, not like, say, Mercy Thompson series, which is refreshing. And, last but not least, they profit a lot from Ilona’s different perspective of the world and the American society.

Third, evolution of characters. Agreed, in the first novel Kate can be seen as rather irritating and two-dimensional. But as with Dresden files, the reading experience really improves with each next novel. The characters are becoming well-rounded, deep, with varied and believable motivations. They are given their past, as well as their future hopes and dreams, and lots of hard decisions to make. And the relations between them are plausible as well – slow burning, slow changing, but always being one of the main driving forces behind the events. Of course, there’s the necessary dash of romance, a bit of sex – but don’t expect it too soon – it really starts with a third or fourth book in the series ;).

Forth, reality of fights. I’m not a swordswoman, or a martial arts expert, so my experience in how a fight should look is entirely on the passive viewer side. But Ilona Andrews describes the fights in a gritty, realistic manner; they are well paced and depicted in vivid, suggestive way. They are very brutal – severed limbs, fountains of blood and funny-smelling goo, teeth and cartilage are literally flying. There are times when the brutality feels a tad undeserved and could easily be toned down without taking from the story, but that’s licentia poetica, I guess. In a savage post-Apocalyptic world it’s teeth and claw, my friends. And the fittest – and most ruthless – will survive.

There’s also the Cover Curse. Andrews have terrible luck when it comes to covers. There’s really not one which I like, in all the series they write (maybe with the exception of Clean Sweep/Sweep in Peace, but these are self-published) – and that’s why I buy their books on Kindle, so I don’t have to look at them. The covers are sadly in what amounts to a typical American low-budget style – pictures of models, changing every few books, not one of which truly resembles the protagonist.

But don’t be mislead by the covers. It’s a great leisure read, fast-paced, funny, adventurous and gripping. Don’t expect depth and philosophy, but expect to be immensely entertained.