“There’s a time and place for everything, and I believe it’s called fan fiction.”

Yesterday I got a message that my favourite WIP* fanfic was updated and it made me want to finally tackle one “meta” topic I wanted to explore since the beginning of our blog. 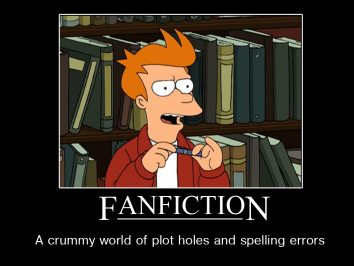 Lets start with a definition from our trusted TvTropes:

Fan Fiction is a form of Alternate or Expanded Universe created by the fans of a work, rather than the work’s original creator. Fan Fiction, or “Fan Fics” as they are often called, are written for several reasons: To continue a story that ended prematurely, to see what would happen if certain characters are placed in unusual situations, see what happens when the characters of one franchise encounter the characters of another franchise. Or sometimes to get the characters to have mad passionate (or occasionally just mad) sex with each other.

So… basically, fan fics are stories of various length (from a few sentences to a couple million words) written by amateur authors and taking place in universes of professional author’s works.

Is there a clear border between fanfiction and literature? Besides one obvious – between people getting paid for their writing and those publishing stories on the net with disclaimer “I own nothing, I just play in JK Rowling* sandbox”

Artistically there is a continuum, from mostly original works (nothing is wholly original, we all stand on the shoulders of giants) to “Pride and Prejudice and zombies” – which basically is a fanfic, only of a public domain work. All literature is a dialogue with its predecessors, even if in more subtle and sophisticated ways of literary fiction.

Quality varies. There are horrors out there, things I’ve read by mistake that can never be un-read. Horrible stories written by people with only rudimentary knowledge of English and none whatsoever of creating characters and stories. But, let’s face it – there are some god-damn awful books published on traditional market. And I’ve read plenty of fan fics way better than, say, this crap.

“Fanfiction is what literature might look like if it were reinvented from scratch after a nuclear apocalypse by a band of brilliant pop-culture junkies trapped in a sealed bunker. They don’t do it for money. That’s not what it’s about. The writers write it and put it up online just for the satisfaction. They’re fans, but they’re not silent, couchbound consumers of media. The culture talks to them, and they talk back to the culture in its own language.”

Fanfiction is a bit like alternative history. Frowned upon by professionals, but a product of deep passion and intimate knowledge of the subject. To be done correctly, it requires far greater understanding of the subject than just reading a couple of books about what really happened would give you. You need to understand why it happened exactly that way and how probable where alternative outcomes. In my favourite II World War alternative storyline there are pages upon pages of discussion, what would change if slightly different version of engine was put into Spitfire fighters. By people who know their stuff. And to write good fanfiction, best of the authors read their beloved books dozens of times.

And, like with alternative history, we all have our theories. What if Poland bowed down to Hitler’s demands in 1939? What if Americans lost their war for independence? What if Harry Potter had a passionate relationship with Severus Snape? Ok, sorry, let’s try to delete the mental image we have after the last one. There are thousands of stories like that, but that’s not my kind of fanfiction. So, let’s say… what if Harry Potter was sorted into Slytherin? It was close, even in canon*.

*canon – original work, author’s source of inspiration. JKR’s HP, most of the time.

Most of the time, fan fic’s authors mess with their favourite books (movies, computer games etc.) to create a new story. Sometimes they fill in the gaps – what was Sirius up to, when Harry was at Hogwarts? Sometimes they change major plot points.

“I adore the way fan fiction writers engage with and critique source texts, by manipulating them and breaking their rules. Some of it is straight-up homage, but a lot of [fan fiction] is really aggressive towards the source text. One tends to think of it as written by total fanboys and fangirls as a kind of worshipful act, but a lot of times you’ll read these stories and it’ll be like ‘What if Star Trek had an openly gay character on the bridge?’ And of course the point is that they don’t, and they wouldn’t, because they don’t have the balls, or they are beholden to their advertisers, or whatever. There’s a powerful critique, almost punk-like anger, being expressed there—which I find fascinating and interesting and cool.”

(Second quote from Grossman’s Time article… highly recommended reading. I don’t won”t to repeat him, so go there for some historical background and interesting analysis of the phenomenon).

Not everybody loves fan fiction. GRRM hates it: “Every writer needs to learn to create his own characters, worlds, and settings. Using someone else’s world is the lazy way out.”. Ok, there’s something to his argument. But compare it to Grossman’s enthusiastic description… I’m with Lev.

Why are Rowling’s books the most popular source of inspiration? Harry Potter series shaped a generation of young readers, growing with their heroes and their increasingly complex and mature adventures. But the saga ended, and its readers where still growing up. So, some of them created their versions of HP, more suitable for twenty-somethings. Sometimes with interesting results. Sometimes forgetting how young Harry and his friends are, often we have stories more suited to college environment. That’s why Lev Grossman’s “Magicians” where taking place at college-level school of magic. But still – we have thousands novel-length HP fan fics. Infinite monkey theorem comes to play. Some of them are bound to be good.

That being said, most fan fics rely on a very limited pool of tropes used time and time again. There are genres an subgenres and sometimes a few words are enough to show an experienced reader whether a story is worth his time… slash*, multi, fix fic, self insert, revenge fic, Peggy Sue, hate fic, troll fic… look them out on TV Tropes. Hint – stories that can be reduced to a few tags are usually not worth reading.

* slash means stories featuring gay relationships of characters known from the source material. As Grossman explains in the article linked above, stories about Kirk having sex with Spock where the founding stones of fan fiction…

And there is this crazy obsession with so-called shipping. What does it mean? Well, sometimes fans know better than author who should end up with whom in their favourite book. THE most famous example is HP, again, with significant number of people preaching Harmony theory (Harry and Hermione were created for each other). Again – stories created solely to share their author’s vision of Harry and Hermione’s wedding aren’t worth your attention, most of the time.

An sometimes one universe is not enough. Imagine Harry Potter in Marvel Cinematic Universe. Harry Potter in Westeros. Or Buffy in Hogwarts 😉 It’s hard to merge different realities into a new, believable universe, but if done right… it can be loads of fun. I’ve rad a HP/Anita Blake x-over way better than late Hamilton’s novels. Arguably, it wasn’t that hard to do 🙂

Some people write fan fics for fun, some aspire to become pros themselves, one day. Some succeed. I have some decent DLP short stories anthologies on my bookshelf, I’ve read Jean Johnson’s terrible “A Soldier’s Duty”, I’ve heard about “50 Shades of Grey” that, believe it or not, started as a fan fic of “Twilight”, extremely dull YA fantasy written by a proper Mormon housewife.

I highly recommend a trip into fan fic world. If there is a series you love that could’ve ended differently, chances are someone already explored the alternatives. Do take a look.

It’s fun, it’s free, it explores worlds we know and love way more thoroughly than their authors could in their original works. The world of fan fiction is 95% garbage, 4,99% light reading and 0,01% masterpiece. Just like regular literature, only with fanfics we see all the misshapen, ugly attempts, unfiltered by editors and publishers.

It’s worth some attention, from time to time 🙂

Is there one story I could recommend for beginners? Hard choice, my favourite stories play with tropes I know from reading earlier, less sophisticated attempts. But some of my accessible favourites:

Tvtropes’ Fanfic Recommendations page – safe place to begin, every story here has been read – and enjoyed – but a few intelligent human beings, so you won’t be treated to any Snape/Harry love stories by accident 😉

fanfiction.net – for advanced readers, knowing what they want to read – vast archive (millions of stories!! hundreds of thousands of them novel-length!!) but no easy way to filter the filth

DLP – great forum where some of the best stories are made, under meticulous peer review. Mostly, but not only, HP stories.

While I wrote everything in this post that isn’t marked as a quote, and the sources of all quotes are clearly stated, three wonderful illustrations were found on the internet and I claim no authorship. As far as I know all of them are widely used in many places on the net, but if anybody can point me towards their creators I’ll respectfully ask for permission and, of course, remove them if told to.

4 thoughts on “A short introduction to fanfiction.”