Piotrek: Re-enchantment’s second meeting with the MCU. A TV-series this time. The biggest of a few that began to supplement big movies from 2014. Second season is over, third – confirmed. Artistic child of Joss Whedon of Buffy, Firefly and Avengers fame (among other projects), it features S.H.I.E.L.D. Agent Phil Coulson and his team’s struggle against… well, here comes the dilemma, what can we say without spoiling too much. For the time being let’s say “various powerful enemies”. But before we go into details of the series, we should marvel at how it all fits together. And in a net of stories that make MCU, Agents of S.H.I.E.L.D. series is an important thread. It has its own important revelations and development, but it also connects and complements the movies. That’s quite revolutionary!

Ola: Agreed. However, let’s be fair – as TV series go, S.H.I.E.L.D. is good, but not great. It had a rather terrible beginning – I really struggled with it, and actually stopped watching after the first, rather disappointing episodes. In Season 2 there’s also a rather dull period, as if the makers of the series had sudden idea deficit. But eventually I came back to S.H.I.E.L.D. and finished the whole two series, and when it comes to my TV series watching, that’s a lot. What ultimately convinced me, except Coulson ;), was the interplay between the series and the movies. At the time of Captain America: Winter Soldier it really was a – maybe small, but very satisfying – revolution.

Piotrek: Phil Coulson was introduced in the first Iron Man (his first appearance ever, he’s not in any pre-MCU comic), then in most of the following movies, finally to die at the end of first Avengers. And be resurrected in TV-series.

Piotrek: Too late 😛 And, after all, it’s quite a normal turn of events for a Marvel hero, whose deaths are rarely final. He’s my favourite character in the series. A gentler, friendlier Nick Fury, who has the experience, and integrity required to rebuild S.H.I.E.L.D. after its fall in the Winter Soldier. If he manages to deal with the consequences of his resurrection, which was quite unnatural and ethically dubious. But it’s not a TV-series about Coulson, it’s an ensemble cast, where several key characters have similar importance.

Ola: Yea, it’s Coulson’s series all right. His role may be downplayed and shown as one among many, but ultimately I watch S.H.I.E.L.D. for him :). He’s such a nice guy. Normal, at least when compared to the super-god-like-heroes who form the core of Marvel universe. Quirky, and definitely not omnipotent or ideal, but that’s exactly what makes him such a viewer’s darling.

Piotrek: Melinda May, “the Cavalry”. Strong female character and Coulson’s non-romantic partner. Tough enough to take on adversaries of superhuman strength, loyal to the bone… my second favourite character, right till the final episodes of Season 02. When she lost one of her defining characteristics and some of the appeal. Acquiring some depth, but not of a very sophisticated kind. I preferred her strong and devoted.

Ola: I don’t agree. May is a strong, intriguing character, who for the most of two seasons was rather unfairly shown as one-dimensional. The end of Season 2 gives her a bit of depth – even if it is a depth tailored for 12-year-olds. My bet is that every fan of Marvel has one hidden deep inside. It’s just the matter of letting the irritating rascal out.

With May comes Ward, my biggest disappointment of the series. And no spoilers 😉 A guy who had all the chances to become something more than just a poster boy – or an empty board on which the makers of the series write whatever they feel like at the moment. He feels totally flat. It may be an actor problem, but I’m convinced that mostly it’s a screenplay problem. He’s irritating, used as a Deus-ex-machina more than once, and through this overuse is extremely predictable.

And of course Skye. The girl who was supposed to be the centre of the series. It’s her coming-of-age story, after all. And she’s… ok. She’s likeable and her evolution throughout the two seasons is shown in a convincing way. Her story arc is interesting, but what’s more, it gives the whole of the series the continuity it sorely needs. Skye is the glue of the team as well. I’d say that she’s necessary, but not the most important.

Piotrek: Fitz-Simmons. A duo of geek scientists. Clumsy (both characters and actors, was my initial impression), a bit of comic relief (when they get serious, we get The Koenigs). Young and idealistic (naïve) they are the moral spine of the team, and as long as they are on board we can assume everything is all right. When they split, that’s a sign that something is rotten in the state of S.H.I.E.L.D. And their development throughout the series is something I observed with genuine emotions. Gradually loosing innocence, while keeping their ideals intact. Sometimes going really far, but never going too far (in my book).

And finally, Hunter, a cynical mercenary with a heart of gold. In the end, revealed to have more loyalty and conviction than some other characters. Surprise… By the end of season joined my favourites, but one of the reasons was that suddenly there were many vacancies…

Ola: Hunter is the additional comic relief, quite necessary in the face of Fitz-Simmons changes. He’s funny, steadfast and loyal to a fault, and would be quite unbearable if not for his big mouth. Hunter’s unceasing commentary gives the Agents of S.H.I.E.L.D. a breath of air, vital especially in the more bloated with self-importance second half of Season 2.

Piotrek: There are also, as in every TV series, some character I wanna see dead. ASAP and, preferably, in a very unpleasant way. MCU’s parody of Commander Adama (played by himself 😉 ), Skye’s [spoiler alert] parents, The Betrayer… they all have their spots in deep circles of hell, for various reasons. But one of them is sure to return for season 03 😦

Ola: Yes, and he’s already got his special mention. He makes many people bloodthirsty, and I count myself among them. Why don’t you just die, …?

Piotrek: There is no single “best episode”. It’s a series of mostly good episodes that grows on you. I fully appreciate it as a part of MCU. Not the best part, but a great supplement. More backstory, development of some interesting characters, introduction of the whole inhuman issue, slow rebuilding of the S.H.I.E.L.D.

Ola: Hmm, “mostly good” is an adequate description. There were several episodes that will be quickly forgotten, even by their makers – they were so weak. The beginning of Season 1, the middle of Season 2 are just the first examples that come to mind.

Piotrek: Some scenes I really liked, some were funny, like “incoming file transfer”: 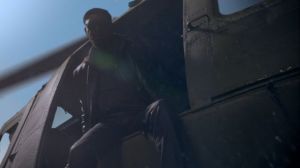 What I found most annoying… the coup in the middle of season 02. Commander Adama, the destruction of our team, shattering of trust that was too easily regained near the end… Simmons, and especially May… how can they get back to what they had before?

But anyway, Agents of S.H.I.E.L.D. won its place in the MCU. But the real gems are smaller series, two of which are already out there, with more to come. We’ll probably write something about them as well – they definitely deserve that. Agent Carter, Marvel’s take on Mad Men, and Daredevil, dark side of the world with superheroes that Arrow could have been. Because, as with movies, DC lags behind. And even “Supergirl” isn’t going to change that…

Whedon already did that better, with Buffy. And he’s in the Marvel side of town.

Ola: Ooh yes – the question that comes to mind my quite often is: why DC movies (with exception of Nolan’s trilogy, of course) are so much worse than Marvel’s? One idea is that DC simply treats its origin too faithfully… Apparently a bit of ironic distance is all that’s needed to give Marvel the winning edge.