Have you seen „The Sword in the Stone”? Nice Disney classic, „not much plot but great for little kids.” as an imdb reviewer noticed. I concur. It’s a nice watch, it’s deeper than most Disney movies even. But it’s just 10% of shiny stuff taken from the top of the novel that inspired it – the first part of “The Once and Future King” tetralogy by Terence Hanbury White.

A tetralogy consist of “The Sword in the Stone”, “The Queen of Air and Darkness”, “The Ill-Made Kinght” and “The Candle in the Wind”. There is also “The Book of Merlyn”, published posthumously, book that I prefer to pretend do not exist. They tell the story of king Arthur, from childhood to (spoiler alert) hist death in battle with Mordred.

The book is not for kids. There is humour and songs, just as in animated version, but it’s also slow paced, written in very demanding language and very long. I wouldn’t recommend it as a first encounter with Arturian fantasy. Start with some basic one-volume version of the story, see a movie or two, follow up with “The Winter King” by Cornwell, if you like history novels with warlords and battles, or “The Mists of Avalon”, if you are into feminist deconstruction of history and literature. But White’s retelling of the legend is the pinnacle of Arthurian fantasy. Readers already familiar with the story can fully appreciate this particular interpretation. It’s more than a very good fantasy book. It’s genuine Literary Fiction 😉

Written just before and during the Second World War by an author who graduated from Cambridge, having written his thesis on Thomas Malory’s “Le Morte d’Arthur”, famous XV cent. codification of chivalric tales of King Arthur and his knights. White’s perspective is darker, through tragic story of a noble ruler he speaks of ultimate frailty of human endeavours. The blow is softened by White’s warm irony and the underlying certainty that it’s a worthy goal to try to build something good, even if only for a time, and to be a good man. 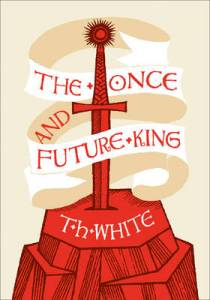 The story is known. It varies from one version to another, but the basics stay similar. Here we start with young Arthur, raised in obscurity by a minor provincial knight and then taught by great Merlyn, who uses rather unconventional methods (such as changing into animals to learn the ways of nature and society).

“I think I ought to have some eddication,”said the Wart, “I can’t think of anything to do.”

Arthur draws a sword from stone, becomes king, unites the country, builds Camelot with its Round Table, sends his knight first to their famous quests. His constant struggle to harness Might into the service of Right – civilising his brutal country and ensure freedom and a chance at happiness for all its inhabitants. To end a world of violence, where regular people suffered and

“Those who lived by the sword were forced to die by it.”

Yet, Arthur’s downfall is unavoidable from the beginning, and his unaware original sin is committed when he is seduced by his half-sister, Morgause, which leads the the birth of Mordred. In White’s words: “ He did not know he was doing so and perhaps it was due to her, but it seems, in tragedy, that innocence is not enough”.

The second main subplot is the story of Lancelot, his affair with Arthur’s queen Guinevere that tears the realm apart and allows Mordred, raised by Morgause to hate his father, to rebel. In final battle both Arthur and Mordred die and the good king’s attempt to create ideal kingdom fails. But not the dream of Camelot, as Arthur, riding into his final battle, claims, that there will be a new Round Table, “a table without boundaries between nations who would seat to feast there”.

Are great. First among them – Arthur, whose transformation from a naïve boy, through young and fierce warrior, to wizened and gentle ruler we observe closely. In the start ha claims “I should have liked to go to war, if I could have been made a knight. I should have liked the banners and the trumpets, the flashing armour and the glorious charges. And oh, I should have liked to do great deeds, and be brave, and conquer my own fears. Don’t you have courage in warfare, Badger, and endurance, and comrades whom you love?”. Simple, chivalric approach to war is short lived in our hero, who learns of its atrocities and strives to eliminate it from his lands. The main stated goal of sending knight of the Round Table to quest for justice and glory is to channel the energy of most violent men in the kingdom into something harmless and positive. Arthur is a gentle, decent man who cannot bring himself to hate his wife and best friend after their betrayal and pretends not to notice their affair until he’s forced to act by jealous courtiers.

“Mordred and Agravaine thought Arthur hypocritical—as all decent men must be, if you assume that decency can’t exist.”

Just as important is Merlyn. Living through time backwards, he is not only a wizard of great intellect and power, but also a source of comedic relief and many anachronism, muttering to perplexed knights about trains and warmongering Austrian painters. He gives young Arthur wisdom and humility, shows him the evils of violent society around them and inspires him to make an attempt of building a better kingdom. Then he accepts his imprisonment by Nimue with dignity and resignation, and as a chance to rest, fearing only that he might have forgotten to teach Arthur everything he needs.

Lancelot is different than usual. Far from being the fairest of knight, he’s butt-ugly and unsure of himself, aware of his violent nature and loving King Arthur for his vision of the better world. And destined to betray him and start the chain of events leading directly to his ruin. Tragic love

Women. Well, that is not White’s strongest point. To be fair, this is a story about knights taking place in a world with no female knights. So don’t be too hard on the author. We have witch-queens like Morgause, with significant influence on the events, we have a complicated and tragic heroine in Guinevere, we have Elaine, whose love for Lancelot remains unrequited, but bring Galahad into the world. It’s mainly a men’s world, but it’s fate is to a large degree decided by Morgause’s revenge, Nimue’s entrapment of Merlyn and Guinevere’s affair with Lancelot, where she is an active force, not just an object of desire.

The review is already getting too long, many topics were left out, some of which I will, sooner or later, mention in “meta” text dealing with Arthurian mythos as such, not particular installments. One day… Main point of this short text is – the legend of King Arthur is one of the constitutional stories of modern fantasy and “The Once and Future King” is one of its finest versions.

And then there is “The Book of Merlyn”, the final Arthurian book by T.H. White. Parts of “The Sword in the Stone” that were justly left out of the original edition and cheap pacifism of the extended version of Arthur’s last moments. In my view – it’s contrary the the message of the main series. There – we had hope and joy despite tears and toils. Hope of a better world, because :”The hope of making it would lie in culture. If people could be persuaded to read and write, not just to eat and make love, there was still a chance that they might come to reason”. Here – condemnation of humanity by anthropomorphised animals representing the ideal of peaceful nature.

“The Once and Future King” is not only my favourite version of the Arthurian mythos. It’s also a favourite book of Professor Xavier. It inspired a few scenes in “The Magicians” by Grossman. And it heavily inspired “Knightriders”, one of the most bizarre versions of the story, but unexpectedly good.

Oh, and the perfect edition of this masterpiece will be soon in my library 🙂